42 is the The Answer to Life, the Universe, and Everything but apparently not joseki. How to answer correctly? 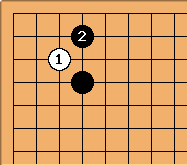 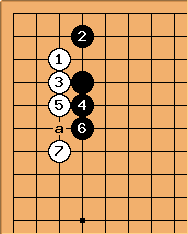 Bill: This looks good for White. Playing more strongly as Black, for instance,

at a, seems problematic because of the weakness around 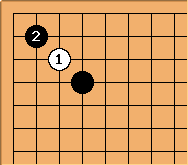 Another odd response to the 3-3 invasion.

This happened in a blind go game with a much weaker opponent. For some reason, the 2-2 ended up living. I'm sure this is not joseki, or even reasonable. I've played through a few results, but I'd like some advice from some stronger players. what result should either side expect? 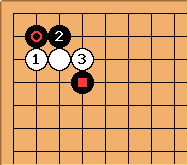 here then the exchange

is very bad for Black (see small gap). Even if Black lives 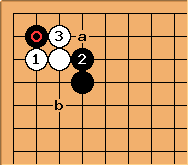 So it should be

here, I guess. Now Black chooses a side to block, but has some difficulty making convincing shape. Maybe now Black a, White b.

On the other hand, perhaps White should treat

as an out-and-out mistake. 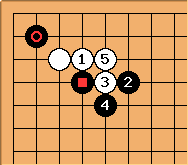 is the class play. But not a great deal Black can now do about 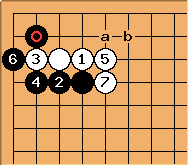 Bill: As White I would not worry about

Black threatens to save

, Black can play the two step hane with