is a relatively modern move, which became quite popular from the late 1980s onward. The aim of the move is to keep sente. In professional play, a has been the common response. Since the advent of strong bots,

has been the usual move in the invasion patterns, and b is the most common response.

exchange, Black can play away, if the board is mostly empty, to be the first to play in an either empty or 1 stone corner.

The price for playing away is that White can play a. Black remains with a wall without extension. AI bots have evaluated this as playable for Black.

If Black continues here, he should do so at a, b or c. The simplest move is a, but c is most common in professional play. 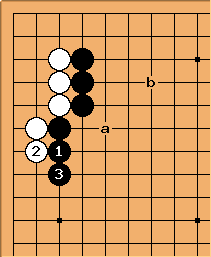 builds a wall, but it has the disadvantage of giving up sente. White can try to peep at a, but she has to reckon with the possibility of Black withstanding the peep with a move like b.

If Black plays double hane at

, he can take sente upto

. Later, a ko can be fought with Black a, White b, Black

. White can stop this by playing c herself. 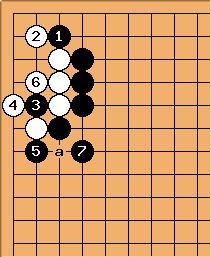 With the inside hanes at

, Black forces White into the corner, but loses sente. (

can also strongly connect at a). White can play elsewhere 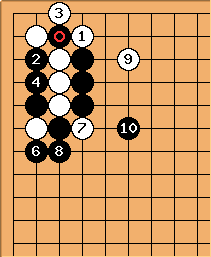 White can resist like this. She gets out in sente with

, but Black makes a lot of profit and gets central influence. 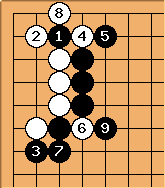 Using the inside and outside hane, Black locks white into the corner from both sides. 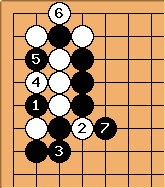 If Black doesn't mind giving up the top, he can go all out for the left side by playing

If Black plays tenuki, White has two main ways to continue, one peaceful, one fighting. This shows the peaceful variation, where White secures the corner territory and a connection to the outside while weakening Black's wall. Black however has sente again. 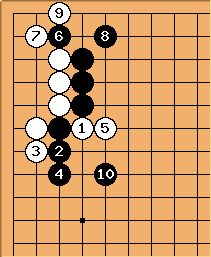 Playing atari on the other side with

leads to a fight upto

. The moves shown here are a common continuation, but as usual in fighting joseki there is a lot of room for variation, and the fight is only beginning. 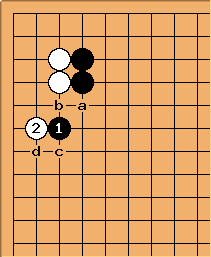 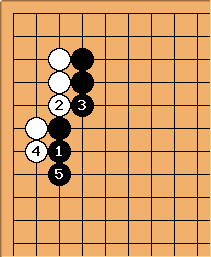 Black c leads to this variation, in which black loses sente. However, black can sometimes tenuki after

, making it harder to tenuki.

In pre-AI games (2016 and earlier), white would often play hane and connect with

before pushing down the side. Black can sometimes tenuki after 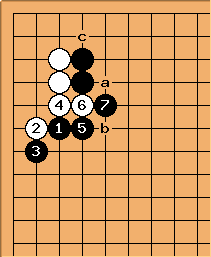 is played as hane, starting a fight. After

, white will usually cut at a or b, although c is also seen occasionally. 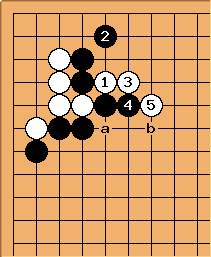 relies on a ladder -- but for parallel fuseki, the ladder will normally be in white's favour.

is a key point of this shape. After

, black can continue at a or b, and a complicated fight will follow. 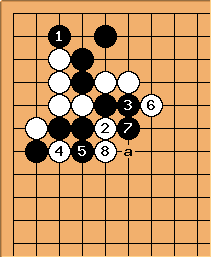 If white's ladder at a is broken, then white collapses. Instead of cutting at

, white has to give way by playing 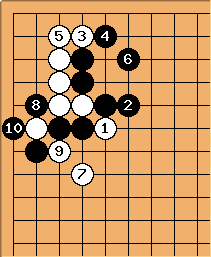 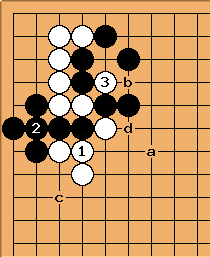 Black can continue the fight with any of a through d 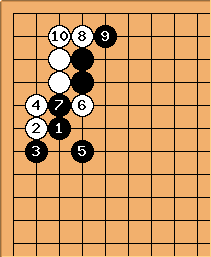 Instead of fighting with

, white can try this more peaceful continuation. After

, Black will try to hem White in in the corner, but White can still decide to fight by playing 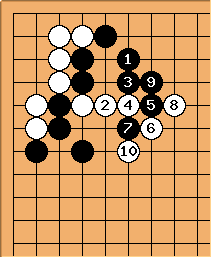 This diagram shows one possible continuation.

Chris Hayashida: There looks like there's a problem with the continuation. Black will just extend from

and capture three stones. Is Black supposed to play an atari first?