Automatic invasion at the 3-4 point

If the opponent plays 3-5 or 4-5 in an empty corner take 3-4 point immediately. This advice by a pro that I've read somewhere has made a great impact on my results. Previously I use to be scared to reply with komoku, because it seemed to me that was what the opponent wanted. But waiting for further development did not pay out. As soon as I started to play komoku it turned out that the opponents didn't actually know why they did play 3-5 or 4-5 moves.

It does pay to at least do a little reading out. A friend of mine and I, who play often, have learned to be very careful in our approaches to each other's 4-5 points and 3-5 points. More often then not, in our games, 3-4 is not the right answer and gets us into trouble. Consider the following diagrams. -BlueWyvern 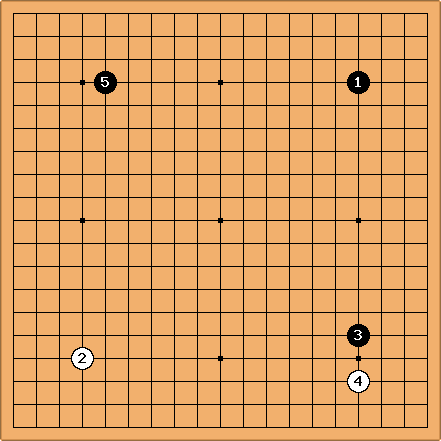 If White mindlessly invades the 3-4 point the result is very bad. I once played a game with this opening as Black and dominated the rest of the game. The problems are all because of White's haste to invade the 3-4 point.

Keep in mind however that the move

is not ideal.For this reason, in pro level games it is rarely played. A database search of over 68,000 pro games shows that after

is the move that wins the least.

However, playing the 3-4 invasion as

is a bad idea leading to the position described in The Direction of Play.

This position appears in The Direction of Play by Kajiwara Takeo 9-dan (albeit with a different move order). Of it he states, "White then has virtually nowhere to play that doesn't help Black. Black's twin salients radiating from

control the centre because of their high position. You must learn to appreciate that this is a very desirable position."

HolIgor: Interesting. So, I guess Kajiwara advocates a move in the upper left corner first:

BlueWyvern: In case you are interested, the order of moves in the book gives

, (which he states as a horrible disregard for the direction of play),

played as an approach at 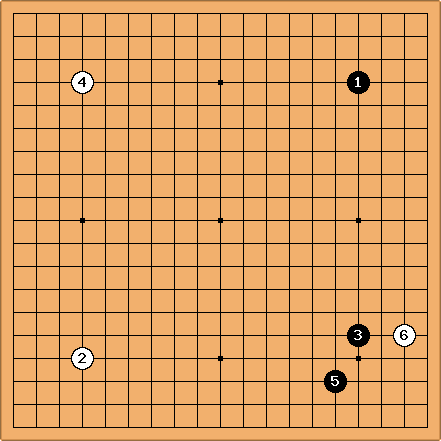 is not intended for immediate play, naturally.

(3554 enclosure), rather than the small high enclosure), because White can't in practice prevent such an enclosure, if Black wants to build it in his first corner. That should be endured. 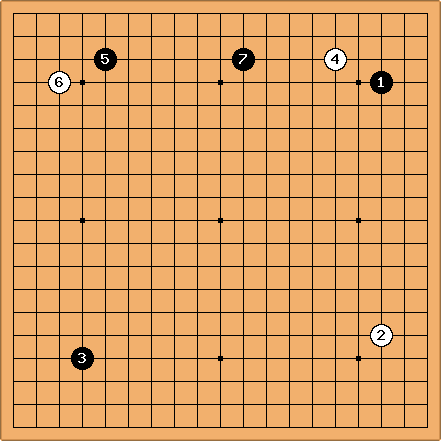 Another example from Kajiwara's book. If White mindlessly invades at

with 3-4, we are dealing with something known as opposing 3-4 points. Once again, White's automatic invasion of the 3-4 point gets into trouble. Black's combination extension and pincer gains the advantage on the upper side.

A 3-dan in our local club always advices us mere mortals to leave stones like the 3-5 or 4-5 stones alone until the rest of the board is more settled and it is clearer which benefits can be had from the various approaches to these stones.

Another argument is based on e.g. the taisha having so many variations and pitfalls that you should wait a bit before committing yourself to something which is difficult to control.

HolIgor: That was my usual appoach until I heard some hearsay (heresy :^) that some pro advised to take the komoku point as soon as possible. I thought that it won't hurt much to try. I tried it in several games and so far I like it very much.

And what about taisha? I think that some day or other I will have to play it in order not to give in somewhere. And it will be fun. What does it matter if I lose several times because of the difficult variations. I find it almost impossible to study those variations before I have played them in a game. As soon as I misplay taisha once I will know where to look, and what the difficulty was. So far, nobody wants to play anything involved :(.

MortenPahle: This is an interesting subject: are there any differences in the way you should play serious games (to win) and other games (to learn/progress)?
Never playing anything new is evidently self-defeating and utterly boring - playing weird and wonderful moves makes for interesting games. But I would probably not play that way in tournaments unless I was desperate. Anyhow, I would stay somewhere in between the two extremes, I suppose. What are the opinions about having a Different Attitude to serious and learning games?

BlueWyvern: My main point here is that any advice advising players dogmatically "always to do x when y occurs" should be taken with a grain of salt. Actually as far as HolIgor's original advice, I'd agree that invading a 3-5 or 5-4 point is usually the right choice, and people often have no idea why they played it. But I don't think it is always the case, and I would say that every move especially in the fuseki requires careful consideration of the whole board position.

DaveSigaty: As described in different attitude to serious and learning games, I play serious games when I fool myself about what I am doing! As a result, when I am engaged in my normal learning games I almost always choose to enter at the 3-4 point against either 5-4 or 5-3 stones. The exception is when I think of a logical reason (based on the overall fuseki development) to choose something else. Since I normally challenge my opponents quickly when they choose 5-4 or 5-3, this usually is not the case.

Similarly I normally choose to let my opponents form the Chinese Fuseki and then play against it. In other words I do not avoid the Chinese just because it gives me problems (which it often does), rather I seek the opportunity to practice against it. Only since I contributed to plays against low Chinese opening have I been using what I wrote to avoid the Chinese (so far I am 2-0!). Yes, it is true, I inflicted my opinion on my trusting SL colleagues without ever trying it out - for shame!

Shortly I also want to try HolIgor's Tengen anti-chinese which I find interesting. I also have in the back of my mind that Bill's Manchurian Fuseki is whispering "Try me!" as well. These are very interesting ideas that will not find their way into a serious game - which is a great reason to avoid serious games!

Tapir: Everything with an "automatic" in it rings my "don't forget about choices"-alarm. It seems to be a case of learning in stages, when you don't dare to play near the dreadful 4-5 stone, you will improve by playing 3-4, as you start to recognize that the 4-5 stones isn't as deadly as it looked earlier to you. Often, in my opinion, 3-3 is more effective and usually leads to Blacks influence facing in the other direction. Having this way of play in your repertoire will frustrate the plans of many players who count on your automatic 3-4 invasion.