It has been suggested that the content of this page should be merged with Computer Go Programming.

In March 2016, AlphaGo defeated professional player Lee Sedol (9p) 4-1 in 19x19 even games. (From 2002 to 2016, Lee Sedol won 27 major go tournaments.) Before the match with AlphaGo, Lee Sedol was confident in predicting an easy 5-0 or 4-1 victory.[3] AlphaGo's victor represented a significant jump in strength of computer go programs, as computers had previously only managed to beat pro players with a 4-stone handicap. Below are a table and graph of the first time a computer beat a pro player and at each handicap. (See also KGSBotRatings for progress measured by rank on KGS.) 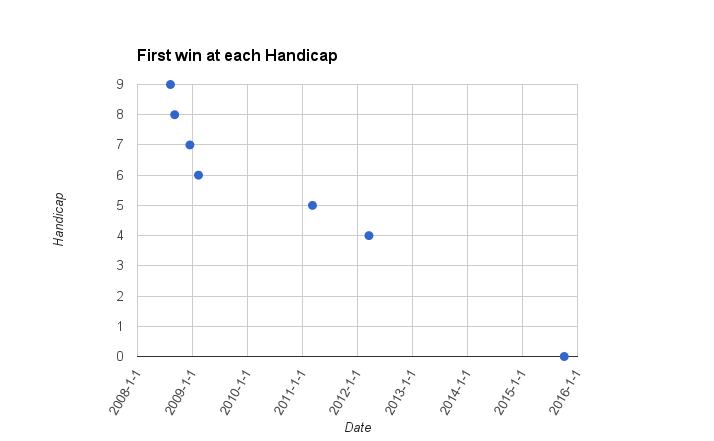 Go has a higher state-space complexity than many other popular, deterministic games of perfect information that have been computerized and was, therefore, one of the hardest to design a computer program to master.[4] The result was the progress in computerized go took significantly longer than other, similar games.

1968: The first go program to play a full game of go was Albert L. Zobrists program in 1968. The first time a computer competed in a human go tournament was in the 1980s, Nemesis at the Massachusetts Go Club. More details?

1995: Professional player Janice Kim defeated the top program of the day despite a whopping 25 stone handicap.[CitationNeeded] By the early 2000s, computer programs {which?} were snapping at the heels of amateur 1 dans - a considerable improvement, but still light-years away from the realm of top human professionals.

2006: A new approach to go AI began sweeping the go scene: Monte Carlo (MC). This method builds a tree of potential moves and responses, but evaluates each move in the tree by using a semi-random playouts. In a playout, the program plays the game to completion, using either random moves or very simple heuristics. When a playout results in a win, that improves the score of the moves it originated from, and the best performing move is chosen. As of 2012, a program playing on KGS has reached 6 dan. Naive extrapolation would have predicted computers reaching professional strength sometime between 2015 and 2018. AlphaGos achievement was faster than predicted by most experts. 2006 was also the last year that GNUGo won the CO?.

2006-2012: MC program made significat progress, showing adeptness at harnessing the last several decades of increases in processing power. Zen19 has achieved excellent results; see below for an in-depth discussion. Other go AI projects, including Aya, Pachi, and CrazyStone, are also working with MC methods.

2012-2015: Progress slowed again as further benefits from MC created little improvement. However, in 2015(2014?) a paper was published showing the promise of using Neural Networks?.[CitationNeeded] Several bots incorporated this new technique, and it enabled Zen19 to reach KGS 7d.

The Challenge of Computer Go

Go has much higher state space complexity than most other games so it will take longer to find an algorithm to play at a high level than other games.

Thus computer go is a very exciting part of Artificial Intelligence (AI), and many new ideas and techniques are yet to be discovered. It is interesting to note that in Chess, with a much lower state space complexity than go, the computer proved superior to the top human players much sooner.

In fact, go endgames have been proven to be PSpace-hard?, let alone other parts of the game. Also, many other aspects of go, including life and death, are also known to be NP-hard?. This means that it is very unlikely to be able to find a reasonably fast algorithm for playing perfect go. So it looks like it's all about heuristics (surprise surprise). Or it means that it will take a long time to find a reasonably fast algorithm to play go at a very high level.

Patrick Taylor: I'm not sure heuristics are all that bad. Humans don't know the perfect move sequence any more than computers do. Therefore, we basically play with heuristics as well. Proverbs are essentially heuristics used by human players to approximate good play.

In July 2011, KGS records accurately show computer program Zen19s achieving 4 dan. In June and July 2011, Zen19s played 700 games on the KGS go server. Zen19s plays at 20 minutes main time and then 30 seconds per move. A player can download the games of Zen19s from the KGS server. The player can study the games to find the program's weakness and try to exploit it. After 700 games and almost 2 months, Zen19s is 4 dan on KGS. This shows that finding the weakness of computer players is just as hard as finding the weakness of human players. Computers have truly reached the 4 dan level. Successful chess programs do not use brute force, but are selective in finding a move. Chess programs that use brute force, play at a low level because of the huge branching factor. Chess programmers do not use fast algorithm for playing perfect Chess. Mark Schreiber, July 22, 2011

It is natural to want to know both which go program is the strongest, and how strong it is. However, due to the recent progress of computer go, a definite answer is complicated.

It has been argued that the ranks on KGS are deceptive, because with sufficient practice playing against computers, a human can often adapt to the weaknesses of the programs and subsequently perform much better against them (see the Shodan Go Bet for one attempt to confirm this idea). Also, it is a common belief that on the go server people tend to take games against computer opponents less seriously.

Zen has lost some monthly computer go tournaments on KGS to both CrazyStone and Pachi, and lost the 2013 UEC Cup to CrazyStone on points, despite beating CrazyStone in the direct match-up.

Zen's reputation was established largely by two convincing victories over Takemiya Masaki in March 2012, at five and at four stones. Zen has scored other victories over pros, as well. However, it is not clear how seriously professionals have been taking these exhibition matches. At the TAAI2012?, for example, Zhou Junxun used 8 minutes of his 45 minutes of thinking time in his game against Zen.

As no professional system has awarded Zen a rank or arranged a formal contest between Zen and a professional player, the best gauge of Zen's strength is its rank on KGS. On July 20 2013, the account Zen19d is a strong 5d on KGS. Zen19d was 6d for a few games, but was unable to defend the rank. However, because Zen is only available to play on KGS for short periods, demand is high and many of its opponents play it at times and at time settings that they would otherwise refuse. Furthermore, in July 2013, Zen19d played 346 game, in nearly half of which (147 games) Zen gave three or more handicap stones; giving six stones in 10% of the games (34 games); high handicap games favor white. It remains to be seen what rank Zen can defend on a long-term basis.

However, stubborn sceptics have consistently claimed that the KGS ranks of strong programs are inflated, and have been embarrassed by the programs' fast progress again and again. Programs went from 2 kyu in 2007 to 6 dan in 2012. See KGSBotRatings.

It might be entertaining and educational to consider strategies for beating computers at go.

The current generation of strong Monte Carlo programs may be confused by ko. Also, while the weak go programs of the 90s were relatively strong at the endgame, this is no longer a special strength of bots and it is possible to make up points in the endgame.

Some online go servers, such as KGS, provide software opponents or robots to clients.

PatG: Robot is derived from the Czech word robota meaning drudgery or slave labour which certainly describes the work needed to pummel double digit kyu players like me.

Robot Substitution Gameplay has been proposed, but not yet developed.

By 2020, a number of computer go programs have surpassed ELO levels of top professionals, including open-source software running on consumer-grade PCs (see

The above rating results of katago g170 have been reached with 1,200 visits per move. However, the AI-based game analysis of

go-insei.ai is based on 8,000 visits per move, leading to more than 500 Elo additional strength.

In post-AlphaGo era top AI tournaments are held in China and the winners are often Chinese AI programs. Most prominent are Chinese tournaments World AI Competition coupled together with Women Go Seigen Cup in Fuzhou and CITIC Securities, and Japanese UEC Cup and AI Ryusei.

Below are competitions where the strength of go playing programs can be tested. For a full list of all senseis pages refer to AI Tournaments and Events List.

game of perfect information is a game with no element of chance, where all players have complete information about the moves made by all players. For example, go and chess fall into this category, while poker, bridge and

mahjong do not. N.B. In standard usage, a

game of complete information is a game where players know each others options, but not necessarily their actions.

Patrick Traill: To Do Check usage re deterministic, link to Wikipedia and/or articles on CGT or similar here. Maybe tie into articles on game theory and CGT.