Some Philosophical Questions about Computers and Go

Please feel free to answer a question, pose a new one, rant about the author, etc.

How long will it be until a computer is clearly the Go champion? 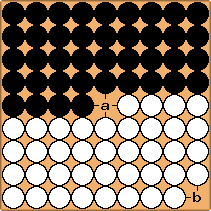 Even on this 9x9 board, to read it out to the end would be almost impossible. But you or I can easily say, with great confidence, that a is the correct move for White. But I'll happily admit that you could come up with an example where it takes an incredibly long time to figure out the best answer (indeed, I know of some, often called "the hardest problem(s) ever"). What I'm conjecturing is that the latter is the minority, and on average, the time take to find the best move increases linearly with the board size.

Herman Hiddema: I think the best move for white is pass. Black is dead, capturing these stones only gives him a chance to perhaps live inside to area opened up.

Bildstein: Good point. I suppose I have to admit that even in this trivial example, I failed to find the right move. Anyway, if I can be forgiven for that, let's assume we're playing no pass go.

aceofspades: Sorry to go back to the beginning of your discussion, Bildstein, but didn't you mean an O(n) best-move algorithm, since that does in fact mean a function bounded by a multiple of n, but Kirk interpreted your A to mean an arbitary function?

robw?: This discussion is probably long over, but I have real problems with the phrase "best move". In the case of the 5x5, it seems that someone has proven that there is a best set of moves that will always lead to victory. Is there actually a proof that says that the same thing goes for 19x19? I mean.. lets say you have a group in the corner and you and your opponent are fighting over 20 points. Your opponent makes a move that seriously threatens this group. Let's even say that almost all pros would agree that you should go there. Who is to say that there isn't a shape on the opposite side of the board that has an unavoidable path 20 moves deep that leads to a 40 point gain? Maybe no human is able to read this move... and the number of possible positions is beyond the number of atoms in the universe. It may still exist and could be considered "the best move" by god or whatnot. To expect a human or computer to make the "best move" seems very artificial to me.

If a computer becomes champ, will Go still be interesting?

When a computer becomes champ, will anyone care?

Intuition is likely unreliable in these matters

As a strong computer programmer (with an interest in AI), and a weak Go player, I'd be very reluctant to make judgements about computer Go. It's obviously a very hard problem, but I think that for someone's intuition about computer Go to be especially valuable, they'd need to be an upper-level dan player and have a talent for innovative AI solutions. There's a couple of possibilities, none of which are mutually exclusive, and it isn't easy to guess which might apply:

Rarely are interesting AI problems solved by search. It's often a leaden, uninspired technique. You've got to look for either a sudden insight or a methodical understanding of the actual problem.

A lot of supposedly hard "AI" problems get partially solved when somebody comes up a key insight--for example, the MIT "eigenfaces" algorithm boosted face recognition from 20% to 90+% accuracy by applying undergraduate statistics cleverly. Spam filtering went from horrible to 98+% accuracy with the discovery of a clever hack inspired by Bayesian probabilities.

Other times, progress in "AI" problems comes from dutiful enumeration--and tweaking--of hundreds of rules. For example, look at the sudden jump in bot quality in Counter Strike: Condition Zero. This was based on a few clever algorithms and lots of hard work, carefully enumerating hundreds of human-like behaviors and limitations, and testing their interactions extensively. The end result is fairly similar to playing against real humans, but only because the author was an expert Counter Strike player.

Thus, any workable solution to computer Go is likely to be surprising in nature. Certainly no low-level Go player understands the game well enough to know what problems need to be solved to play at a consistent 1p level, and few professional dans have spent enough time studying AI to have a good intuition for what novel techniques might be available. Even then, a few hundred dan-level AI hackers could overlook important tricks for a decade or two, only to be surprised by an AI "tesuji".

erislover: I think the last sentence there about an AI tesuji is critical to understanding the philosophical issue here. We have a baseline of professional strength as a measure of go-playing ability. Indeed, amateur players emulate pro play to the extent that they can, study joseki (which is just another name for "what pros play"), and so on. Only late in the endgame when the search space shrinks considerably can computers overtake even professionals in their calculating ability.

This sets us up for a very bad problem: a novel advancement in a certain area might be overlooked for the lack of advancement in the rest of the game. A correct algorithm for some particular line of play might surely be excellent, but the mistakes made elsewhere could overshadow it. Unless the assumption that pro players are playing correctly is correct, we could easily miss strong routines by artifically selecting them away. Perhaps opening on tengen is always the right move in an odd-sized board. Perhaps the ideal opening is always two to five moves from a corner, and this just happens to be the center point on smaller boards. Who is to say?

Since go is a zero-sum, perfect information game there is a perfect line of play. But since it is incalculable, it might as well not even exist, IMO. Faith does not really move mountains and if such play is computationally unknowable then it seems quite likely that game-theoretic approaches to play are flawed from the start. As I often like to ask, suppose a powerful being approaches you and claims to be god. What is the difference between a finitely powerful being that is more powerful than you can imagine and an infinitely powerful being? I think we face such a problem here.

If computers do become as strong as professionals, it will be because we've used professionals as the ruler the entire time. It will have absolutely nothing to do (except coincidentally) with perfect play.

How about a hybrid (human/computer) mix?

axd: The discussion has always focused on machines playing on their own. But how about the computer tracking variations, the human directing these and taking decisions? Possibly disgusting evolution, but cannot be avoided. Some day someone will come up with software that "looks over the shoulder" of a go server player (eg analyse the screen on which the go client is running), and assists in decision making. Unplug the human from the machine and his/her rating will drop, that is most probable. But what we are interested in is in the impact of such players on the GO scene. Should they be quarantined in their own arena?

Quarantined? No. Why should they? I don't care whether my opponent uses a computer to help him (except for playing tournaments or things like that). I will have fun playing. If he still has fun is his problem (I wouldn't, that's for sure). And even if people care what their opponent uses, how could players like these be quarantined? It is simply not possible. Dolgan

KarlKnechtel: I have mentally toyed with the idea of a Go tournament where players may bring along any computerized aids they like, with the restriction that they must have written the software themselves. Might be interesting :)

aceofspades: Um, I know I'm not stating anything specific, but I think some of the most interesting "Philosophical Questions about Computers and Go" are about rating - that is, rank-absolute levels. Much of that discussion relates to computer players, and an ideal tournament of a bunch of Turing machines playing each other.

daniel: I have actually been working on a project similar to this; However the point of the project is to teach people to play. essentially the idea is to first ease the new player into the concepts like territory; influence; etc. then slowly remove those crutches by providing challenges in the form of unlockables (the crutches would only be available against the AI) which could reward with new challenges which would earn points of some kind to purchase accessories; eventually it would reach challenges like difficult tsumego; one color go, multiple opponents; only things that I think would help produce a better player. it also implements the newest version of my "personality" AI engine where the decision weighting code with the newest version using equations to control that (allowing for dynamic behavior adjustment) which should at least solve some problems associaed with learning from a computer opponent.

topic on rgg: The guy who stopped Go Programming Development ...