I (AshleyF) have recently been having some fun gathering patterns and statistics from a large collection of game records.

Statistics from games showing the popularity of points by move number. That is, "How popular is the 4-4 point on move 1?", "How popular is Tengen on move 20?". I did this for each unique point across every move. Below are sample results. This is a vastly simplified view.

Here is a GIF animation of it. Shaded in blue to indicate popularity. Points that are at least 80% as popular as the most popular point switch to red shading.

It's difficult to represent with SL diagrams. 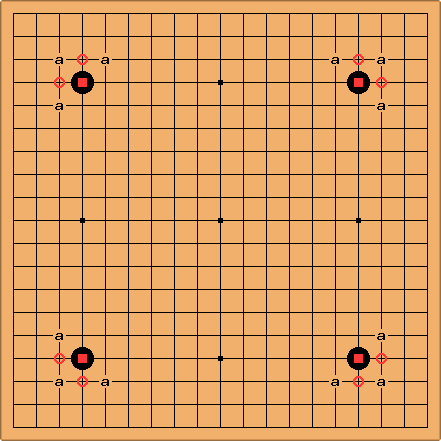 So, obviously the first four plays are in the corners and the 4-4 point is by far the most popular.

DamienSullivan: Might this be misleading? It seems surprising that komoku isn't 80% as popular as hoshi, did you account for symmetry? I note you did mention "isomorphic" way below, but it's still not clear.

AshleyF: Yeah, that does account for symmetry. Komoku is pretty close, but at least in my collection of games I show it at just over 69% as popular as hoshi. A quick double check in SmartGo against GoGoD shows very nearly the same result: of the 32,583 non-handicap games in GoGoD, 17,995 of them begin with hoshi compared to 13,364 with komoku. That's 74%, maybe slightly higher because GoGoD has a lot of older game records... Still not quite 80% though. 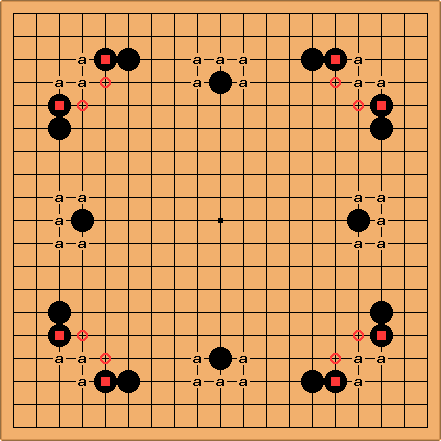 You can see that play #5 is much different. Kakari, Shimari and long extensions have started. 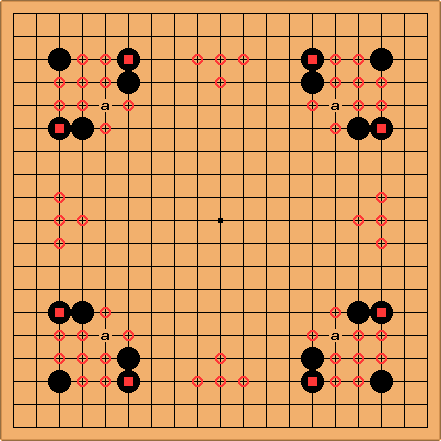 Through play #11, we continue to see the corners being settled and long extensions. 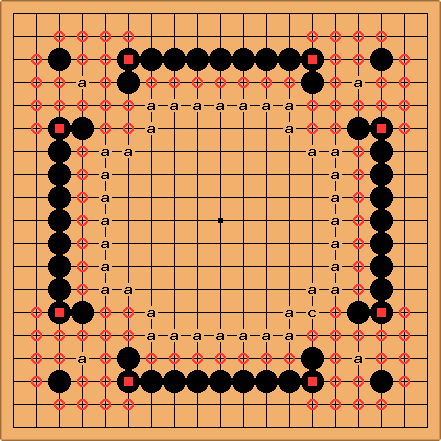 By play #29 the a corner approach is still the most popular point. And the 3-3 point comes in second (90%). Higher approaches and extensions on the third line come in next (80%). 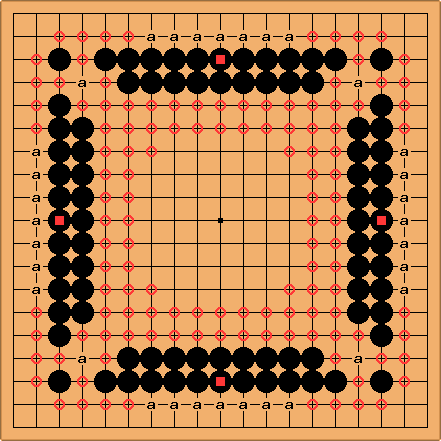 By play #39 things have officially moved to the third and fourth lines along the sides. Strangely (to me anyway) the 3-3 point remains 90% as popular as just below the star point on the side ( 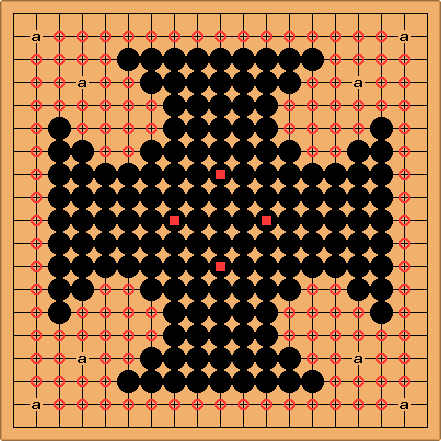 By play #66, things move from the sides to the center. 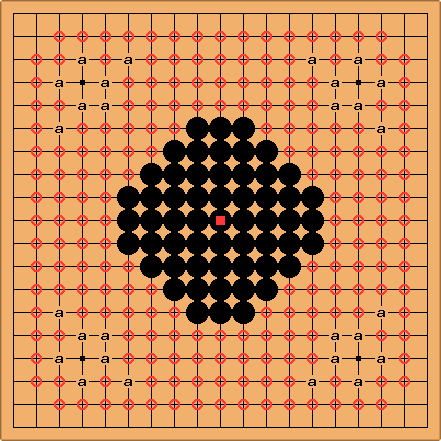 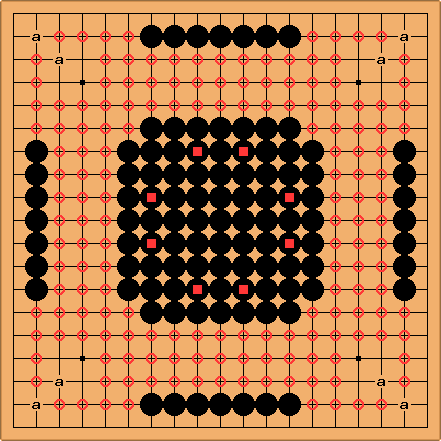 Around play #142 things begin to move back to the sides but on the second line now. 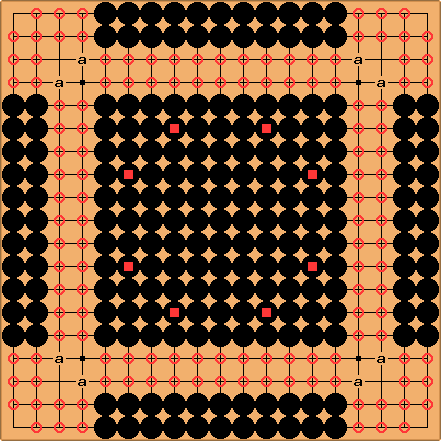 By play #199 we can see that the corners are certainly settled as well as the third and fourth lines. Action is still going on in the center but common play has clearly started to move to the second and even first lines. 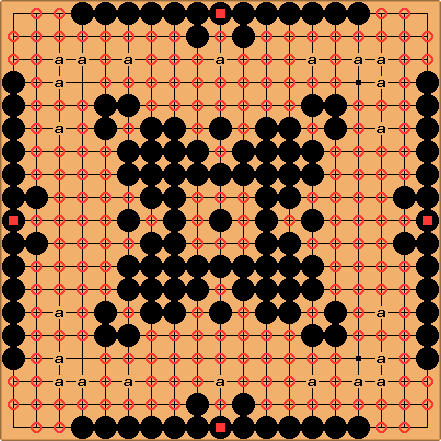 Here the center action begins to die down and the first line becomes the most important. 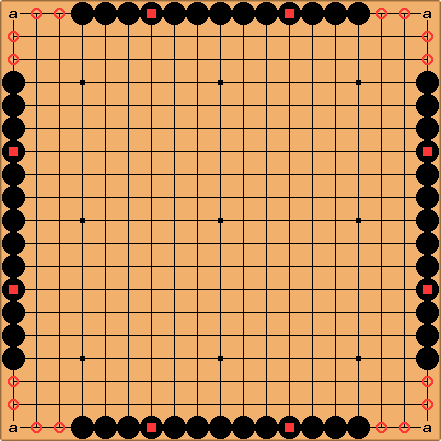 This continues until the first line sides are literally all that's left. It's the same through the end of the game.

Evpsych: Cool! Can you summarize your algorithm?

AshleyF: Very simple algorithm. Implementations differ, but conceptually create a three-dimensional integer array of 19x19x300 to track counts of plays at each point across 300 moves. Read through 32,000 pro game records (SGF files) and for each point played in a game, increment the point (and all isomorphic equivalents) in the array for that move number. That's it. Takes about 2 minutes to run.

Janne Jalkanen: This would make a wonderful 257 frame animation, methinks.

Charles Matthews: These are fascinating new sources of insight and questions.

mAsterdam: I would like to share in the general awe with an original compliment but I can't think of anything nearly as nice, brilliant or insightful as what you show us here. Remember Koyaanisqatsi?

Fhayashi: How different do you think it would be if you did the same treatment to all of Lee Changho's games vs. all of Takemiya Masaki's games?

Karl Knechtel: You found no tengen openings, or even plays near there within the first few moves, in over thirty thousand games? Wow.

AshleyF: The threshold to get into the above diagrams is 10% as popular as the most popular point for a given move number so tengen doesn't show up. In the animation though, you can see a couple of faint flashes of blue at tengen in the early opening.

Klaus: I am deeply impressed, staring at this page with a feeling of awe and undescribable insight. I wonder if there is any break in symmetry within the first ten moves. Sure the first move is most likely to be in the upper right corner? An interesting use for these diagrams might be to check where the "good areas" might be before choosing candidate moves. (Assuming that there is a correlation between likely points in pro games and likely good points in our games.) It might for example offer a hint, when it will be important to switch back to the sides, considering plays on the second (or even the first) lines. This might be very useful for computer Go as well.

FireclawDrake: The GIF animations on this page seem to be broken, which is a shame.