Here's a recent novice vs Viking4 game from NNGS. Where did the computer Go player go wrong? What concept did it not understand? How soon did the game-losing move occur? When would a human have resigned?

Comments are appreciated (I'm still trying to write a Go program). The computer is Black. 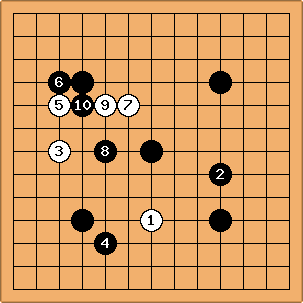 Gorobei: Black 10 seems a bit aggressive when you have a five-stone handicap - should the computer just make the corner safe?

Stefan: Black 10 is appropriate. It separates White into two weak groups. There is no need for Black to defend the corner passively if it is safe dynamically (i.e.: by having two weak white groups adjacent, his corner group should have no problem making life).

Gorobei: That makes sense. Black has maintained/increased his five-stone handicap? 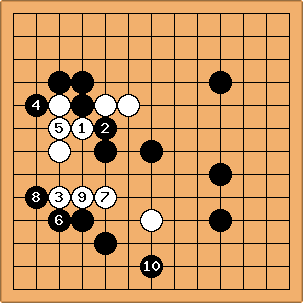 Gorobei: none of these black moves seem either good or bad. White is stressed, but the handicap seems to be slipping away.

Stefan: I respectfully disagree. White has two unsettled groups floating about. Black has points in two corners, and a strong position on the right. Black is leading. His position would have been even better if he had played the keima at the top with 8.

Gorobei: Your analysis is superior. White has played 10 stones and still has no base from which she can work? 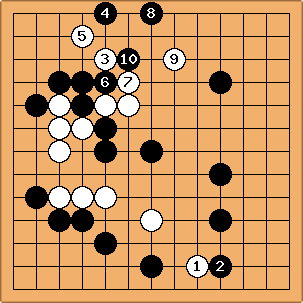 Gorobei: Black 8 seems a very bad move? What does it achieve? Black 10 just seems to compound the problem?

Stefan: Black 4 was an earlier bad move. Playing at 5, protecting the corner, would have been a better idea. Black 8 and 10 don't seem to help a lot indeed. White is beginning to get settled at the top, and as a result Black also starts to have a problem in the top left corner.

Gorobei: I see. Viking4 seems to see the problems in the top left, but the solution seems beyond his event horizon. Playing at 5 would make sense from a "shape" point of view, but perhaps this is not a concept he uses? 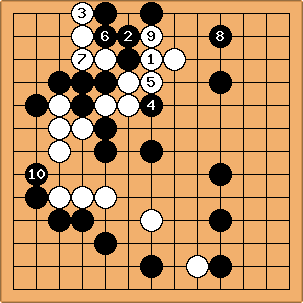 Gorobei: Black 6 seems utterly useless? Black 10 seems to imply that the Viking4 sees the risks in the left hand side...

Stefan: Yes, that's a nonsense move. Black 4 at 7 would have lead to an interesting continuation, but I'm not sure how confident Viking4 is in ko fights :-).

Gorobei: After a little research, my impression is that Viking4 has no understanding of ko fights at all. Interesting! Another thought: Black 24 and 36 are clearly bad: when Viking4 is confused as to what to do, does he bias himself towards the upper left? I.e. a top-to-bottom, left-to-right move generation process means up gets more analysis? I'll look at more of his games to explore this.

Stefan: Until now I intuitively assumed a program's calculation time was uniform across the board. The concept that some areas may get more attention that others is quite fascinating. You then may have more chances of pulling off something impossible in certain zones. Intrigueing... Would it work with humans as well? :-) 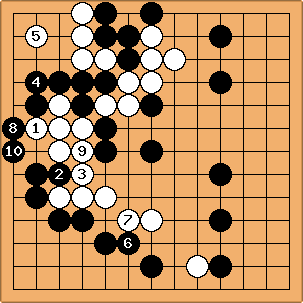 Gorobei: all these moves seem decent.

Stefan: Black 4 should cut at 9, to separate the white group in the center. White would have good chances if she played 5 at 9: Black can't live in the corner and White has to try and win the race to capture if she wants to win the game. Allowing Black to connect with 8 and 10 swings the game in an absolutely enormous way. White is now separated without eyes anyway, and on top Black got the corner back.

Gorobei: Ah, I see now how 9 is a critical play. How does Black now have the corner (I assume the upper left) back? Doesn't white have most of it because she can kill the upper middle group and link up with 5?

Stefan: What I mean is: the black stones there don't die anymore, as they are now connected to another black group. In other words: I compare to the situation where these stones were captured by White. Black doesn't get any territory from the top left, though. White is indeed alive there too, through the capture of the black group. In terms of territory, the corner is now largely a neutral zone. 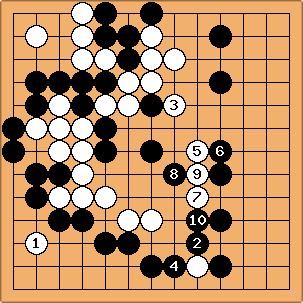 Gorobei: but why this mess? Are we done now? Black 52 and 54 seem to be just local maxima: is Viking4 unaware of the threats to the left side and middle? It looks as if some "I'm safe with n liberties" is being used here.

Stefan: Agree for 52 and 54. Also, the program may not have a good concept of moving from the "what is safe?" to the "what is biggest?" phase of the game, which is typically considered the transition from middle game to end game. 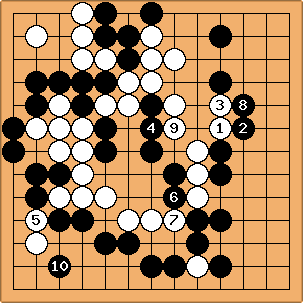 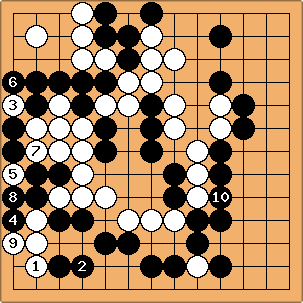