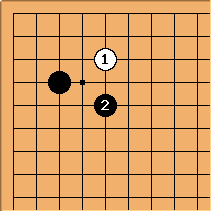 Alex: This move is not joseki, but seen quite often in amateur play, especially at the 10-20 kyu level. It seems intuitive to beginners that it attacks

while building influence on the left, but it is not so good. I have no time now, but I'll come back and write a bit about what's wrong with it soon. In the meantime, others should feel free to start up a discussion.

unkx80: See Tricks In Joseki for some discussion on this. 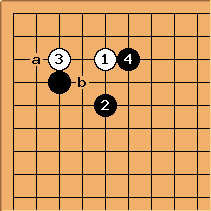 Bill: There seems to be nothing theoretically wrong with

. However, there are tactical problems. After

misplaced. So I am wondering about

. Things are complicated, but at least it is consistent. ;-) 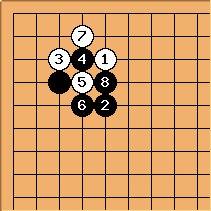 Bill: Hmmm. How about

isn't this fairly even?

has to offer that a plain

doesn't have? In my opinion

has little or no constructive advantage for black, but does help white. 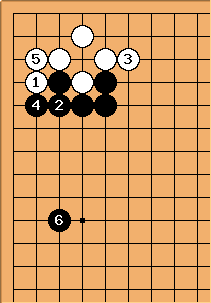 Bill: But then after

Black has nothing better than

maybe White has a slight advantage. nachtrabe: If

were already in place before playing the knight's move, and this sequence were followed given B sente at the end instead of having to play

, would it be roughly even in your estimation? 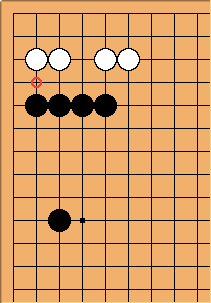 Bill: Doing a rough tewari, and keeping in mind that White has a stone at

, which adds a couple of points in favor of White, and considering that Black has an extra stone, this looks pretty equitable to me. 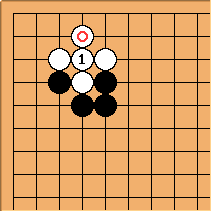 stone, while inefficient, is a definite plus value, not to mention Black's captured stone.

Quite sure. This line is discussed in Tricks in Joseki.