The 3-4 point low approach, diagonal is a classic response to the low approach. It is also known as "Shusaku's diagonal". This move is steady and prevents White from pressing at the 5-4 point. Previously, it was perceived as a slow move in the mid 21st Century, since there is no urgent need for White to respond, but strong AI programs have caused a resurgence in its popularity.

White's main options are to (A) tenuki or (B) develop the top side. Traditionally, it was also possible to pincer and develop the left side, but this has fallen out of use.

Moves are listed by frequency in professional games[1], which is sensitive to whole-board position. Bolded moves are currently considered joseki moves based on professional usage in games after 2018. 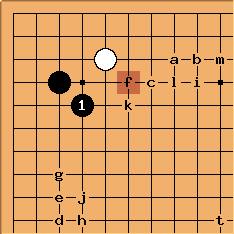 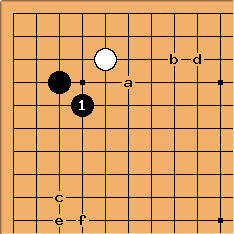 In Fuseki Revolution (2021), Shibano Toramaru discusses the disappearance of the three-space extension ever since the AI revolution[4].

Traditionally, the two-space extension was felt felt to be somewhat cramped if White kicks at y and approaches at

(Diagram 1). To mitigate this, it was popularly believed that White should play a three-space extension to avoid becoming overconcentrated. If White approaches at

However, strong AI programs have a different perspective. Modern go emphasizes sente and fast pace. The two-space extension is good because White can and should tenuki in response to

, in order to take a large point (Diagram 1). White's group is strong and Black cannot do anything that threatens the vitality of this group in one move. While the

extension is a big move, it should be gote.

We can compare this with the three-space extension, where the

approach is much more severe given the defect at x. White must respond locally, and the result is that Black obtained the large

point in sente (Diagram 2). The consequence of this is that Black is able to take the next large point with

, which puts Black slightly ahead.

The concept of taking sente is critical for understanding the purpose of playing the two-space extension. In Diagram 1, responding locally to the

approach is one of White's worst options. The slide at h is especially dubious, and it is heavily criticized traditional joseki dictionary[3] because Black clearly obtains a better result once Black presses down with i. This sentiment is still true after the AI Revolution, and Shibano Toramaru reiterates this criticism in 2021. He also calls the

Press or pincer after tenuki?

Historically, the knight's move press was the most common move after tenuki, but it has declined dramatically in popularity ever since the AI Revolution. In the book Joseki Revolution?, Shibano Toramaru explains that

is a move that primarily develops a moyo and allows Black to acquire solid territory, which is an unfashionable style of play that professionals are less inclined to pursue in recent years. In an example similar to Diagram 2, Shibano argues that the two-space pincer is often similarly good at developing a moyo. If Black tries to move out the

stone, White will naturally enclose the top side.

Shibano's second point is that Black can tenuki in response to the small knight press (Diagram 1). This is in contrast with traditional thinking, whereby Black rarely chooses to tenuki after the knight's press (~15%)[1]. If Black responds normally at a, White has many forcing moves they can use to develop a menacing wall in sente. Therefore, Black can use this opportunity to disrupt White's moyo-centric plan, counting on the fact that is slow for White to capture the

Despite the reduced popularity of the small knight press after the AI revolution, it is important to note that it is often still a very good move. There are many board positions and circumstances where the press is the top choice of strong AI programs. Han Sangcho vs. Cho Hanseung (2022) (Diagram 1) is an example where

is the best move and the two-space pincer at w could be considered a strategic mistake. In this situation, the pincer at w is unreasonable because White will have another weak group to handle once Black moves out the

in the upper left corner is under attack and Black is very strong on the left side. The resulting fight is likely to become quite favorable for Black.

To describe it in simple terms, perhaps there isn't a very compelling reason for White to pincer when Black's left side is strong.

A second major consideration for choosing between the press and pincer is the efficiency of Black's stones if White chooses to tenuki.

Traditionally, one reason why the two-space pincer was less popular was because covering with

stone is provisionally captured, it can (A) come back to life if the outside becomes thin, (B) result in a cut and fight, or (C) give White many free forcing moves on the outside. It was believed that that Black would rather capture cleanly with

after the knight's move press (Diagram 2), which takes cares of the aji and future problems.

Historically, sometimes Black would opt for a loose enclosure (Diagram 3), which allows White to live inside but eliminates the problem with bad aji.

Shibano Toramaru writes that two changes in thinking have occurred thanks to AI. The first is that it is slow for Black to capture cleanly with

after the knight's press (Diagram 2), and strong AI programs prefer a loose capture with x or y. The second innovation is the small knight enclosure (Diagram 4), which makes it more challenging for the

stone to live, yet also gives Black excellent shape on the outside. Shibano praises this move and cites it as one of the reasons why he is more inclined to play the pincer in recent years.

When to play the knight's move extension? 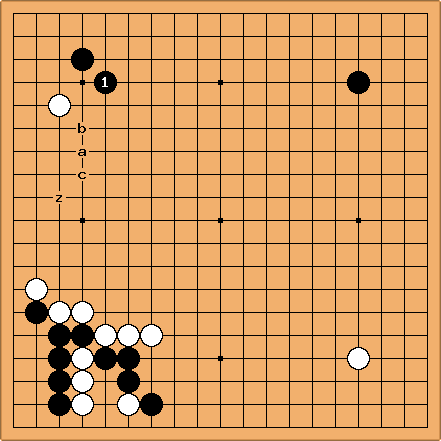 When White has significant potential towards the left side, White can play an extension on the fourth line to emphasize development. The typical extensions on the third line are defensive and easily pressed down, so they are not particularly good moves for expanding large moyos or frameworks.

The knight's move extension is an especially solid option, and White has no need to fear the approach at z because White is extremely thick in the area. Conventionally, z is thought to be an overplay when Black lacks regional support.

Interestingly, AI considers the parallel diagonal at b to be a reasonable move in this board position.

The two-space high extension at c is also an option, but players should note that the shape is thin and has more weaknesses compared to other similar moves.

When to re-approach from the opposite side? 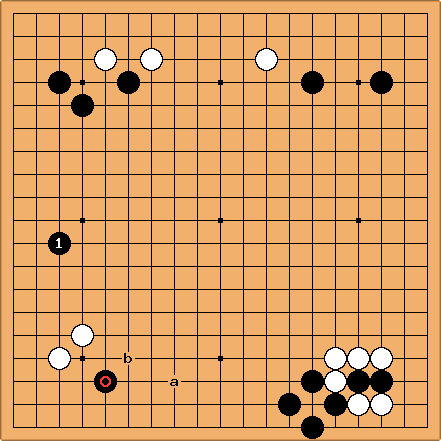 When to play the three-space pincer after tenuki?

White's low approach and Black's diagonal answer were a key feature of the nineteenth-century Shusaku fuseki. With the advent of komi go a pincer became the common answer instead of the diagonal, because it was considered faster for Black and hence a better way to overcome komi. Recently, the diagonal came into fashion again for both sides.