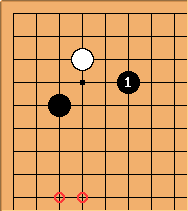 in the diagram, is a famous 3-5 point pattern known as the "joseki of hundreds of variations" (大斜百変) and is commonly regarded as one of the most difficult joseki. Even professionals sometimes make mistakes in this joseki; it is the source of numerous hamete, and new variations are found on regular basis. 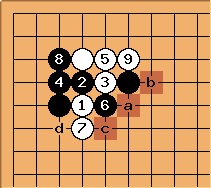 is the standard variation of the taisha. According to Ishida, Black can now choose between a, b, c and d. Each of these, in turn, can lead to 5 or 6 other variations, and so on...

(Incidentally, there are no pro games with d.)

The pages referenced above discuss the taisha when it arises in 3-5 point joseki. Note also, however, that the taisha can arise in 3-4 point joseki as well. In that case,

can follow a white three-space pincer at one of the circled points. See the following pages for further discussion of pincer variations.

Some implications and musings

johnf "the Taisha is still seldom played" is a strange thing to say when the GoGoD database already has 8 examples from last month (August 2015) alone. And beyond that it has been very popular for many years.

Bob McGuigan: It doesn't need a 5-3 opening for the taisha to be played. It can arise as a response to a three space pincer.

OscarBear?: What is the comparative popularity of the various large scale joseki? Is Taisha less popular than the Avalanche or the Magic Sword?