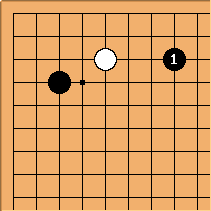 This is a classical pincer that is not so often played now. There are a number of quite obscure variations. 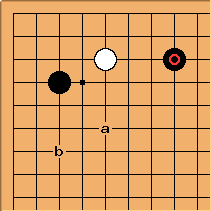 White's usual ideas are the jump to a, the counter-pincer at b, and tenuki (3-4 point low approach two-space low pincer, tenuki). 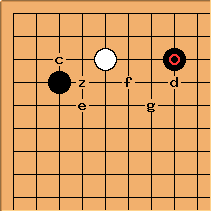 at z see BQM 250). The one-point jump out probably isn't joseki here There are further lines (for example, in game 2 of the first ever Kisei match Hashimoto Utaro tried one, but got a bad result).

The variation where White plays e and Black cuts through is or ought to be notorious for its difficulty (little recent pro game evidence to go on, meaning it may have unexplored joseki status); one joseki book gives a result which is seki, contradicting the go song:

(To the tune of 'There's no business like show business'.)

tapir: I wonder for how long this page remained unedited. The shoulder hit on black, cut variations (well at least those I know a bit) in the far high and near low pincer both end with the pincer stone damaged. The far low pincer stone looks much nicer placed in any of those variations. And there are not much games for it, I guess. Can anyone knowledgeable comment some more?

guppyfry/honus: I want to echo tapir's above comment from 2010 to say that this page could use updating on the shoulder hit by white ("e" in the above diagram) This seems like it has gained popularity and been explored more by the AI?