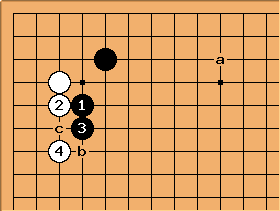 aims to push White on the low side while creating a wall. After

takes some territory on the left side, Black can play in the vicinity of a to build up a framework or continue at b or c to start a pushing battle.

There are some variations possible here. Black can jump with

[1]. White has an option of not jumping with

Instead of 2, white can play also at 3-4. Its move proposed by AI(i have never seen it played by pros before AI revolution).It probably needs ladder. Instead of 4, white can also play one line lower (keima). AI like it better than usual move in many cases. 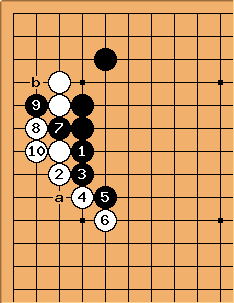 in the previous diagram is a joseki. However, Black can also choose to continue to push at

to continue building the wall. When

makes a double hane, Black takes the opportunity to take profit at

in sente, using the weakness at a, which is why

cannot be played at b.

in this diagram, black can play

to start a complicated fight; see below 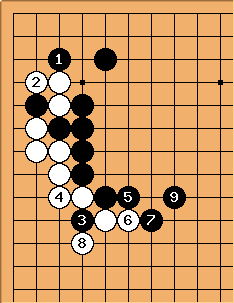 is also sente, then Black ataris at

, Black has created a very big wall. A noteworthy difference from the previous joseki is that it is White's turn now. 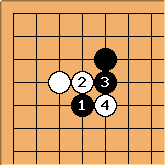 If White does not like to be kept on the third line, then

might want to cut through. See press for more discussions on this topic. 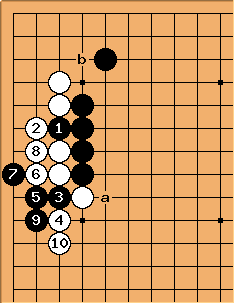 here start a complicated fight. This is just one possible continuation; white could also play

at a or b instead.

Black can us his stones on the edge as sacrifice (starting with a). This is seen in games of Kato Masao and Cho Hunhyun. 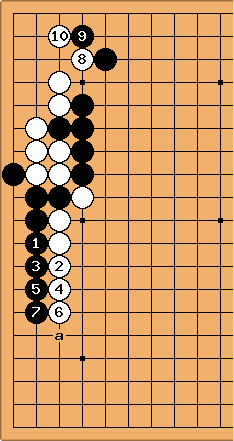 , white must live in the corner.

at a, followed by

, starts a capturing race which black wins. (There are lots of variations to explore, with some good tesuji problems!) 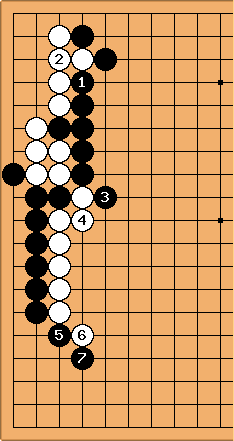 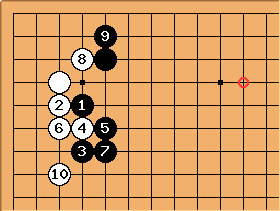 Black 11 is expected to extend, probably to the circled point.

There are some other choices for