The Toramaru-style fuseki is a fuseki opening characterized by two opposing 3-4 points and a move underneath the side star point.

Shibano Toramaru (9p) called it the "Toramaru-style recommended opening" in his book Fuseki Revolution (2021), but it is neither attributable to him nor played by him particularly often. This fuseki was popular during the mid-2000's. Professionals who played this opening frequently include Kong Jie, Takao Shinji, Yuki Satoshi, Weon Seongjin, and Kubo Katsuaki. 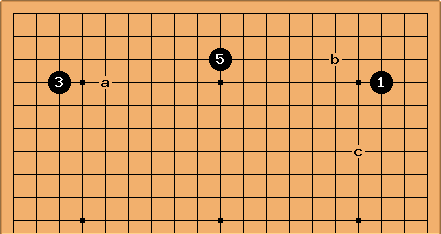 This fuseki appears to have been utilized for force White into a difficult position if they approach at either a or b. It is a fighting fuseki makes it difficult for White to settle with a comfortable base.

Professionals have also used it as a fuseki that pushes White into the complicated small avalanche joseki. In fact, in historical professional games, the most common sequence is the immediate small avalanche. However, it is Black's privilege to prepare and choose the fuseki, so they are better able to prepare before a match.

If White ignores the formation and plays elsewhere, Black is content to enclose the corner around a, as the spacing with the 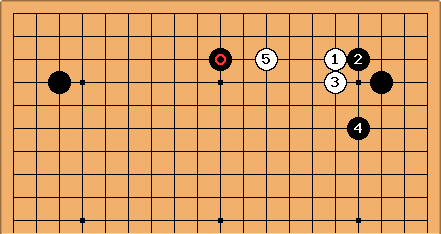 If White plays the low approach with 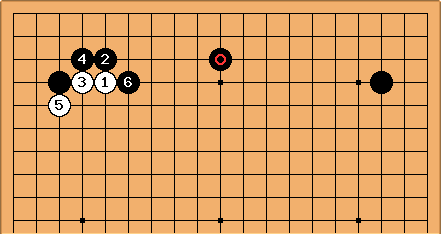 If White plays the high approach with

, it was historically common for Black to play the small avalanche with

. Interestingly, Black would do this even if they lacked the ladder, which is normally unfavorable for Black.

The presence of the

stone likely makes the small avalanche more favorable even when Black lacks the ladder, since it plays a role in the fight. 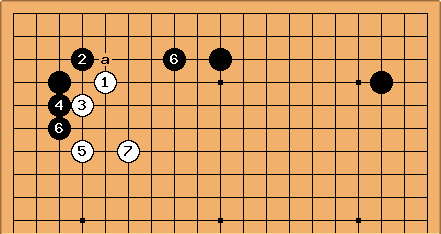 While not especially common in historical professional games, Shibano Toramaru advocated for the diagonal with

. If White descends at a with

, this transposes to the kick joseki, which is unfavorable for White.

Instead, White might try to move out, but they lack a base.