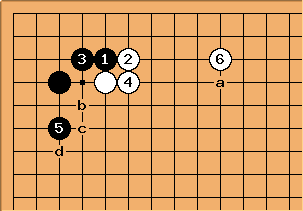 The canonical joseki for the solid connection at

is as shown, with

making a three-space extension from two stones, "completing" the joseki. Here the low extension is shown,

Depending on the left side,

may also be played at b or c, each with its pros and cons. The advantage of

here is that it finishes the position in one move.

at d is also seen (Takahashi Shigeyuki (B) vs. Go Seigen 1936-04-14), but presently it is no longer considered to be joseki. See 3-4 point, high approach, inside contact / discussion about why d is considered to be too wide.

may also be played as a pincer at or around

. See the section on "Black pincer variant" below for more.

Black's alternatives for the extension 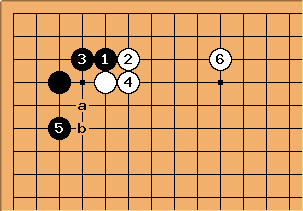 We now discuss the extension of

, and its two variants a and b. 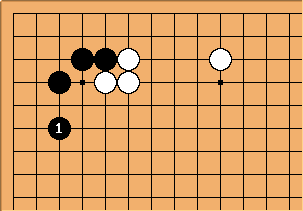 The one-space jump of

finishes the joseki in one move, with no intention of further expansion along the left side. 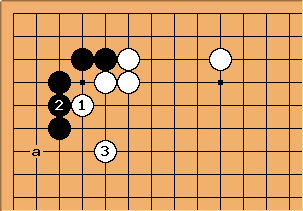 As Black's position is low, subsequently

can expand the top side. Incidentally, Leela Zero suggests

may be more efficient at a. 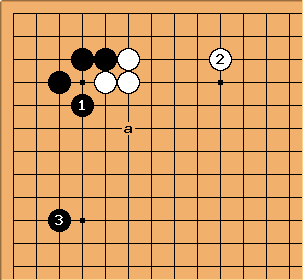 The diagonal move at

. Later, Black can play at a for further expansion. 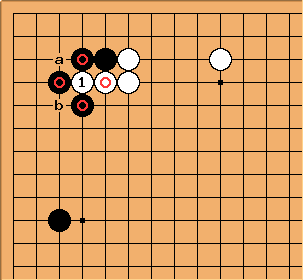 stones form diagonals that are compromised by

is a common probing move, which aims at Black's cutting points at a and b. As Black can only defend only one of them, White can then decide a suitable follow-up. Note that the timing of

and its follow-up moves is important for achieving the best effect. 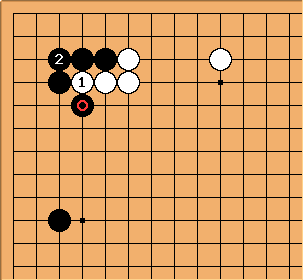 If Black defends on the 3-3 point, then the

exchange allows White to profit in sente, as 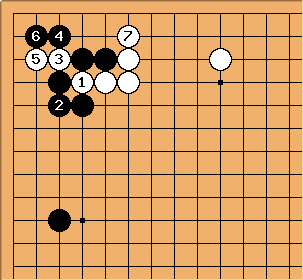 defends the outside cutting point, then

obtains endgame profit at the top side. 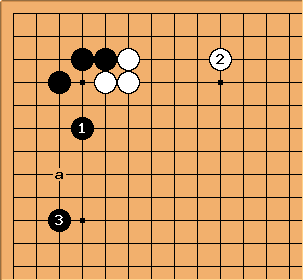 The knight's move of

also aims at further expansion near

, a move at White a will expose the weakness of the knight's move. 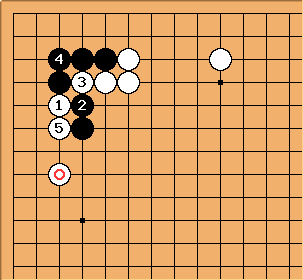 strikes at the waist and cuts Black off. 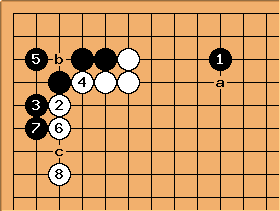 Black can play at

or a if White's extension frustrates Black plans at the top. (This is bad locally, but may be playable overall.) White's compensation is to fence in Black and create substantial thickness. For both players, knowing how to handle White's thickness is key to playing this variation.

: the connection can also be at b.

is a little better than c. (Compare with getting ahead with a one-point jump.)

If Black plays atari at 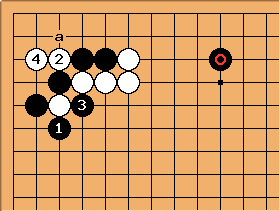 at a would be soft. The

stone loses half its purpose. 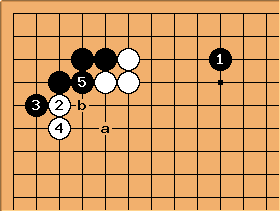 here is also soft. Black plays a good empty triangle and White has either a cutting point (after White a) or bad shape (after White b). 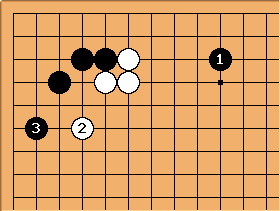 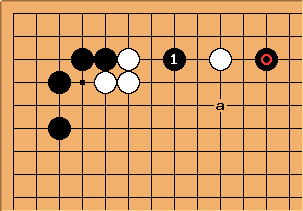 In the opening or early middle game, it may be slow for White to defend at a if Black checks? at

. This means Black can invade at 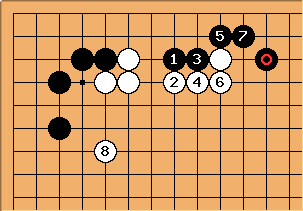 One possible continuation is that Black connects back with

, while White has a wall.

provides breathing room for the resulting influence in the center. Given that White has ignored

to take a big point elsewhere, the loss of territory is acceptable. 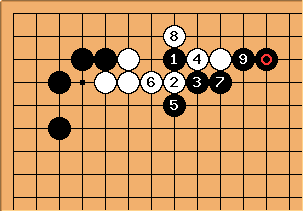 here, Black can force White into bad shape at

, and take influence with 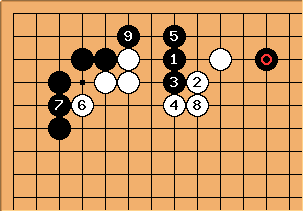 White can also resist with

, Black needs to connect at

. White has influence and sente but the stones are now without a base. 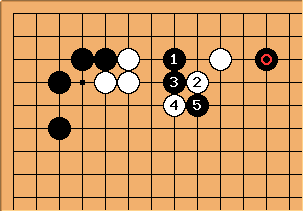 Black can also fight with

, leading to a whole board fight. 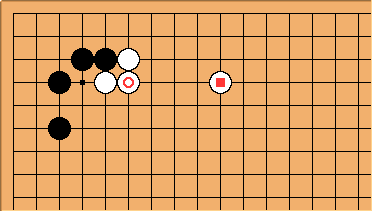 After the solid connection

and the high extension

, Black can invade even without support. 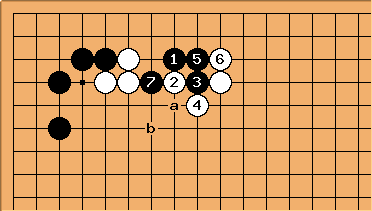 White's choices depend on the rest of the board. After

, it looks natural to play a but Leela Zero suggests that b is superior. 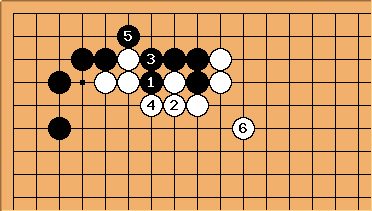 in sente. White needs to cover the cutting point with 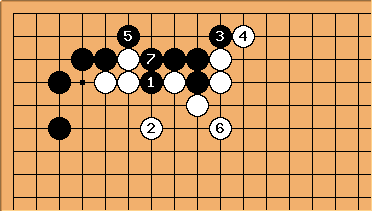 connects, White has sente, which is the major advantage over the previous diagram. Leela Zero gives this a 10% difference. 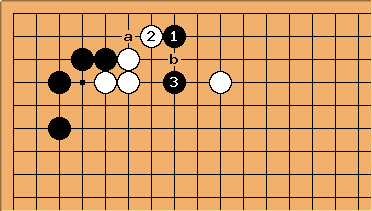 is very effective. It threatens to link up at a. If White prevents this with

, the fight can become very difficult for White after

at b. After that, Black can treat

as kikashi if he likes. 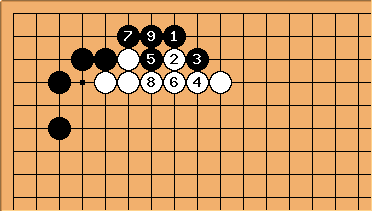 So White will, in absence of supporting stones, likely choose to take influence with 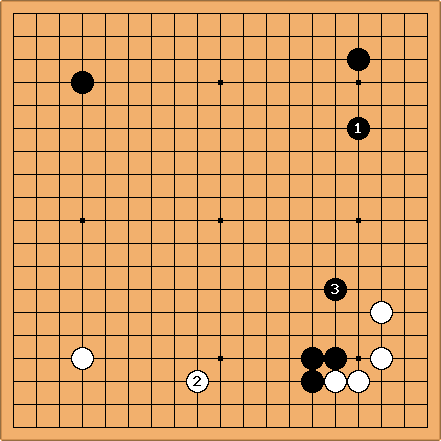 One novel understanding coming from the AI revolution is that the solid connection doesn't need an urgent extension. It has more thickness than previously thought. In this early board position for example, Black may choose to enclose the upper right. If

then takes away Black's base,

defends and Black doesn't seem to be off badly. 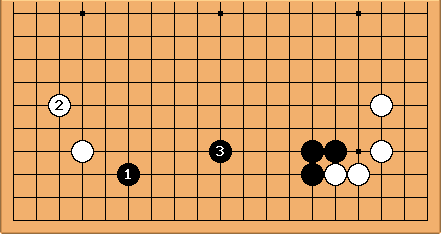 ... Black can develop faster this way. 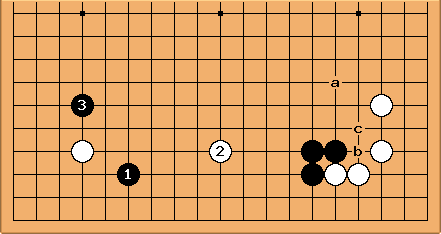 White can resist with this pincer, leading to a double approach pattern in the corner. Again, taking away Black's base doesn't seem as troublesome as previously thought, due to a and the forcing moves of b or c available.