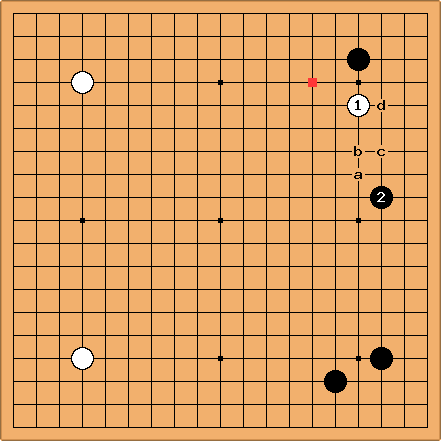 Dieter: why is this pincer never seen in pro play and what is the correct refutation? I have some ideas but I'm keen to know yours first.

very much. I think White would respond at the point marked with a square. See Missing Pincer.

Dave: Recognized pincers are a, b, c. The pincers a, b attack

, while c has a special meaning in that it threatens the connection underneath at d.

does none of these things. It is true that it starts to form an area of influence on the right side, but it does so without threatening the White stone. In other words it is a slack play - good enough for us amateurs but not seen in professional play? :-)

Confuseki: I personally feel that a loose pincer in this opening doesn't actually seem to do anything definite. If I was black, I would be mindful of my corner enclosure in the bottom right. The direction is just begging for a black stone on the right side star point (or just under). This stone would be way too far as a pincer threat, but the loose pincer isn't really an immidiate threat either. QUESTION: What is this stone trying to do? Is black going to try and extend with it and try to create moyo? It's just too far from the lower right corner stones for that... White can treat '1' lightly and pincer Black's pincer! (And thus minimizing Black's extension from those corner stones) 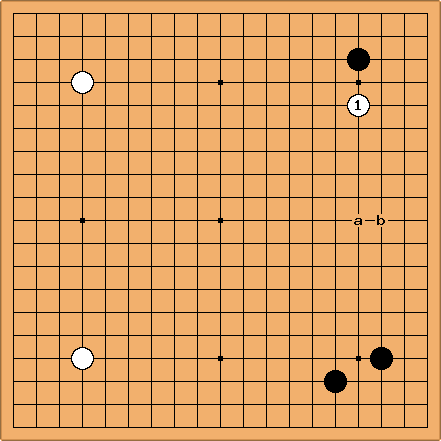 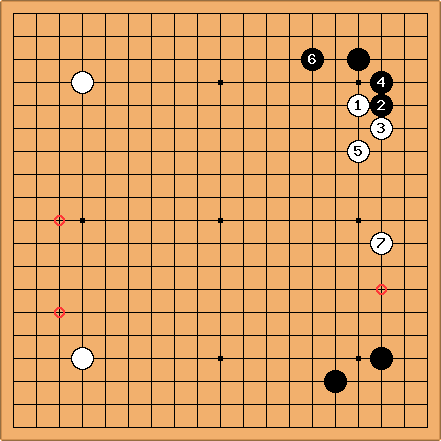 This pattern was popular in Japanese pro go 40 years ago or so. Black has taken territory in two corners. The low strong black stones in the upper right and lower left inhibit development on the upper and lower sides. Pro games on gobase show all the points marked with a circle as possible next moves for Black.