Assuming White does not have a ladder breaker, is this joseki?

I have tried this twice on KGS against a 14k and a 15k. In both cases White chose the quiet approach. 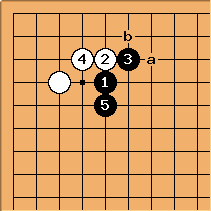 Looks like White at a can exploit this quite nicely.

kmr - surpisingly, AI does not like this nicely looking tesuji at "a" and like much more "b". Rest of play depends on what is on board, but if black extend at "a", white follow suit, and black is in not good position. He can extend one more time (white will then most probably tenuki), or tenuki himself, giving white option to either hane at head of 2 stones, or sth more severe like eye-stealing tesuji (but it depends on whole board situation very much). If corners are empty, AI judges "5" as about -25% of WR, and indeed move looks bad. It doesnt give black good shape and does not prevent cut definitely. 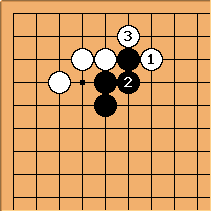 , then the result after

is definitely good for White. 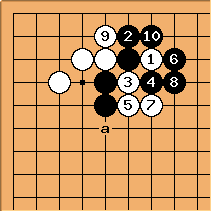 This looks like another failure for Black. White 11 can capture two black stones at a. 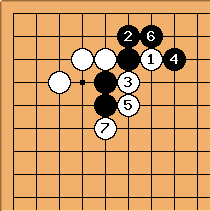 This is better for Black, but still favourable for White. 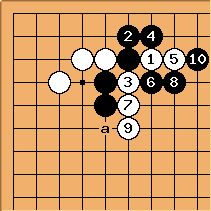 seems to be the strongest move of all. But the exchange looks good for White.

I'm sure I missed something, but that's about it for now. 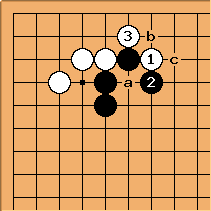 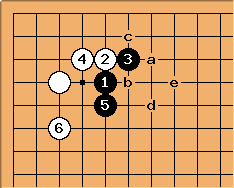 unkx80's ideas appear correct, but White also could hardly go wrong with the quiet move at

. Either Black adds a stone in this corner, after which he has done in four moves what Would normally have been done in three, or Black extends along the side (or plays tenuki if he already has a stone there), and White has much more aji here (a or b, or if nothing else works c) than if Black had played at b with 5.

As said, this is not to criticize unkx80's analysis. Rather, I would like to point out that often the best way to exploit a weakness in opponent's position is to do nothing - the opponent will then have to keep worrying about it until either he spends a full move repairing it or the time has come where you do see what to do with it. -- Andre Engels

unkx80: I never said that this is the only way for White to play. In fact, if you ask me the same question again some other time, I might suggest other moves. =)

When KGS players around 15k did this, they later attacked from a distance, allowing me to settle in good shape with d or e. - Migeru 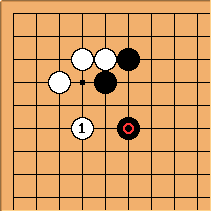 Charles Matthews The lighter play of this marked black stone comes up from time to time in pro games. White 1 is the most common answer.

Migeru: This is better for Black, but I still like White's position. Is this the best Black can do against White's attachment?

Andrew Walkingshaw (NB: I'm 4 kyu, so take this with suitable seasoning): What's so wrong with the classic lines? If anything, the standard solid attachment is considered a little better for Black, given the greater outside influence; the hanging attachment is also OK.

Andre Engels: One situation where this move is often chosen, is when there is already a white stone somewhere along the upper side. Black has no opportunity to make territory in that case, and instead runs away lightly. A second possibility might be that Black is trying to build a framework in the center. As for your question about what is wrong with the classic lines: There's nothing wrong with them, but joseki are not panacea, and special situations often require special joseki.

Andrew W: I was more referring to Migeru's complaint that the light move might be "the best Black could do"; it seems to me that in most cases the normal lines are fine for Black.

Sorry, my ignorance of joseki is encyclopedic. I could still say in my defence that you are supposed to understand why the standard line is joseki before you learn it and apply it. - Migeru

This in no way invalidates any of the excellent things you (Andre) say, of course... 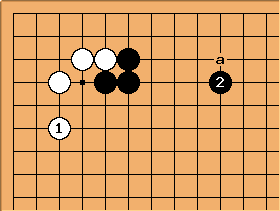 Here, a makes more sense if you want to settle locally, but

is good if you have back-up in the upper-right-hand corner (to turn the side into a framework). 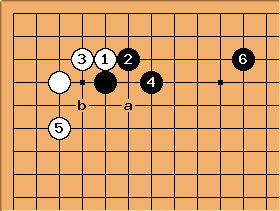 Here, Black has taken more immediate territory, but there's also more aji left: a peep at a, for example. (White can play

at a, if Black connects, White continues with b; this is normal when she has the lower left, so she can then play the 10-4 point in between, making a large side framework. The 6-3 point is too low to relate well with 10-4.)

Anyway, I'm sure that somewhere on SL (someone add a link please!) goes into this in more detail than I can at the moment.

I think someone could go to komoku and build from there. - Migeru

Well, try at joseki repertoire for mid-kyu players, or enclosure opening. Of course it is in a sense ridiculous to have more on the nadare than on the tsukehiki line; but the joseki pages here are subject to organic growth where people are interested. No one has yet become excited or even practical about putting a joseki dictionary here. Charles Matthews

I love the organic nature of the joseki pages here. - Migeru
My main conclusion from looking at MappingSenseiSLibrary is that joseki pages tend to be poorly integrated with other discussions. You could say that is a basic pedagogic problem, and that we try to solve it here by a discursive method (not so deliberately, maybe). Something good can come of the combination hyperlink to other pages/comment, footnote and gloss within pages. Something scholastic and badly referenced, too, of course. Charles