The 3-4 point high approach, attach-drawback joseki (Tsuke-Hiki) is one of the most popular 3-4 point joseki, and it one of the first joseki learned by beginners. Drawing back (hiki) is solid shape and secures the corner territory for Black. Meanwhile, White has a cutting point should be defended.

Typically, White will defend the cutting point with either (A) solid connection or (B) hanging connection. In rare instances, it is also possible for White to utilize (C) a sabaki strategy (light play) to move into the center. Professionals will also sometimes (D) tenuki to play a probe prior to choosing which connection, but this is an advanced tactic with its own risks. 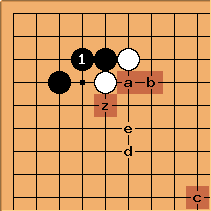 Tenuki is played around 13% of the time, either as a probe or to take another large point. It is surprisingly common in professional play, although it should be considered an advanced tactic that is extremely difficult for amateurs to judge.

Historically, tenuki was considered playable during the opening because cutting with

is gote, and Black can get a second move elsewhere on the board. This was considered an even result, and often times professionals would not cut immediately at

out fear of taking gote.

However, strong AI programs have a different opinion, and cutting at

is considered slightly better for White even if it is gote.[2] For this reason, probing during the attach-drawback joseki has dropped in popularity in recent years, since strong AI programs will usually recommend immediately cutting at

However, the valuation of this board position is subtle, and in many circumstances there is less than one point difference in winning rate. For this reason, these tenuki variations can still be considered "even" games, and some professionals continue to tenuki even in the AI era. 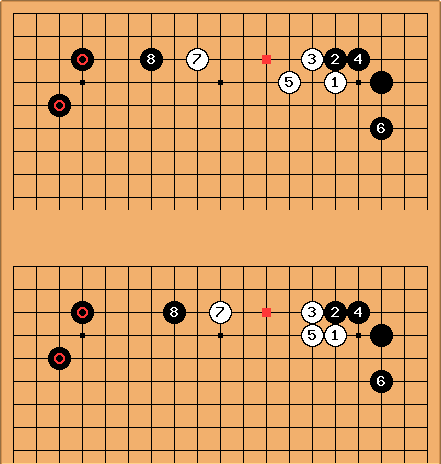 Prior to the AI revolution, the main consideration for choosing between the solid and hanging connection was the spacing of the

stone. White would play the the hanging connection whenever they wanted to extend one space further.

Isn't a further extension always better and more efficient? Actually, this is often not the case, and farther extensions typically come with more weaknesses. On an empty board, it is usually better to play the solid connection since it is stronger and more resilient. However, the considerations can change depending on the situation in the upper left corner.

The one-space counter-approach is typically a key point for both the solid connection and hanging connection joseki, since the

) inside of White's base. Usually, Black will want to play a one-space counter-approach at some point in the opening (but not necessarily immediately).

when White plays the hanging connection, which feels a little cramped. (See: Extending from an enclosure)

Most professionals felt that White is better in the first diagram, and historically the hanging connection was played more often than the solid connection (~61% vs ~14% frequency)[1] in this particular board position.

However, the AI revolution has changed the perspective of many professionals. The hanging connection is not played as often nowadays because Black can tenuki after the tiger mouth at

. White cannot be completely sure that that Black will play the extension at

, which makes it difficult for White to predict the outcome of this fuseki.

Probing during the attach-drawback joseki

See main article: Probing during the attach and draw back joseki

In the late 21st century and up until the AI revolution, probing during the attach-drawback joseki was stylish. White would often tenuki after

to approach the top-right corner, and once Black responded, White would decide whether to play the solid connection or hanging connection.

If Black responded with the knight's move at

, White would opt to play the hanging connection with the extension at

. This was considered good for White because

would be better placed at b, and its current positioning is too far away to activate aji inside of White's position.

There are many different kinds of probes, but this illustrates the general principle of this popular strategy.

at a instead of responding to White's tenuki.

When to play for the center? 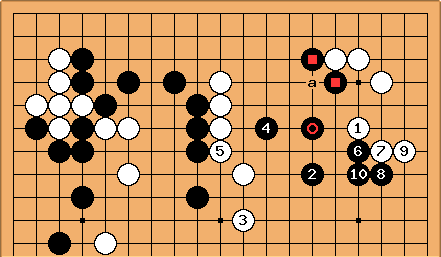 Black often chooses to play for the center when the side is blocked by hostile stones. In this situation, the approach functions as a reduction and Black seeks to escape as quickly as possible.

Kim Sujun vs. Yamada Kimio (2010) illustrates this concept, and we can see that that the upper right quadrant of the board is White's sphere of influence. White has a large wall in the area that threatens to enclose anything that attempts to invade, and it blocks Black's natural extension. Black plays the small knight jump (

) are light and Black is willing to sacrifice them. In fact, the ladder at a works for White. However, cutting at a is a bad move because Black will be able to use many forcing moves to make shape (sabaki). Instead, White chases Black's weak group with

, hoping to enclose Black on a large scale.

After some forcing exchanges, Black manages to make shape for their group and escapes from the gauntlet. Meanwhile, White's moyo is destroyed and Black is happy to have carried out a successful reduction. 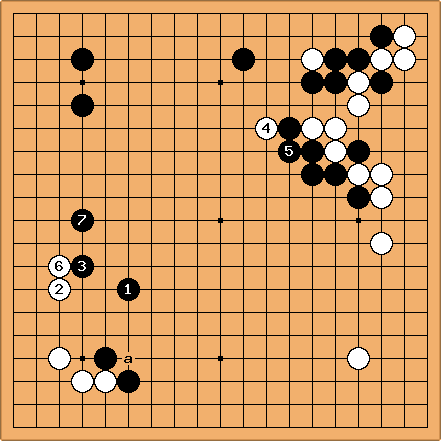 The cosmic style of go has fallen in popularity in recent years ever since the AI revolution, but it can be a valid and effective strategy at the amateur level of play.

Historically, the large knight jump was often played by professionals in the opening when they wished to play a moyo-centric game. Often, it would even be played on an empty board on the first corner approach, which speaks to the popularity of Takemiya Masaki's style among many other professionals who attempted to imitate him.

We can see that Black has accumulated a large number of stones towards the center of the board. Although it doesn't look like much of a moyo at first, Black plays

to move quickly to the center. After several exchanges,

appears to create a fairly intimidating moyo in the center of board, and White would definitely lose if they are unable to invade that space.

As before, cutting at a is a terrible move. While it is possible for White to capture one stone, Black will gain very thick influence on the outside, which will contribute even more to Black's whole-board strategy. When Black is playing a large moyo strategy like this, White must seek much larger moves or else they will lose.

To a beginner, Black's moyo may look scary, but strong players and AI programs generally have an easy time invading these frameworks. For this reason, the cosmic style has largely disappeared in recent years. Despite this, moyo-oriented strategies like the sanrensei fuseki are still highly effective at the amateur level of play.

is a very interesting move that was well-regarded by professionals until recently.

Perhaps you might be able to find a good situation to experiment and use it?