In Non-Joseki Exercise 1 we were asked to go over the following position: 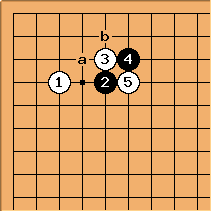 is usually played at a (with White b being known as a Kitani's Joseki). Now White plays at 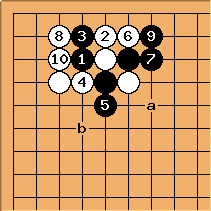 After attempting several different paths, I came up with this sequence. Black gives atari from above with

, then discards that stone, adding a second sacrifice stone at

. White is forced to give atari at

to avoid being captured, then after

in sente. After White 10, Black builds thickness with a; if Black is already thick in the area, he might prefer Black b instead. - Andre Engels 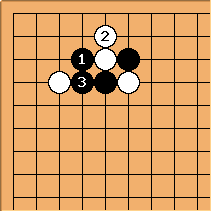 Charles Matthews Rather lazily, I assumed

would be good enough. Surely this isn't pleasant for White - it is a kind of basic instinct sequence.

Hah! And now I find it was played by O Rissei(B) against Rin Kaiho 1988-03-13, in a middle game position. Of course that doesn't say much about the best way on a clear board. 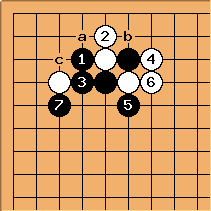 On an otherwise empty board, this looks indeed like a big loss for White. Dieter

, I think Black would do well to exchange Black a for White b; for her sake, White might well try playing White a before giving atari at

. Probably at this point, Black will answer at c. The question then becomes whether

is honte or overconcentrated if the White a - Black c exchange has been played. Andre Engels

DaveSigaty: Playing a first may be too optimistic. Having played

, White may play on the left instead of submitting at b. When Black plays b to capture two stones, White forces to the right of b and then extends along the right side.

unkx80: I suppose dan players have no problem coming out with a solution to this rather simple problem. I was expecting Charles's solution, but Andre's solution is definitely playable.

Andre Engels: If this had come up in a game, I would have played Charles's variation too, but now I had some more time to think it over. Which of the solutions is better depends on the situation - as a rule of thumb I would say that Charles's is better if the left side is more important than the upper one or both are uninteresting; mine is better if the upper side is more important or black is having an eye on the center.

Charles I was wondering how this result compares with the taisha variation at net versus ladder, which ends with a similar net capture to Andre's diagram. In that case (which is sub-joseki, not quite acceptable) the result for the player taking the corner is much better than here, but with one extra play.

Brian: My first thought when I saw this problem was the counter-atari by White at

. If Black extends (at

here), then it has returned to Andre's solution. But if Black captures, what happens next? 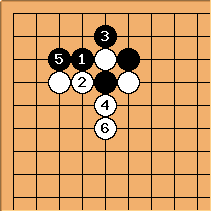 This is what I came up with. White seems a bit weak, but I don't see a way for Black to take advantage of it immediately. What do the stronger players think of this? Comments and corrections, please!

we get a ponnuki, so we expect the result to be favourable to Black.

Charles Note that extending is good.[1] I think

here is probably worse than simply connecting the ko.[2] 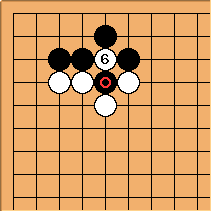 Dieter: I would be inclined to capture the ko instead. But your variation looks playable: see next diagram. However, see further ... 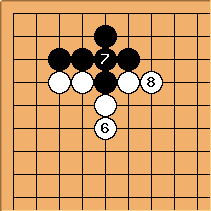 Looks like nice influence for White. If Black resists, however ... 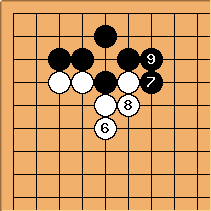 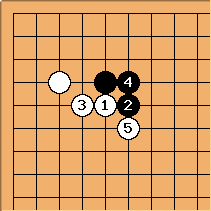 If White wants influence along the left side, she may want to play the outside tsuke to begin with, starting a pushing battle.

Brian: A very telling point that I had failed to consider. This does seem a much simpler solution to developing the left. 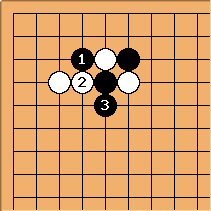 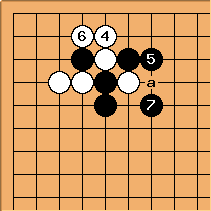 to capture, even if the ladder at a is bad. 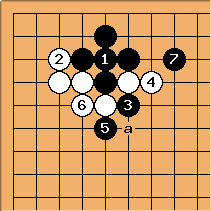 Charles When Black simply connects the ko, White must be careful. It is easy to overplay here. Black can fight hard because of his strong shape, as here.

Brian It seems to me that although White is unable to seriously attack Black up top, she can still develop along the left after white a. While Black is much stronger than I had thought, should be White be unhappy with this situation? 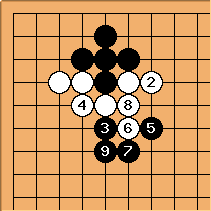 here can lead White into a mess. It is too hard to attack the black group on the upper side.

Brian Yeah, White does not look good in this diagram. Any of the alternates seem preferable to this.