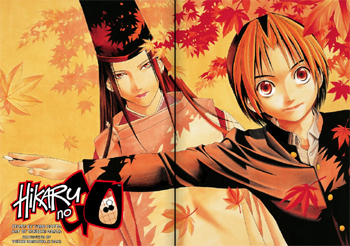 Hikaru no Go (ヒカルの碁, literally The Go of Hikaru or Hikaru's Go) is a manga (a Japanese comic) and an anime (a Japanese cartoon) about a boy (Hikaru Shindo) who discovers the ancient game when he finds an old board in the attic and meets the spirit of a past Go master (Fujiwara-no-Sai).

Thanks to the comic, Go has come into fashion again with the Japanese youth. Published by the

Shueisha in Japan, the hilarious storyline is by Yumi Hotta*; the gripping art is by Takeshi Obata; and photogenic pro 5-dan Yukari Umezawa (Umezawa Yukari) gets credited for go technical advice. The series was serialized in Weekly Shonen Jump, a popular Japanese manga magazine. The anime was produced by

Studio Pierrot and it was aired on

The Hikaru no Go manga is published by VIZ Media (

http://www.shonenjump.com), while the entire anime is viewable at

Hulu. In North America Hikaru no Go is also available on the

Effect on Go communities throughout the world

"World Go population probably tripled because of 'Hikaru no Go'", said Joey Hung, USA 8 dan Go instructor. All of Joey's Go School Go students in Fremont, CA, USA have watched the exciting Go anime. Also, at the World Amateur Go Tournament and Beijing Mental Olympics Tournament, many European, South American and Asian players reflected that they have seen a dramatic increase in Go population due to the 'Hikaru no GO' anime.

Where to find it

Other Hikaru no Go-related books

However, this page and other Hikaru no Go pages use given name first, family name last ordering for most of the characters to be consistent with Hikaru no Go manga published in the United States, Canada, France, Italy and Germany. It is hoped that this choice will facilitate the use of Sensei's Library by individuals for whom reading the manga is their first exposure to Go.

The manga uses Western order naming with modern-day individuals and Japanese naming with historical figures. Perhaps the most prominent example of the historical figure naming is Murasaki Shikibu (Asian order) in place of Shikibu Murasaki (Western order). Murasaki Shikibu is the author of the famous Japanese novel The Tale of Genji. Chinese individuals (such as Lee Rinshin) have their names rendered in Asian order in the English-language version of Hikaru no Go (see Chinese name). In the beginning of the English editions Korean individuals (such as Suyong Hong) have their names rendered in Western order but towards the end they are using Asian order (see Korean name).

Names of seiyu (voice actors) and all staff members involved (except for Umezawa Yukari) are also in the Western order.

Towards the end of the English manga, the translators seem to revert to Asian naming order. This change happens somewhat gradually. In Volume 17, Chapter 141, the pairings for the first round of the Meijin Tournament are shown as "Shindo Hikaru (Asian order) Shodan vs. Akira Toya (Western order) 3dan." 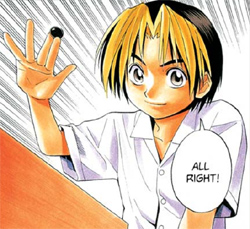 Locations in Hikaru no Go

Hikaru No Go Problems
Sensei's Library has a separate shelf devoted to the study of the various go problems and interesting game positions that appear in the manga.
/Games
Some (if not all) of the game positions that appear in Hikaru are from real games played by professionals. Can you add to the list of identified?
/Errata
errors, mistakes, glitches found in the manga, anime, etc.
/media release information
forgot the names of the chapters? Want to know who sells what?