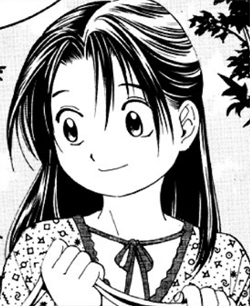 Akari Fujisaki (藤崎 あかり Fujisaki Akari) is a fictional character in the anime and manga series Hikaru no Go.

Akari is the childhood friend of Hikaru Shindo. Originally she is puzzled by Hikaru's odd behavior. She begins to learn Go as well when Hikaru becomes interested and later joins the Haze Middle School Go club, serving as captain of the girls' team. Akari keeps the club together after Hikaru and Yuki Mitani leave the club. Akari has an older sister who attends Haze Middle School in the beginning of Hikaru no Go.

Akari's voice actor (seiyu) in the Japanese version of the anime is Yumi Kakazu. In the English version her voice actor is Chantal Strand.