It is a very long-winded autobiography. Be prepared for reading!
PS: (I use "it" to specify sex-unspecific person)

Loon: Probably rude of me to interrupt here, but it would be way simpler to use the (non-US) English meaning of "they", "them" etc. as non-gender specific singulars. I have no idea why American English doesn't use these.

(Oct)Defeated GNUGo 3.4.X and 3.5.X. Currently I could defeat them in 3-stone handicap game

- I often fear people playing non-standard but bad joseki(?). I intend punish them, but get punished. Huh?!

jantiff: Deviating from joseki does not necessarily incur a drastic loss, so don't try too hard. Careful reading and positional judgement should guide you, rather than joseki scholarship (advice from Kageyama's Lessons). See also MoreThoughtsAboutJoseki.

aLegendWai: A first visitor who leaves message in my homepage :D.
aLegendWai: In fact, the moves I am actually talking about are the moves which "deviate from joseki" & "are considered bad by my instinct". I put (?) beside the joseki indicates I doubt if my instinct is correct.
aLegendWai: In summary, what I actually say is "When I find some bad players playing non-standard but bad corner moves, I intend to punish them hard but get punished. Poor! :("

aLegendWai: Anyway, you made a very true piece of advice. I don't really think joseki is the equivalent to best corner moves for 2 reasons. Pros constantly deviate from joseki moves. The combinations is "really numberless". I don't think it is possible to find the best moves. Many combinations have not been researched (well) too.
aLegendWai: Rather I will treat joseki moves as suggested moves. They are suggestions. They are not definitives!!!

- why do dan play fast & correct? I play slow & wrong. My brain is rusty?! Or my method of finding a correct move "trial & error" is unwise?!
- I'm somewhat rank chameleon in the even game. When the player is weak, I tend to make more blunders. And make a lot of overplays, hoping the player doesn't realise. So I can win more points. Unfortunately when the player realise it, I will suffer quite a lot. Unnecessarily risky & abysmal strategy, right?

How I knew Go

I first met Go in the animation of Hikaru no Go.
I love the leading character (Hikaru) and Sai. Sorry to say, but I am a bit dislike Akira (Hikaru's arch-enemy) because he is sometimes arrogant to Hikaru.

But don't get me wrong ^^. I didn't start playing Go after the animation. I love the animation but it doesn't automatically mean I love Go. I am not interested in Go!!

When and How I learned Go

http://playgo.to/interactive/ when I didn't get anything to do one day. I didn't play to anything afterwards.

On Easter 2004, I visited a HOST family in the UK. There was no internet facilities in their home. At night I got nothing to do except talking to them. They slept quite early.
To kill time, I opened a 9-mini-board game (which had a Go board game too) in my notebook computer and played.
I set the difficulty to the highest (master) and fight with it. "Really tough..." It sometimes caught some stones, I sometimes counter-attacked it - what a tough fight!
I stopped By the way, I was very happy that I can equal the Go master. Hehe... I must be very talented at Go. ^o^ When I play Chinese chess, I can only compete with the beginner (the lowest difficulty). What a shame%%%

A spark to Go

I talked to my friend on the phone. It (I use "it" to specify unknown-sex person) said it played against the Go program as well.
It: The Go program is trash. I don't like to play with it anymore.
Me: O-o Why?
It: It only plays numberless unreasonable moves. It doesn't know how to play. It is just a super-newbie(30k).
Me: Really? I had a tough fight with it!!
It: I bet
Me: Did you set it as Go master?
It: Definitely
Me: hmm...
It: This Go computer is really non-sense
Me: I think it is you who are really non-sense
It: You fool!
Me: No, it's you who fool
It: When you come back, I will show you why you're a fool

I am a dead duck

(In June 2004) I played my first game with my friend. I forget whether it was an even or handicap game. But I lost poorly.

is going to die. W is so silly. 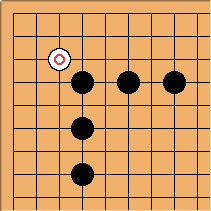 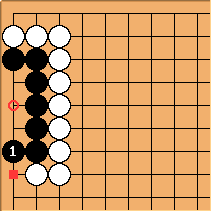 , I can live. W cannot play inside because it is suicide.

Uberdude: Yes he can!, playing there kills.
Phelan: Uberdude, you apparently missed the point. There is a reason these diagrams are titled silly mistakes.

"I have to be strong. I have to defeat my friend (It is the strongest among the friends I know). I can't let it laugh out loud in the game."

I started to study Go in summer. All of my holidays are almost spent on Go. I read a lot and a lot.
I am like Hikaru. My friend (arch-enemy) is like Akira. It is also rude and arrogant to me. I has to chase after it, and has to run before it.
My friend borrowed a Go book from its school library. It gave the book to me. That book was my first Sai. It changed my life.
That book changed my life:

(Early Sep) After my revival, I played 2 games with my friend. The first game:
A practice even game (Undos are allowed for silly mistakes). I tried to play in a way what my first Sai said. Unfortunately, my friend still won by about 5 points.
Before this game, I should be around 4 stones behind my friend. I asked it how strong I was. It: Wow. You get stronger.
Me: So how many stones I am behind you now
It: Just 1 stone or less stronger.
Me: But you just won by 5 points
It: Hey. Don't you remember the undos?
Me: Maybe 2/3 stones stronger
It: No, you can't.
Me: umm... (I don't think so)

The second game:
A real even game (Undos are disallowed!). Initially I lagged a bit behind my friend. But I destroyed its whole upper left corner in the end. It turned out to be me who won by 21 exactly.

(Oct 10) Now I can even defeat my friend in a 3-stone handicap game. Unlike Hikaru, he needs to spend a few years and still he cannot catch up with Akira. I've just spent about 2-3 months to get over him.
My arch-enemy is all over. Instead of happy, I feel a bit lonely however. Although I can find much much more better players on the Internet, they cannot really inspire my enthusiasm so deeply.
My friend has never read any Go book. It skills are all acquired by gaming experience. It has probably played more than 2000 games.
He is full of game experiences, but lacking book knowledge; I am full of book knowledge, but lacking game experiences.