The Ear-reddening Game, played in 1846[1] by Shusaku against Gennan Inseki is one of the most famous in go history, containing the ear-reddening move.

Shusaku was 17 years old at the time of the game and 4 dan. Gennan on the other hand was close to 50 years old, an established 8 dan, and head of House Inoue. It was thus a great privilege for Shusaku to play Gennan. The first game was played with two stones handicap, but it became clear that Shusaku was too strong for that handicap.

In their second game Shusaku took Black. After making a mistake in the taisha joseki (see below) played in the lower right corner, Shusaku played well. Gennan had closed the no-komi gap however so the game was very close. The game continued to move 127, the famous ear-reddening move (below).

Eventually Shusaku won the game by 2 points after 325 moves, in spite of stubborn resistance by Gennan in a ko he could not hope to win[2] from move 229 to 311. 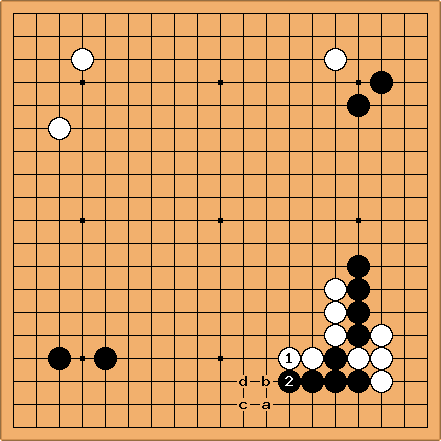 is usually considered a mistake: Black should slide to a, White b, then Black c.[3] (If Black turns at d instead of extending to c, then Black will fall into a losing ladder.) This allowed Gennan to close the no-komi gap early in the game.

While no-komi Leela Zero[7] agrees[6] that

is an error, estimating a 5% reduction in win rate, this traditional judgement is not perhaps as clear-cut as it might seem.

has continued to appear off and on. Choe Myeong-hun played it against Yi Chang-ho in game 2 of the 3rd Cheonweon in 1998 and most recently Tang Weixing played it in the China Weiqi League in 2009.

as move 126, when Shusaku played

Gennans ears flushed red. This is a sign that he had been upset. [2] 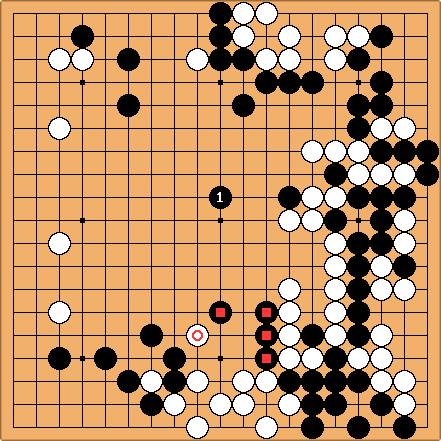 has different objectives. It expands Blacks moyo at the top, it helps the four black stones marked

[4], it reduces the influence of Whites strong position to the right, and it also has an eye on Whites moyo on the left side.

White should probably have forced with 1 before 3. Black cannot allow White a so this would have prevented Blacks good move in the previous diagram. White can expect more profit from his attack now since his thickness is working more efficiently. 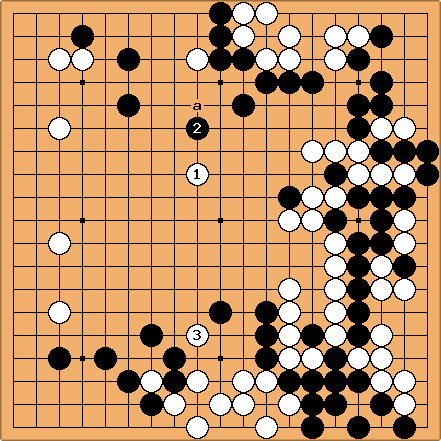 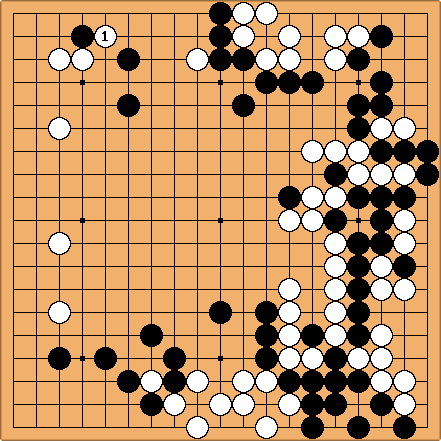 Or perhaps Gennan should simply have secured territory in the top left corner. That is Elf's choice in the Elf GoGoD commentaries. It is not easy to use the bots to judge this position, because most of them assume 7.5 komi and in that case White has an easy win (but see the no-komi variant below).

Since the advent of strong bots, we are in a position to evaluate the quality of the move. As mentioned below, the AI programs do not really consider this move as a candidate and when force fed the move, evaluate it as less valuable than the more mundane candidates. In particular, Leela Zero gives the following analysis: 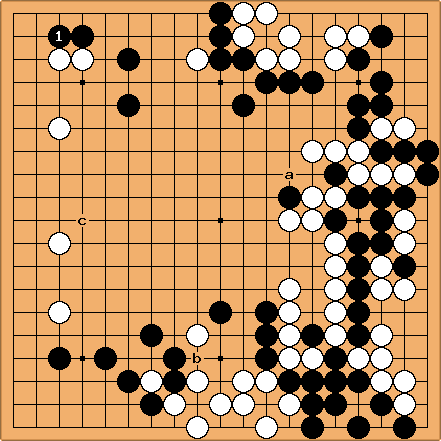 Lizzie's choice is the second line stretch at

here. Without komi, she gives Black 57,7% chance of winning this way (51K play-outs). Other moves considered are the forcing peep at a, the push at b and the shoulder hit at c. 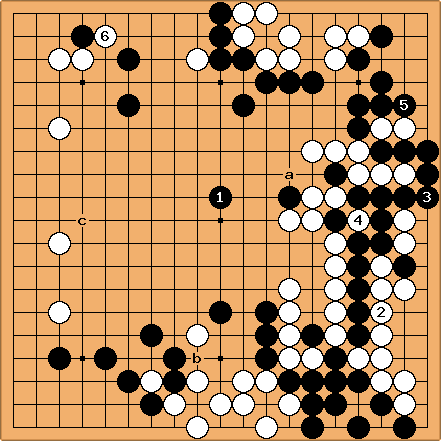 When fed the ear reddening move, Lizzie executes an incidental forcing sequence on the right side, then plays the big point

, which confirms her original choice for Black instead of the ear reddening move. She gives White 48,2% which boils down to a 5,9% decrease in Black's win rate when respect to the first diagram.

In a recent book [5] Yoda Norimoto, a top Japanese pro, published a commentary on this game. Yoda introduces the game as Shusakus most famous game. He goes on to say that in his opinion, although it is a fine game (rippa na), it is not so outstanding. Later in the game commentary, regarding the famous ear reddening move, Yoda quotes Go Seigen as saying that any first class pro would play something like that. Yoda concludes by saying that he doesnt think this move is fantastically amazing.

An analysis[7] by a variant of Leela Zero[6] using komi 0 prefers the push at C18, and thinks the ear-reddening move lowers the win rate by 5.9%. It is summarized above. There's also a video

https://youtu.be/9BVe6T4WEtE in Russian, by Alexander Dinerchtein where he uses LZ to analyze this position.

[3] Note: Although the taisha joseki appears as early as 1705 in GoGoD, the variation here first appears only four months before this game. In that earlier appearance, Nakagawa Junsetsu played the extension at

in the diagram above against Shusaku, who answered with the same

, pushing from behind. Shusaku won the earlier game - he held Black after all :) The better slide mentioned above does not enter history until 1929 when Inoue Ichiro played it against Hayashi Yutaro in the Oteai.

[4] A note in Invincible elaborates that due to the influence of the ear-reddening move, capturing the Black center stones is too small scale.

https://www.reddit.com/r/cbaduk/comments/8wo1ni/new_approach_success_modification_of_lz_became/ describes a version of Leela Zero trained to work with variable komi.