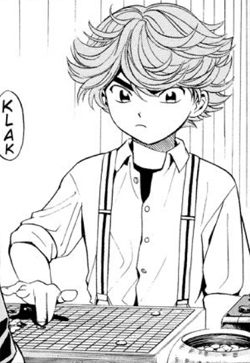 Yuki Mitani (三谷 祐輝 Mitani Yūki) is a character in Hikaru no Go.

Yuki is a player at the Haze Middle School Go club. Kimihiro Tsutsui tells Hikaru Shindo that Yuki did very well on the Go flyer quiz placed to recruit people into the club. Hikaru meets Yuki at a Go salon. Yuki intends to cheat so he can take the money of his opponent, Dake-san (Mr. Dake). However Dake-san reveals his true strength and crushes Yuki in a dirty way. It turns out Shu, the salon owner, had hired Dake-san to teach Yuki to not cheat. But Dake-san takes all of Yuki's 10,000 yen (about 90 U.S. dollars), and it proves to be an excessively harsh lesson. Hikaru challenges Dake-san, and with Fujiwara-no-Sai's help, wins back the money. Yuki decides to go to the Go club after Hikaru gives back the money. Hikaru, Kimihiro, and Yuki play in the Summer Go Tournament and lose to Kaio Middle School. Later Yuki is enraged when Hikaru decides to quit so he can be an insei. Yuki quits the club when Hikaru quits. Yuki ends up returning from time to time afterwards.

Yuki's voice actor (seiyu) in the Japanese version of the anime is Yuu Asakawa. In the English version his voice actor is Cathy Weseluck.