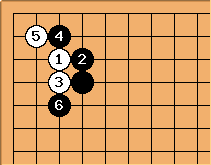 Scartol: I apologize if this seems like a facile question, but I'm starting to get into the 3-3 invasion, and I don't know what I'm doing.

Suppose Black plays the low hane instead of the high with

, but what then? Can't Black come around with

and slam into White's corner, possibly killing it?

Bill: I think that usually

Adamzero: For Black to make the hane at

is unreasonable. It could lead to many possible results, three of which I've shown, and none of which are any good for Black. 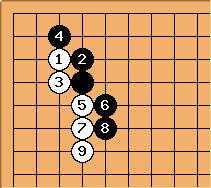 The first diagram lets White make territory on the fourth line and leaves Black with tons of cutting points. 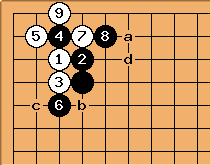 The second diagram lets White live easily and get the aji of the clamp at a or, considering the strength of White's corner, the cut at b or the hane at c if Black responds to protect at d. 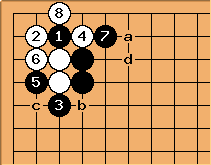 The third diagram leaves Black with even more cutting points, and Black cannot prevent White from using at least one of them, if desired.

JamesA: Sorry, Adamzero, but I'm not sure your analysis is correct! 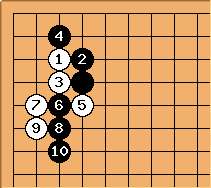 is an overplay. Can't Black cut with 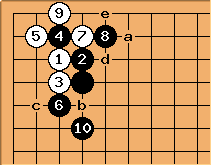 White [Do you mean Black here?] can play at

, eliminating the cut at b in your diagram, and taking away the value of c. Black is now thick on the outside - I think this position is OK for Black. The clamp at a is a gote endgame move; if Black answers with d, White must then play e. This is only big if Black tries to make territory at the top.

Bill Spight: White can cut at d instead, and Black has no ladder.

is better at b. 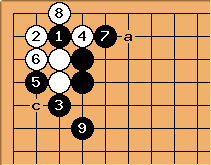 This sequence is more or less the same as the last. Black should finish up with

, leaving very little aji for White. Black is pretty thick again. However, this is not as good as the joseki variations covered earlier.

Adamzero: Thanks for the corrections. 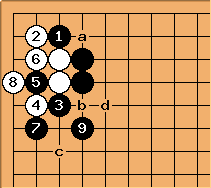 Dieter 1d: In answer to

, White can also counter hane and leave the capture at a for later.

is to prevent the cut at b. After this joseki, White has peeps at c and/or d.

Bill: That is joseki? 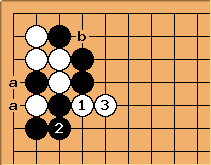 , Black has difficulties. Now a and b are miai for White to live in the corner. 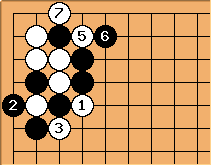 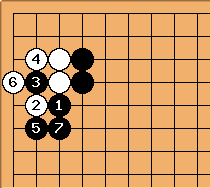 Dieter: You are right Bill, I was getting confused with this line of play.

DJ: I have changed the name of the diagram, which cannot really be considered Joseki, see 44Point33InvasionJosekiHaneInsideCut.

Bill: In response to a question by mAsterdam as to when the second line hane is correct, here is the only case I know. It is one joseki when Black makes a one-space pincer. 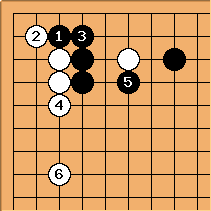 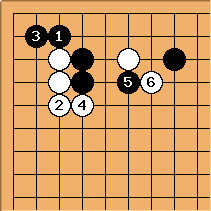 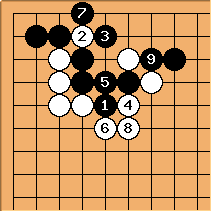 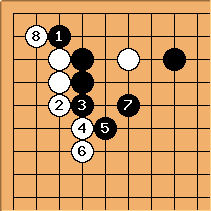