No recognised term aimed at weaker players, of the mildly derogatory type, has any stature in English-speaking go circles.

Bignose: I'm afraid I don't understand what it is you're trying to say with this page, even after several readings. Are you saying that we should not use the term "weaker player" at all? Are you suggesting DFK and SFK as replacements? That's not satisfactory; "weaker player" is often used as a *relative* term; i.e. weaker than the person whom we are discussing (or myself, if no other context is given). If you've got some other purpose for this page, please make it a bit clearer (and erase these confused questions :-)

Charles Matthews Chess players use patzer as a not-too-unpleasant term for weaker players. But the point is that nothing corresponds to that, in go usage.

phenomene By the way, in chapter 3 of the book A compendium of trick plays, there is a imaginary dialogue between the weaker player Joe Patzer and the master Dogaku Sensei. The only occurrence of patzer in go as far as I know.

Jenny Radcliffe: Indeed, but does it need to? If you mean a term for a player weaker than yourself, I don't see that any term other than "weaker player" is needed. But for clarifying strength, the terms "DFK" and "SFK" would be useful, if they were more main-stream.

Charles I think the point that generally may need explaining, for those of us who come to go from 'outside', i.e. not from an Asian culture, is this. The hierarchy as set up of kyu and dan, amateur and pro, is explicit in what it implies, one way round. To show respect for stronger players is the practical way to express respect for the game itself, as a traditional art. What is only implicit is how it works in the opposite direction. Stronger players owe respect to the game too, in the way they study it and carry on the tradition; but the public face of that ought to show in the treatment of any weaker players or pupils. It is hard not to be patronising in some way, if one is to give any helpful advice at all. But a great deal can be done in creating a good climate, dispelling the idea that people are valued only for their skill in the game. Therefore I'd quite agree that we don't need a term with any sort of 'loser' implication. Better to use 'social player', 'club player' and so on.

Bignose: Charles, by wanting to replace the term "weaker player" with absolute measures like "social player", "club player" et al, you're still under the impression that "weaker player" is (exclusively) a term of absolute measure. My experience is quite contrary; "weaker player" is almost always used *in the context of a player who is stronger*. In this, it's simply a statement of fact about relative playing ability, not placing them in some sort of social pecking order. If you have a complaint with using "weaker player" to *label* someone, then I agree that's a bad thing. But if so, please make that explicit to distinguish from the (IMHO) non-derogatory usage.

Charles I don't really take the point here. There is politeness, which I think I manage on a practical basis. Then there is politics: for whose benefit things are run. And then there is promotion - growing the game - and the constant need to bear in mind that no one is born a dan player. When a group playing the game reaches some sort of stability you do get a parting of the ways between these things. Obviously 'weaker' is comparative. I could cite an example where 'very weak' was directed at 1 kyu players. In other words, I suppose, I'm really trying to look at social dynamics of clubs and institutions, rather than simply discuss what is 'polically correct' terminology.

Jasonred : So, the question is why there isn't a derogatory term for weaker players, unlike chess? Here's a theory: Firstly, yes, the environment of respect. Second, go, because everyone knows their relative strength, due to the rating system, so mismatches happen less, and are less severe. Trust me, if you dan players kept having to play weaker players without knowing the handicap, or even that they were weaker in the first place, you'd be cursing us too! Try stepping on court with the NBA with your workmates and challenging them to a serious game, you can look forward to getting chased off the court... Thirdly, go players, when we find beginners, most of us try to be as kind and encouraging as possible with them as possible to "promote" go. Whereas my attitude with chess is a lot more relaxed, I really don't care either way whether they take up the game or not.

Migeru : The one thing I dislike about Hikaru No Go is the attitudes that the characters display towards each other. For the most part we see very talented brats constantly demeaning weaker players, only acknowledging players of equal or higher strength, being sore losers and bad winners, having no respect for older players who are weaker... And the professionals are not depicted in a better light, either. Is this a reflection of the competitive professional culture, of the manga audience, or what? The characters I like most are Izumi-san, Kurata Sensei, and of course Sai... and I think the reason is that they behave more in the way described on this page. Naturally, Ochi is a particularly annoying character to me.

Bill: Hmmm. American children are portrayed as brats on sitcoms, too.

Charles I see bits of other anime since there is a fan in the family. They all tend to have this kind of culture around conflicts: of grimacing, name-calling and so on. Straight out of the playground, naturally. The Hikaru manga and anime have had to conform to that pattern to succeed. Tells you nothing much about go except how it might appear to a Dragonball Z reader.

Jasonred: Oh, and as for Charles bit about Asian culture and hierarchy... it's true, but only up to a point. Karate has similar hierarchy with grades, but in fact, there are a number of people who think poorly of the less capable students. Especially the less capable ones who just happen to have a higher grade. Or the ones who fail to advance for a long time. In fact, there's something similar to "hazing" even in most hierarchy based systems. And I'm Asian myself, so I know what I'm talking about. There is sometimes the intention for the climate described by Charles, but... human nature passes all boundaries. Except, evidently, the boundaries of Go! Go, Go!

Charles Sure, human nature means things are never perfect. A little 'human nature' goes a long way, though. My comments are really directed at stronger players who assume the system must be set up solely for the benefit of its 'serious' users.

HolIgor: Let's add some diagrams to this discussion. 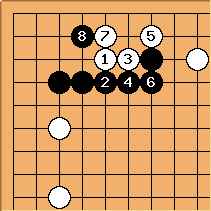 Yoshida gives this variation with the comment that this is how single digit kyu players treat this situation. I guess that it is good but there are other variations that have to be considered. 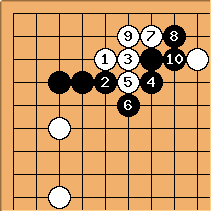 Scary, don't you think so? Now, the main variation gives white life in the corner while black becomes thick. But this is the thickness without much of the territory forming potential, fighting thickness? Can we transform it into points? 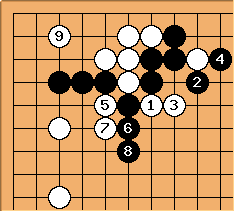 SDK, don't you think that black is good here? Oh, perhaps, you didn't know that black's 3 stones make life in sente? Oh, that explains it.

PlatinumDragon: We all should know that the writen character for ten is only one character, so 10-kyu may sometimes be consider SDK, well at least for some East Asians. There use to be no ranks lower than kukyu. It used to be: either you are strong enough to be kukyu, or you are not strong enough to have a rank. DDK is therefore not a derogatory term because at least you have a rank.