What is Black's, resp. White's status after 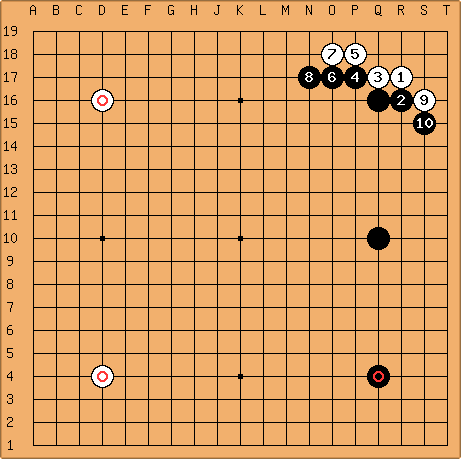 Tderz: For most of us this development is a common, resp. well-known invasion sequence.

are not important for my forthcoming question, nor whether 3-3 should be played so early in the game. 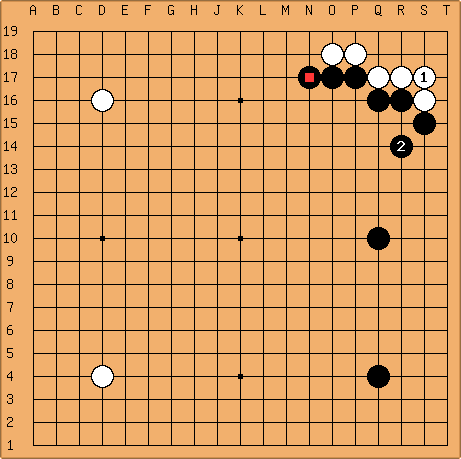 is good shape. Sometimes however,
Black wants more ...
and gets less ...

Ok - one precondition - ladders to lower left corner should work for White.

is preventing the ladder ... (edit): This move doesn't give a good shape.

prevents again against the ladder.

Here comes the problem:
What will it be after

I wish all Senseis happy holidays!

Remember that the ladder works for White (with a White stone in the bottom left corner).

In this situation the circled points are two possible places where White can continue to play. Black is going to get something... but using that aforementioned working ladder for White limits Black's options.

If Black plays at "a", Black will be looking to attack that singular White cutting stone and direct territory along the top. (While wishing that stone on the left side of the board on the star point was a Black stone). Black must be satisfied with giving up the square marked stones and letting White take the corner reaching out to the right side.

If Black plays at "b", Black will be looking to attack the corner and gain an attacking edge on the right side. (The three Black stones can be captured in a ladder. White will need to play a move to make the ladder and another move to take the stones if ladder breakers exist). Black must be satisfied with giving up the circle marked stones and/or the laddered stones and let White take the influence along the top.

This problem is unsolved.