DJ How many 6k know the reason behind

in the diagram below?
It is one of the first Joseki we learn, maybe already around 10k... 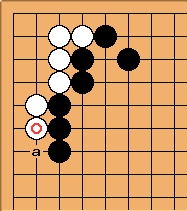 Answer: a black play at a is not sente against White's corner group.
Therefore White accepts a local loss (only one more point of territory against a difficult-to evaluate increase of thickness for Black) because it negates a sente move to the opponent: this is judged equal by pro's.
How many advanced amateurs, even at Shodan's level, are really able to perform such an evaluation on their own, without being told beforehand???!!??

Coconuts: I don't think it is that much of a stretch to come up with a reason for that move. If I was playing Black and White left out

I would immediately block in sente and extend down the left side. As White I wouldn't want that to happen, so extend first. It's not too hard to see a as gote, allowing White to either jump into the side or leaving it open below a...

Alex Weldon: I'm with Coconuts on this one. If someone is single-digit kyu and can't figure out without being told that the purpose behind that move is to avoid being completely shut off from the left side in sente, there's a serious hole in their knowledge that needs addressing.

Charles On the other hand, there is a valuable general principle on suji here: crawl once more, to prevent the blocking move becoming sente. This is an exception to 'the second line is the route to defeat'.

Bill: It is also an example of the proverb, Play double sente early.

And it is not really a local loss. Compare Black's thickness with his thickness if he gets to play

Moved from A Zen way to joseki.

Reformatted topic into To crawl or not to crawl