It is also possible to make the three-space extension on the fourth line.

Here, Black makes a three-space extension from a wall.

Black can follow-up with

here to make a robust shape.

, a one-point jump, is another alternative for developing from the three-space extension. 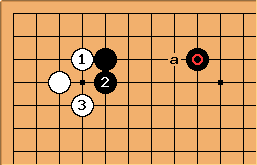 If for whatever reason White plays the diagonal attachment at

, Black's marked stone ends up ideally placed after the stand of

(see extension from a wall). One line closer at a would be over-concentrated, that is, worse, from the point of view of good development. 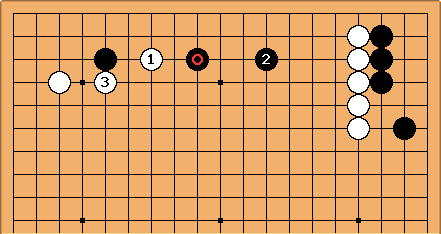 Depending on the situation, Black may also choose to treat one of the stones in the formation lightly for the sake of development.[1] This type of sequence might be appropriate if White is strong in the upper right, as here. In that case Black a, White b might be good for White, and Black is better allowing 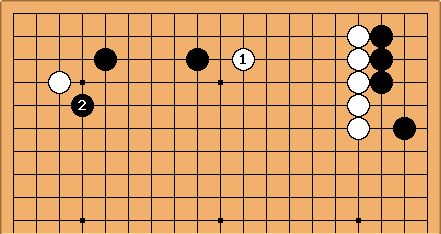 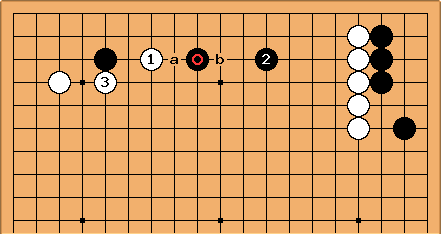 Bill: In this particular situation,

is problematic because it approaches White's wall, while extending only to a instead of

allows White to play at b. 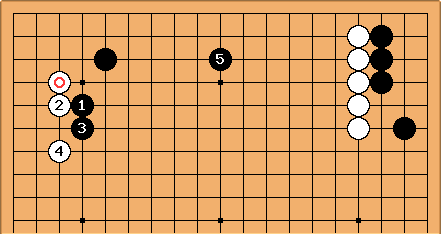 Bill: To avoid the problems of an immediate extension,

, preparing for a safe extension to

Charles This idea of Bill's, to use the 3-5 point low approach, press, is a bit more subtle than may seem at first glance. For example,

is held back one line, giving White much less chance of fighting on this side.