One of the three-space extension invasions is at the centre of a third line extension.

The move Black will choose to respond will greatly depend on the circumstances, but mostly these moves reflect the following intentions:

We will have a look at typical sequences fired off by these moves. However, the practical applications will nearly always involve neighbouring stones, which greatly affect the events and therefore also the appropriate choice of move.

First of all, if Black is not intending to crosscut with

, he should not play

in the first place, unless these are endgame tactics. We are thinking of this position as a middle game invasion, so cut and connect are the governing principles.

Black sacrifices to get outside influence, while White gets some territory. Next, White can move out at a (considered correct) or b (unusual), or leave that choice to Black by capturing at c immediately (mild). The cut at d is unreasonable. Again, the presence of other stones may justify any choice.

Animation and discussion at GoKibitz

This cut is unreasonable.

Attaching on top is technically the same idea, sacrificing a stone, but obviously with the opposite result. Black connects underneath, while White makes a ponnuki. This sequence can be played when the connection is vital for Black and the resulting influence for White is acceptable, e.g. overlapping with already existing influence.

shows an attacking mood, which must be justified by the presence of other black stones, such as e.g. at the circled point, where the formation represents a low enclosure low extension invasion.

is appropriate, though contrary to basic instinct. We can now envision Black playing a as basic instinct and White jumping out at b.

The basic instinct of

puts white on the spot: now she has to play an empty triangle with

. Imagine a stone already awaiting her at a: the invasion will fail.

is stylish, but Black cuts nevertheless and White will at best live very small. It is not said this line is impossible though: both must take it into account.

symplicity: Won't it often be better for white to capture the stone? Black has some followups like sacrificing two and squeezing, but white escapes any major attack and has gained some rightward strength.

can also be played here. White remains with the burden of creating an empty triangle or be cut at a.

A stylish move which may work is this 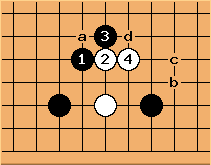 The keima is also a typical move for attacking, but Black does not seem to take the advantage he could in this position. Next, a to d are all conceivable. If Black already has a stone at c that again has a major effect. 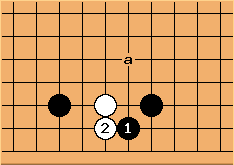 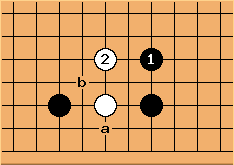 shows a defensive intention, so probably Black is not in a position to attack here. If White jumps too, crossing under with a remains possible for Black, so maybe White should play b, assuming this is actually her sphere of influence. 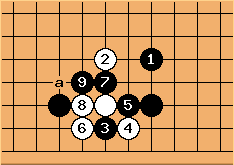 . This is rarely a desirable result for White but now the cut at a may work.