This comes from a series of articles writen by Craig R. Hutchinson for Go Winds. Basically, the series goes over several 3-stone combinations near the edge of the board and covers various ways to peep at these shapes and possible responses. The author gives them creative names like "lion", "collie", "jaguar", etc. The particular article in question comes from the Winter 2004 edition,Volume 7, Number 4. The author is a well-known AGA achivist, editor, and translator of go books in the US, but the series is inspired by his own research and not a summary or translation of pro works. [1]

The real board Youtube teacher James Story made a video on this topic,

the Lion on the Jaguar, based on Craig's book Go Shapes. 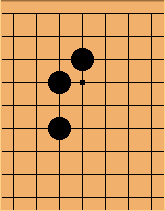 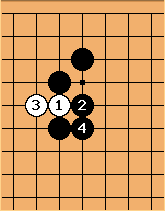 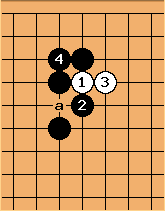 torij?: This shape occurs often as a side joseki. 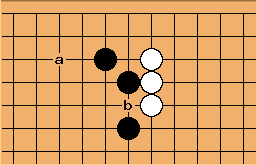 This is a common way to run out to center, but black needs to take care if white has a stone at 'a'. If so, then black should in most cases block directly at 'b' in order to keep white separate. 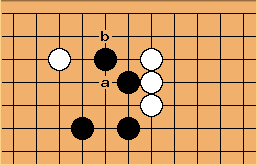 This is a common response from black, but it is a weak shape. It is impossible for black to harass white's three weak stones now because white has either 'a' or 'b' to reach safety. White 'a' is a shape tesuji that can be found in 'Lessons in the Fundamentals of Go' by Kageyama. 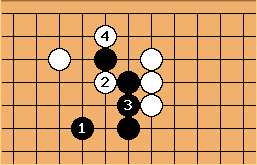 Black cannot resist white 2, so blocking at 3 is about the best thing to do.

is a very considerable option.
If one wants to answer at all, inducing the solid connection at a by atari 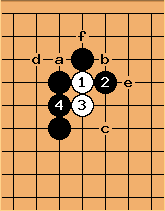 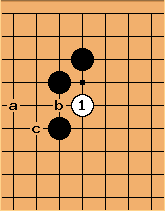 If white peeps at 1 black should respond with a, b, or c.

Alex: Why a? That looks like bad shape to me. One line above, making a second "lion shape" would appear to be correct shape to me, assuming solid connection would be too heavy. 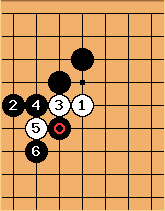 Alex: That doesn't answer the question. I said it was bad shape, which is not the same thing as saying it can be cut directly. White has many possible forcing moves to choose from this way, whereas he would have none of Black connected solidly. The only reason not to connect solidly would be to a) create eyeshape, or b) treat

lightly, neither of which

does very well. What is the motivation for this move vs. solid connection? By contrast, here is what would happen with the move I suggested as better shape... I feel Black's stones are working more efficiently here: 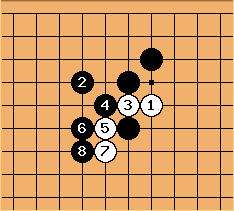 tderz: Reply 'a' in diagram above is a mistake by typing,
not a mystake by mystery. (learnt this pun once from JohnF: syllygism i.o. syllogism)
In above example it's even unclear to me where the edge is, i.e. whether it?s a small shimari with extension.

The hoshi shown has to be the upper center hoshi, so it couldn't be a shimari. 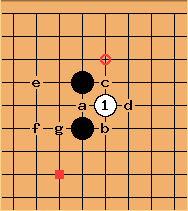 tderzGoing back to the basics or at least to what I think they are,
any peep can be either connected tightly (i.e. a, cf. EvenAMoronConnectsAgainstAPeep[1]) or
defended lightly (b/c, even d or e/f),
cf. resp. WhenNotToConnectAgainstAPeep and AmIReallyAMoronIfIDontConnectAgainstThePeep.

The mentioned g in above diagram is for special situations,depending on other white stones around

and in the corner (e.g. Joseki, 3rd diagram on page EvenAMoronConnectsAgainstAPeep

I read about this shape in an article recently, the diagrams I posted are all I could remember from the article. If you think any of them are incorrect please alter them or add a diagram of your own variations. I added this page in the hopes that someone could fill in the blanks(and because I couldn't find this shape anywhere on SL).

Bill: Could you tell us what article you read?[1] This is not a usual shape (which is why you didn't find anything about it on SL), and, except for the peep, these plays against it don't make much sense unless there are White stones nearby that are not shown.

reply: I think it was called 'Go Shapes'(probably a series) and it was in a copy of 'Go Winds'. There were two pages of examples of different variations/sequences. Most of them had to do with peeps, but I think there were a few that didn't.

xela: There is a very brief mention of this shape in Shape Up, chapter 3, page 44. 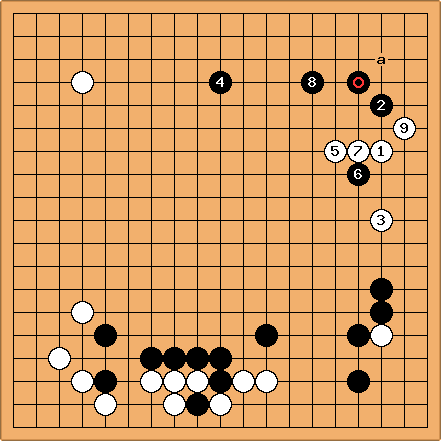 Bill: I did a GoBase search, and found that perhaps the purest form of the lion shape is this enclosure in the top right corner. The diagonal play,

, is a common play against it. Later White got in an invasion at a. 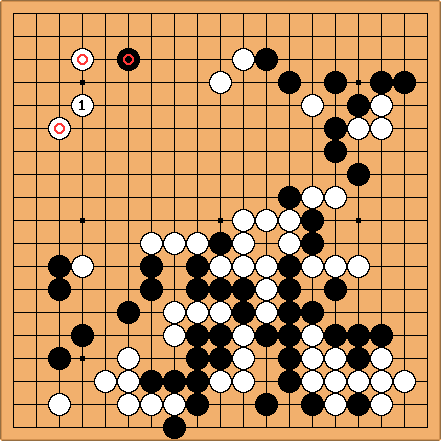 Bill: Another way this shape often arises is from protecting the large knight's enclosure (

) from the approach with 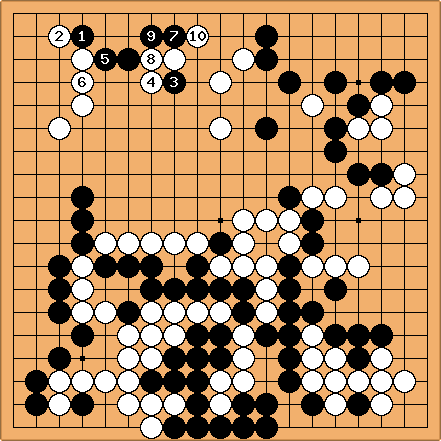 is a common continuation against White's corner. 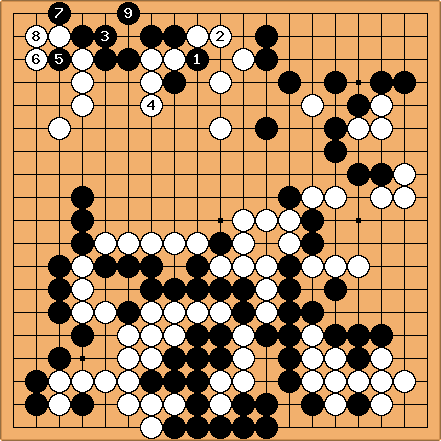 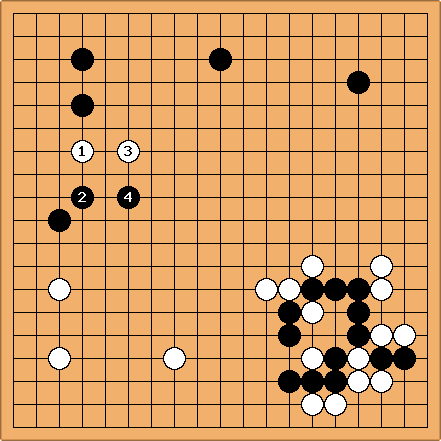 Bill: In reply to

, forming the lion shape. This kind of running shape appeared less frequently in my search than the enclosures. There were always opposing stones close by, which affects the tactics. 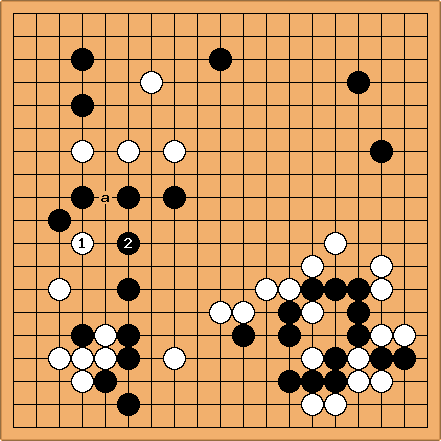 , possibly aiming at the wedge at a.

prevents that and connects Black's groups in the bottom left quadrant.

[1] The specific edtion with "lion" is not available online, but a similar shape called "panther" is discussed in this issue, which can be downloaded: 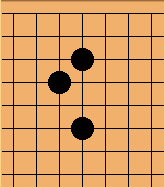