Another excellent book from Ishikura, this one is aimed principally at single-digit kyus, through early dan level. As in his previous Nihon Kiin lecture volumes, he offers a superbly chosen collection of amateur-level positions for in-depth analysis, presenting not only recommended lines of play but also mistaken lines, for punishment or avoidance. He particularly dwells on potentially hard-to-meet responses from opponents, in the recommended lines, along with other matters of tactical detail that are likely to trouble readers at the targeted level. For instance, whenever he declares some open-looking corner or side position safe from invasion, he always demonstrates with several plausible attempts that end with every invading stone captured by the defender, and he makes general suggestions applicable to other, similar positions. He doesn't seem to leave loose ends. He has an uncanny knack of anticipating exactly where additional detail will help a reader, yet without overexplaining. His style of presentation is extremely clear. There are enough diagrams so that no board set-up is necessary.

The table of contents lists some of the themes explored in this volume but, somehow, it doesn't matter much what the declared topics are -- as with his previous lecture volumes, whatever happens to be presented this time around, if you absorb it, it will improve your game.

Probably the biggest difference between this volume and his earlier ones is that instead of arranging the theme diagrams into sets of variations on some common topic, here his macro-units of study are complete model games, starting with

, and proceeding to the beginning of the yose stage. So for each game he discusses not only matters frequently presented in isolation, such as fuseki, joseki, middle game fighting, etc., but also more subtle matters relating to the overall flow of a game, such as how long to stick to a local situation before grabbing sente and moving on, or how to keep sente (when possible) if we have it.

We learn, by osmosis, how much can reasonably be expected from a sound line of play, and how not to fall prey to the serious fault of "jealousy". At the final diagram of each game, he estimates the score at that point, and it can be quite eye-opening to see that some apparently calm line of play has actually led to a fine result, and that the opponent's territories are just not as big as they look.

The other important feature of this volume --advertised in the title-- is that Ishikura has codified the Go knowledge he finds most useful for readers at the targeted strength level into twelve brief groups of clear and simple rules, which he puts forth as a pretty much complete guide to conducting a game. He says in his preface, "Everyone wants to get stronger, but no one understands how... so this book is offered as a shortcut to improvement." He is emphatic that "firm mastery" (and actual use!) will suffice to propel a kyu player to shodan, and a low dan player to mid-dan level. To make his point, he uses these rules as the primary basis of his analyses. Here they are, as listed in the book even before the table of contents:

These rules are far from radical!

Nuances are explored in the examples. Other standard principles and proverbs also get invoked, but they are treated as supplemental to the ones listed here. The tacit message seems to be that working hard to master the featured ones will have the biggest and quickest impact on one's game. Other topics can come along side them, or later.

At any rate, Ishikura is a great believer in the didactic power of repetition, and each time a rule is about to be invoked, he restates it in bold-faced font. I can confirm that this is a big help. In fact, the rules whose repeated application made the biggest impact on me are point 1 from set 3, "first defend your own weak groups", and point 3 from set 5, "Protect your own weaknesses." Probably no one wants to conduct an overly defensive game, but I now see that I have been committing overly reckless neglect of defense.

It is a little hard to say how many distinct games are actually analyzed, since so many variations are followed in great depth, and there are even alternative universes in which nearly complete games are rolled back to just before some critical mistake or crucial decision and then played out in alternate ways. How do we count that? Maybe ten is a fair number.

The games are very clean. That is, they are almost certainly model games, not real ones, in which once a serious mistake is made, punishing vengeance is swift! The fumbled responses are left for the variations, not the main line, and unpunished overplays don't hang around for the next thirty moves, as they might in a genuine amateur game.

On a personal note, my job took me away from home for much of this past summer, where I found a few colleagues who played Go at lunchtime. Since I was alone many evenings, I had a lot of time to spend on several Ishikura books. There are a number of positions where he says something like, "This line of play is a bit difficult, but master the variations and your whole game will improve." Or even, once, "The line of play just initiated by White is unsound, but it is popular with amateurs in this kind of position. Since correct response can get tricky, in this section we will develop a simple but effective counterplan. Master these variations, and the next time your opponent springs this on you, say to yourself, 'goody goody!' "

So I concentrated on those local positions, practicing over an actual board. To my astonishment, several of them showed up in my lunchtime games within days of my studying them; and to my opponents' astonishment, their positions crumbled!

The present book contains a number of passages on good Go study habits. These include unsurprising remarks on reviewing one's own games, working through many tsume-go problems of only moderate difficulty, and the like. One new thing I learned, though: the Japanese language has a word, tsundoku (積ん読), which means 'buying books but not reading them"!

Here are some (partial) diagrams from the book, with summarized discussion. 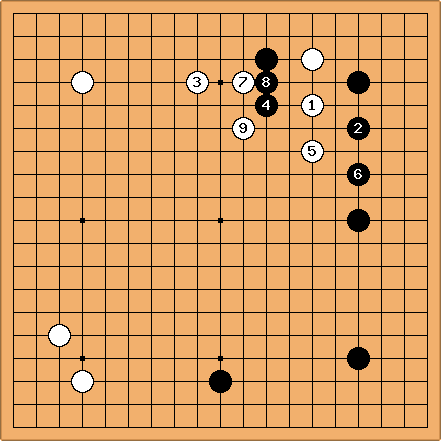 , having just been pincered. Ishikura remarks that while a pro would usually jump into the corner at the 3-3 point, the present move is popular with amateurs. Though he doesn't suggest that

is unplayable, the continuation, the high counterpincer of

, is called "a bit unreasonable-looking". But not knowing how to respond will give B a tough time. Starting with

, for instance, can lead to B having to make life, with difficulty, for an enclosed group, while W gets outer thickness. 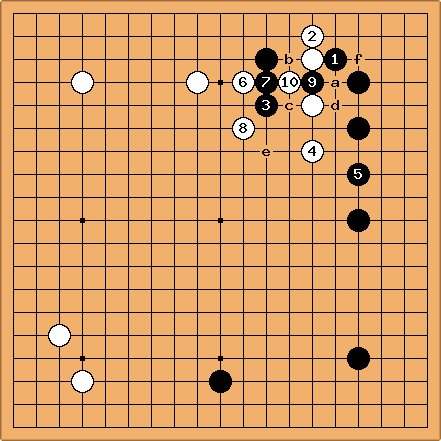 The key move in this position is to play

in the diagram above, both protecting B's corner and anticipating the thrust of

both defend B while they pressure W.

is followed by Ba, Wb and Bc. If

is played at a instead, then following Bd and W at 9, the defensive move of Be is *much* more important (remember that

has been omitted) than defending against the cut at f. If W does cut there, the key is then to regard tbe original

as an expired forcing stone and play not to save it but to defend the corner from the inside and resume the attack on W's group.

(Note: this is at least three separate diagrams from the book condensed into one -- the book diagrams are not cluttered.) 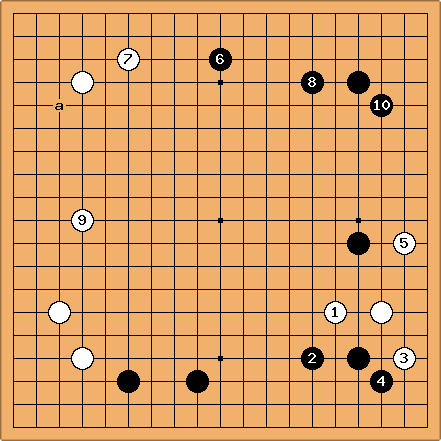 This is part of Ishikura's "secret plan" for victory with the ni-ren-sei. The earlier moves of the fuseki have already been thoroughly discussed, as well as the outcome of

at the 3-3 point, in response to the pincer. Following the present

(the catenaccio joseki) are calm and ordinary. But after

at a, sente passes to to B, and in fact W's lower right shape is highly vulnerable! 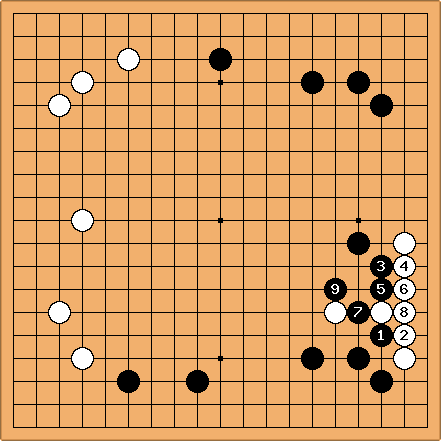 The "secret move" is 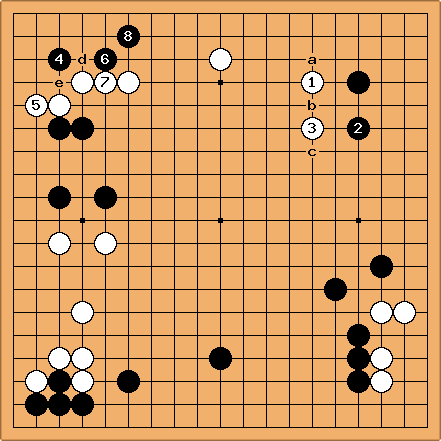 is very center oriented and is played in this position as a special plan, to counter B's lower moyo.

is then urgent, as a B stone there would give B a greatly expanded moyo. B's next move? If

had been at a and b, respectively, then

at c would have been ideal for B's moyo, which is what W wanted to prevent. But no such move is now available. Biggest move instead, for B?

The answer according to Ishikura, is

, an unusually large invasion, a 30 point gain over the result if

had been played first, making the invasion impossible. (The impossibility is demonstrated earlier in the book, as well as in some of Ishikura's earlier books.) B's left side group is strong enough to survive the inevitable counterattack, to come later. Ishikura urges the reader to master the details of the invasion sequence, as the upper left corner configuration is very common.

, at d and e, are shown to lead to inferior results, in this position. 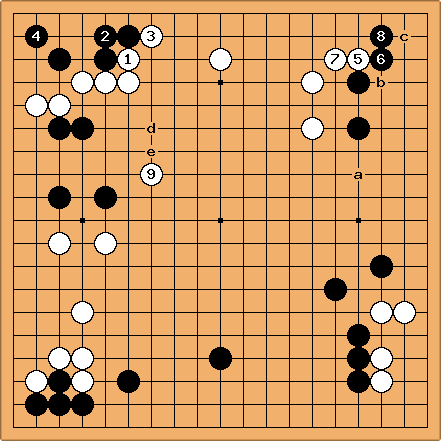 B is alive in the corner, so W takes sente on the right. Ishikura notes that

is a huge move, nearly as big as the preceding invasion! If instead, say, B plays at a, followed by W at 8, Bb, Wc, then taking the potential yose moves into account, the swing is 26 points.

How to respond to

? A local blocking move is too small -- now is the time to make moyo/territory while attacking B's upper left group (point 5 of rule set 5!), starting with

. While B defends, W gets stones at d and e, greatly enlarging his upper side, and also ending with sente to then invade on the lower side. Several diagrams are given to show why

is exactly the right spot for starting the attack, other initial points giving much inferior results.