One of the three-space extension invasions is on the third line at the centre of a mixed-height extension, in which it is the most common. 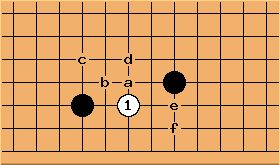 a is the most common answer, b is aggressive and c allows

to escape temporarily but possibly prepares for a large scale attack. d is rather uncommon, while e allows

to escape but forestalls the attachment there.

tapir: a is the most common answer, followed by d, e, f other moves are rarely played in professional practice.

Bill: It is worth noting that this invasion is rare without other stones in the vicinity. 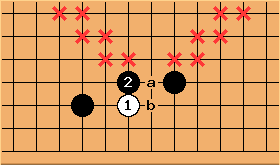 is the primary basic move learned by amateurs as it tries to connect Black's two stones.

at a is usually best, but requires two ladders for White (

) to work. b is not as severe. The other hane is not recommended.

If White wedges, Black must choose between playing atari from above or below. 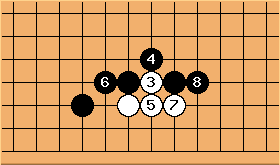 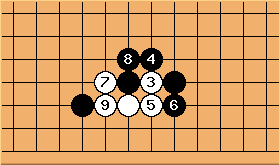 Black can also sacrifice a stone in order to seal off the side and influence the centre. 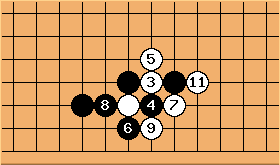 captures in a ladder.

may also be at

: extends is difficult for White but sometimes possible 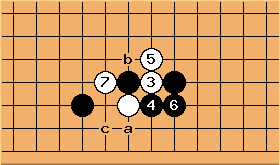 If the ladder after

does not work, then this is catastrophic for White.

Next atari underneath a, White captures at b, and White gets a ponnuki in sente because of the remaining threat to cut (with ko) at c 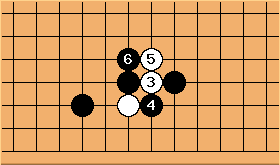 there, which leads to a fight. Note that

is one of the few moves that break both ladders at once. 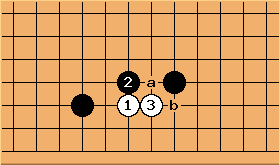 If either of the two ladders doesn't work for White, she cannot play a, since Black chooses the variation; in this case she may play 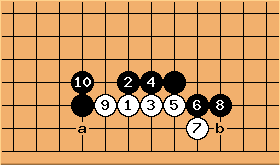 at a. Incidentally, a double hane of

at b will not work: 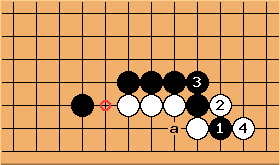 captures a stone. Black cannot exploit the cut at a because there is a liberty at the marked point. 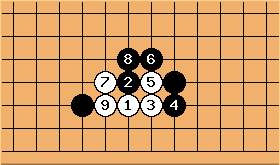 If Black wants, he can still revert to one of the results of the wedge, by blocking at 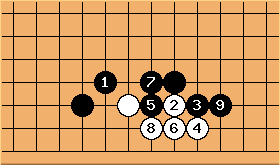 The kosumi is an enclosing move. In the mixed extension, it lacks severity as opposed to countering the invasion of a three space extension on either the third or fourth line. While uncommon in professional play, it is a good response for attacking at times when White's invasion is unreasonable. In contrast to the attachment it does not contact the invader so seeks to avoid giving White momentum to settle (Don'tTouchWeakStones), but conversely has a weaker connection to the fourth line stone so if White settles or gains enough liberties there are possibilities of cuts and counterattacking.

If White uses common techniques for life, attaching at

, she may be submitted into a very low position. 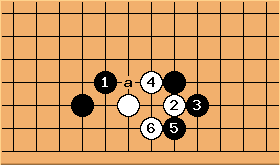 The gap in Black's lines may be better exploited by a bulge. Forming a ko shape would seem a logical result that effectively cuts Black's lines. However- 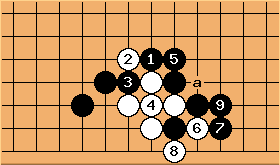 and White is unable to end with good shape. Cutting at immediately at a instead of

requires winning a large ko, impossible in the opening. Otherwise White lives with a dango, and Black makes shape all around. White requires nearby strength to have the ability to pull out

and attack one of the black chains. Otherwise, the invasion lacks severity and Black will profit on the outside. 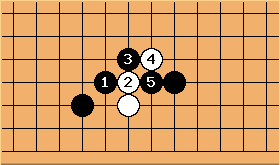 is a bad idea. Black's stone on the 4th line is ideally placed to support the cut at

. White is in dire straits. 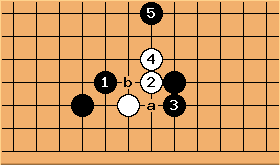 is a powerful but slow way to threaten escape. If Black answers above (

), White lives much more easily. The only problem is White has bad shape, as can be seen after the eventual exchange of a for b. This is another variation Black has the option of playing if the circumstances allow counterattacking the invading stone. 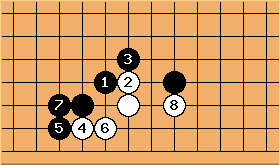 Going back to "pushing through," the tesuji at

is not necessarily a good exchange, but White can enlargen her eyespace this way at the expense of any groups to the left. 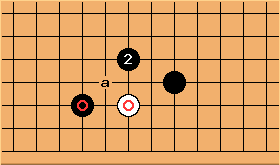 The cap is a large scale, speed-oriented way to play. Looking at the variations for the contact play on the top, note that they often end in gote, for Black, or else in complex nearby fighting. Instead, here, the obvious continuation, dictated by shape is very simple. If White plays

at a, a very large move separating Black's third line stone, Black need not answer locally (or better can settle 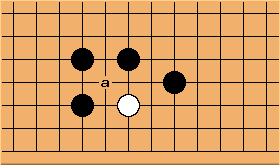 If White does not follow Black's plan and play inside the elephant jump, Black will eventually enclose here. The diagonal move a is typically slow for Black as well. 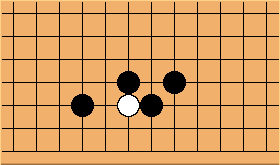 By comparison, the formation after Black gets a second move following the attachment is more simply connected, thicker, has more real/definite territory but is smaller (less potential or maximum territory), has less desire to develop nearby (i.e. is more settled) and is less speedy and/or influential. 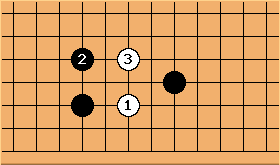 A one point jump from the third line stone is playable, suited for simplicity and defense of the left. White will want to take the key point at

and Black's extension is ruined.

Even though this situation is fundamentally undesirable, White's profit from splitting Black into two groups is not immediate, and there is a good chance that by running out this way White's group will become heavy. In a handicap game or other unreasonable circumstance for

according to Black's plan may be simply doubling down on an untenable fight. 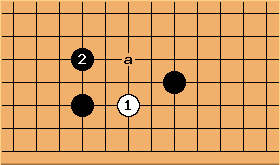 If the separation is not dire, play will continue elsewhere, Black looking after the two sides and aiming for an enclosing move a or thereabouts, White trying to harass the two groups and seeking severe possibilities either before or after Black's next move. 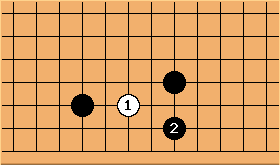 This jump, on the other hand, is a correct move. The shape is excellent, threatening to connect by attaching underneath (or above)

. Clearly center moves will be more commonly the best direction over this second-line defense on the right. In conclusion, there is no easy way, with good shape, to help the third line stone on the left, and this is what requires some planning on the part of the two players when preparing for the invasion.

Hane on the other side 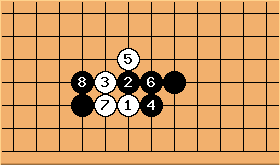 Timm/10k : Is this why the hane on the low side isn't recommended ? 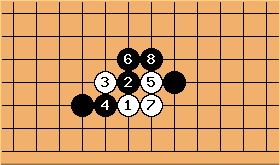 will usually be the only move. Then with the sequence below, considered in isolation White achieves less compared to the recommended moves - harder to live below, and

may be aji keshi on the outside

Timm: Thanks for clarifying.

tapir: d, uncommon acc. to the page is in my database the second most common answer after a, while b is exceedingly rare and c does not happen at all. e and f follow in popularity. See also my question here: BQM584. I notice in the database it seems to be pretty rare in Japan (recently played more by young innovators with more international exposure), while highly common in China and Korea.

The first example is fairly typical, with the Black "standard opening" with the leaning manoeuver prepared or already on the board. 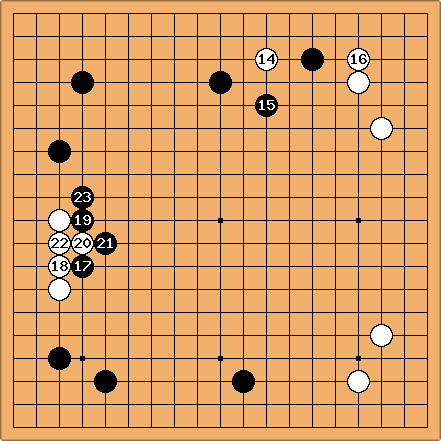 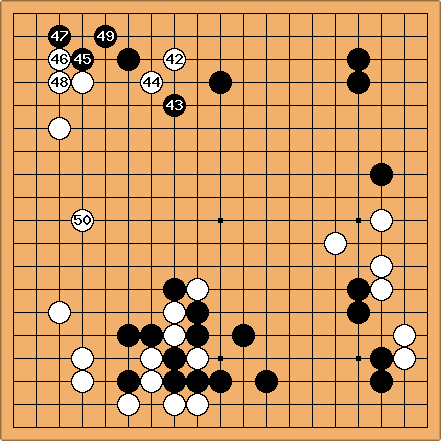