One of the three-space extension invasions is on the fourth line at the centre of a mixed-height extension. 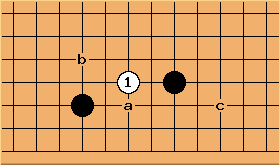 is not as common as the invasion at a (see low invasion of mixed three space extension), because Black's response at a will usually connect the two black stones together. Alternatively, Black may choose to attack

alone is usually not a good play: usually

is used in conjunction with a white stone at c. 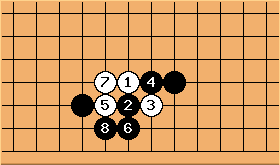 Trying to cut with

is unreasonable. In this diagram, White has achieved nothing. If

, Black will cut at 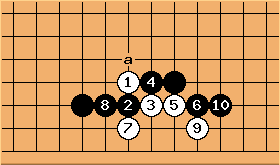 Trying to live this way is too low for white, and tends to give away too much influence to Black. Later, Black a will capture 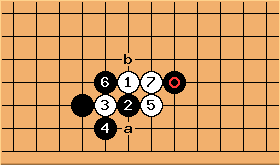 Normally the wedge at

is too big a sacrifice because it gives Black a ponnuki, but in some specific situations separating

may be worth the sacrifice. In some other situations

may be played at a, but Black b can seal the white group in. 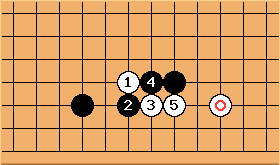 can be a more severe invasion than

works in co-ordination with

is placed in an excellent position, at the vital cutting point. 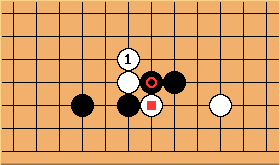 Charles In examples from actual pro games, the previous diagram occurs; but other variations do, too. For example

here before rescuing the cutting stone