One of the three-space extension invasions is an attachment to the higher stone of a mixed-height extension.

Patrick Traill: What about the lower stone? That also links here (from there), but is not treated here! 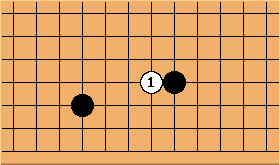 Charles This is one of the (two) standard invasion[3] points.

(DaveSigaty: I can't fully agree. This move needs to be put in context [2])
Charles Someone else referred to Attack and Defense - the book, re another variation for this shape - and that calls this a reduction. Well, maybe it is: and maybe it can turn into a kikashi sequence too. In other writing I have used 'invasion point' as a term for vital point in loose extensions. 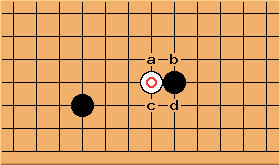 Any of a to d is a possible answer by Black: all we can be sure is that Black should react directly to 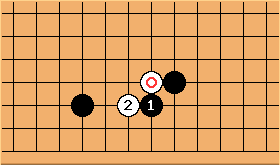 The most common way is

, and then White really must play for a staircase at

. Now Black might connect solidly, or play atari allowing White to set up a ladder. White ought to check the ladder before playing the attachment. 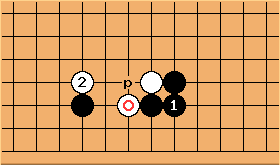 , it is expected[1] that White plays

to try for a sabaki result here: White could indeed connect at p, too, but that may be too heavy in practical play. 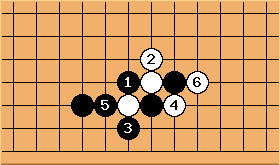 atari then, given a good ladder, White should be happy up to

as kikashi and look to create a good ladder by fighting. 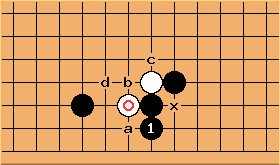 here has been played by some very strong players, recently. It looks submissive, and White may not feel inclined to continue here.

It was played in a title match O Rissei-Yoda Norimoto (B)1996-04-04 (colours reversed) Later White played down with a as a kind of inducing move: after Black b, White c, Black d White had stones in the centre and a serious cut at x to target.

Well, this happens anyway in the typical case:

is the typical move. Other frequent plays are a and b. The attachment at c is not common.

When the stone on the left is high, the critical area is still on the right.

remains by far the most common play. Now however, the idea of pressing down with b or c is more common than the invasion at d. The attachment at e remains rare. Yi Chu-yong (W) - Cho Hun-hyeon, 26th Wangwi League?, 1991-07-26 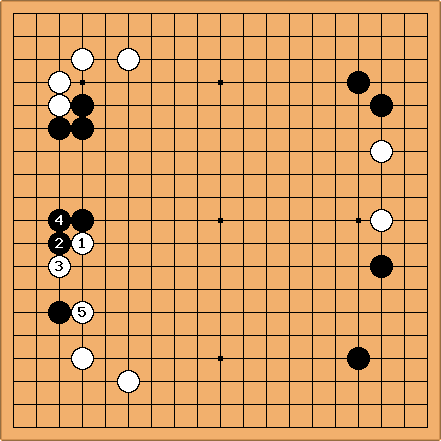 The invasion starting with

is seen when Black's position after

will be overconcentrated. This is one typical case. 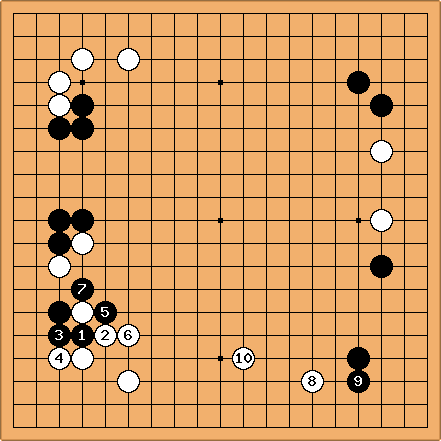 The game continued like this. Notice that Black has played a total of 8 stones in the lower left side, capturing just 3 White stones. 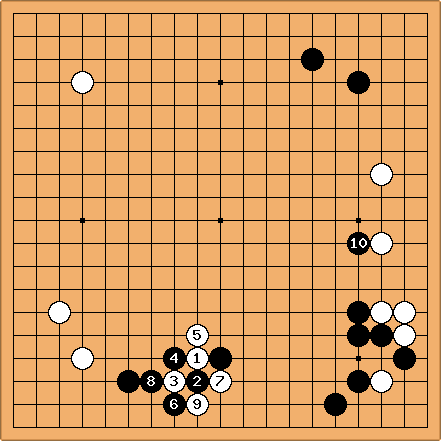 In this example Black responds aggressively with the cut at

which attempts to break the ladder on the lower side... 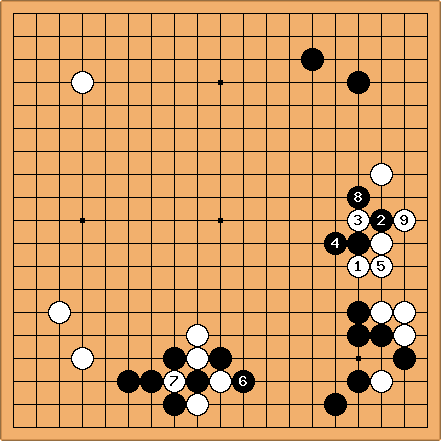 When White responds with

the right side transposes into the second example of the attachment invasion in this game. With

White repeats the cut that Black played on the lower side.

One Example of the attachment can be seen at BQM 384