There is an SL list of the nine standard enclosures. It uses an enclosure notation, which is unpopular from the point of view of discursive discussion (just as Linnaean names in biology are conversation-stoppers). See discussion now being moved to enclosure nomenclature.

Of the less usual enclosures, the most popular are

Almost all unusual enclosures are centrally-oriented, because they are weak in the corner. The enclosures based on 4-4 points are influence-oriented, except the 4463 enclosure for which the 3-3 invasion lives only in ko (normally).

The other classical enclosure is

The 3445 and 3446 enclosures are typical special techniques in the Chinese fuseki and mini-chinese, for positions in which 3454 wouldn't be ambitious enough.

3374 is perhaps mid-way between an enclosure and an extension. It has been played by Seo Pong-su.

The 3473 enclosure is actually a move with a long history - Dosaku played it - normally played for reasons of fighting or balance on the side. O Meien has tried it.

3483, played free-standing rather than in a kind of Chinese formation, is in fashion in 2002 with Yang Yi and Wang Lei Sr..

Yi Ch'ang-ho has tried the 3553 enclosure more than once.

The 3563 enclosure has been played by O Meien and also played by Zhou Heyang.

Recently O Meien has used the 3564 enclosure many times.

The 3583 enclosure was tried by Kamimura Kunio.

The Chinese enclosure 3493 has of course been given a great deal of attention in relation with the Chinese fuseki and its variants.

3584 has been played in recent times by Otake Hideo.

The 35103 enclosure, if you could call it that, is quite common, relatively speaking; as is the 3593 enclosure.

Discussion of the 35113 enclosure at 3-5 point distant low approach.

The nineteenth century player Takasaki Tainosuke experimented with 3683 and 4674.

Ma Xiaochun has played 4475 more than once.

The 45103 enclosure had an outing in eighteenth century go.

Sometimes a player stakes out a bigger corner with an irregular shimari. 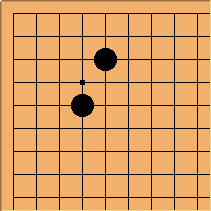 How do you handle it?. For example: 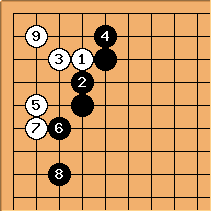 Black gets influence and white can live in the corner comfortably. 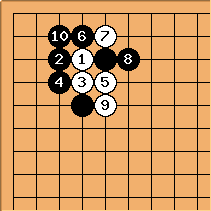 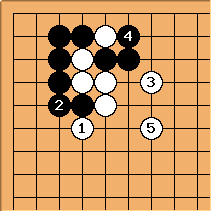 Now black has territory in the corner and white some influence in the center.

Bill: How does White handle this hane? 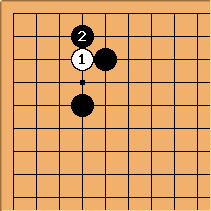 Usually it is not so good to enter at San-San: 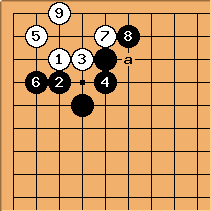 White lives on smaller scale. On the other hand there is a cutting point at a.

Bill: How about this? 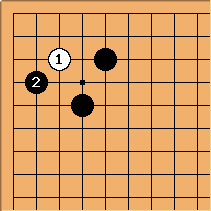 MDH Here is a different one that I played against recently. White ended with seki in the corner. 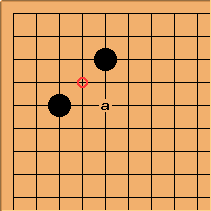 How do you handle it?.

Bob McGuigan: Yi Chang Ho has played this pattern. There are a few games on GoBase. It seems White doesn't invade the corner immediately, but waits to see how things develop on the left and top sides. A common followup play for Black is at a. Even after this there is still aji for a White play at the star point.