Positions in which one side makes a double enclosure based on a 3-4 point are called ryojimari (ryōjimari) in Japanese. 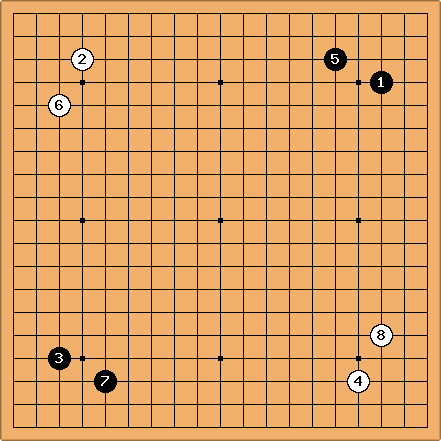 This is a simple opening pattern.

have been played for about 300 years without ever really being out of fashion (see regulation fuseki).

is played. But it is seen in contemporary Go (for example Kato Masao-Cho Chikun 1988 Honinbo League).

Clearly enough, there are two types of ryojimari positions: those arising from parallel openings, and those such as the example arising from diagonal openings. In either case there is a superficial simplicity in the opening, because it is joseki-less. These openings, however, when played by pros, tend to make up for that because the fighting that arises becomes a technical exercise in middlegame joseki.

One can therefore break down the study of these openings to some extent:

In real examples, these all fit together somehow. It is quite common to use ryojimari positions to make very basic problems about choice of big points and extensions.

The scope of these openings is naturally increased if one admits the 3-3 point as an honorary 'enclosure'; or various kinds of unusual enclosures too.