The two-space high enclosure, also known as the AlphaGo enclosure, is a corner enclosure that was popularized by AI. It emphasizes outside influence at the expense of leaving the corner territory easily invadable. In many circumstances, Black is willing to take a local loss in exchange for benefits elsewhere on the board. This enclosure is very sensitive to the overall board landscape and a ladder, and it has many complicated variations that can result in fighting. Stone efficiency is an important consideration, and in many cases it can be inefficient for Black to invest additional moves to defend the corner after playing this enclosure.

Classically speaking, this enclosure was the rarest of the four enclosures. It does not appear in Essential Joseki, Enclosure Josekis, Ishida's Joseki Dictionary, Keshi and Uchikomi - Reduction and Invasion in Go, A Dictionary Of Modern Fuseki, The Korean Style or Kihon Fuseki Jiten. There is some discussion of this shimari in the Japanese book Shimari no Gihou (Shimari Techniques) by Ishida Yoshio 9p, published in 2002 by Kawade Shobou Shinsha, ISBN 4-309-26570-7. [1] 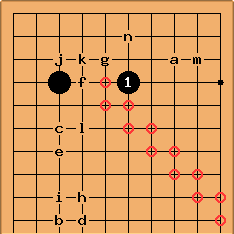 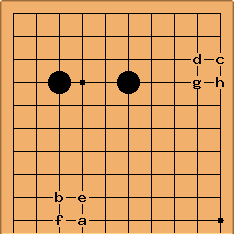 The extension is big

When to play the one-space low opposite approach?

When to play the two-space low opposite approach?

When to attach directly at the 4-4? 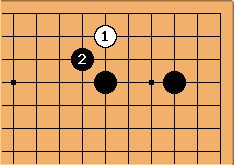 tends to lead to White living in the corner and Black building strength on the outside or facing the upper side.