In ordinary circumstances, invading the 3-3 point in a 4-4 6-3 enclosure leads to ko for life. However, if the player with the enclosure has strong supporting stones outside, then they may attempt to kill the invading stone outright.

Charles Matthews has a

Setpiece Kos. He pays careful attention to the overall context of the game and Blacks outside strength. 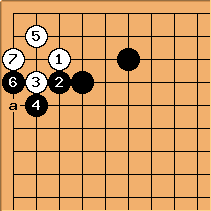 There are two standard josekis for the 3-3 invasion, both leading to ko for life. If White wins this ko, then White captures at a, which can cause considerable damage to Blacks position. 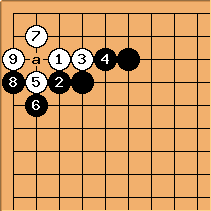 before starting the ko. But beware of the possibility of 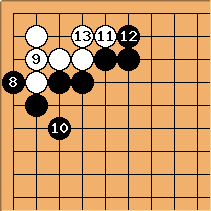 If White is already thick outside, she can also consider playing

here. Assuming Black has to protect his cut with

, White lives unconditionally. Black is very thick and has sente, but White has managed to destroy all the points in the corner. 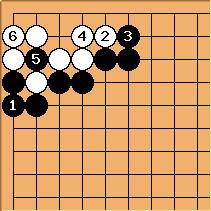 If Black cannot win the ko, then

can minimize the damage, but it must be considered a concession to White. However, 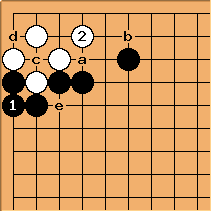 For standard joseki 1, a Black concession at

can be answered by

or a. Which is the better move depends on the surrounding stones. In practice it would be hard to kill the corner after

: White must have many local ko threats such as b. Black would quite like to exchange Black c for White d, to relieve shortage of liberties around the cutting point at e - but this also helps White form eyes. 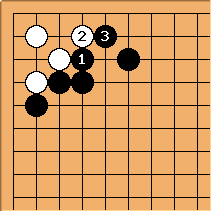 Another way Black can ignore the ko is to play at

exchange, White can fix the corner and live unconditionally, but often White can simply tenuki because Black can only kill the corner through a ko - something that Black had originally avoided in the first place. 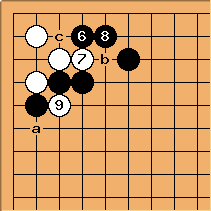 kill outright, then usually White can cut at

. Without additional supporting Black stones, Black would be in serious trouble. If circumstances does not allow

, then a possible alternative is a.

Also note that if

is played at b, then White lives at c. 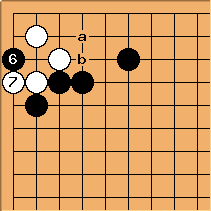 Black can also attempt to kill outright with the placement at

is a possible reply, and if Black continues with a then White can push at b as before. 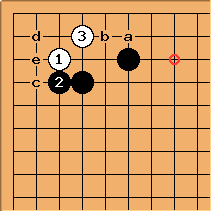 In some cases, it may also be possible to play at the diagonal move at

. This move emphasizes the subsequent attachment at a, particularly if there is a White stone at

. Possible Black responses include b (attempting to revert to ko), c (emphasizing the subsequent jump into the corner at d), and e (allowing White to live unconditionally but in a low position and possibly hurting the White stone at 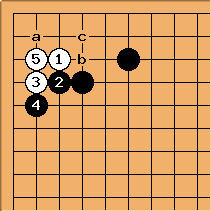 This situation should not be confused with 4-4 point, low approach, low extension, 3-3 invasion: the solid connection at

is not the normal move here.

is usually inferior to directly starting a ko at a. Depending on circumstances, Black can choose to to make ko at b or go for the kill at c. 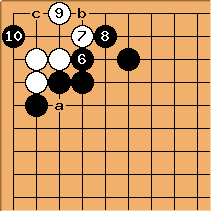 One of the simplest Black responses is to simply bend at

, but this simple move is also solid because it implicitly protects against the cutting point at a. White still can make a ko with

is played as the descent at b, then the placement at c kills the corner unconditionally. 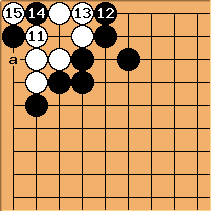 White takes the ko first at

. For details of this standard corner pattern, see tripod group with extra leg.

Although White takes the ko first, there is a distinct disadvantage for her if she wins it by capturing at a: it does not threaten any outside Black stones. Compare that with the standard joseki in the following diagram. 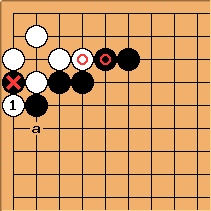 In the standard josekis (with or without the

exchange), when White wins the ko, she captures at

, seriously threatening Blacks left side unless he defends at a.

Black goes for the kill, with cut aji 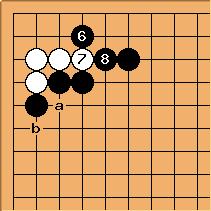 Another possible Black response is to jump down at

, giving sufficient space for White to make only one eye in the corner. Typically

will block, and White can now choose to cut at a or clamp at b. Whether any of these moves will work out for either player will often hinge on the surrounding stones; without any supporting stones the result is often unfavourable for White. 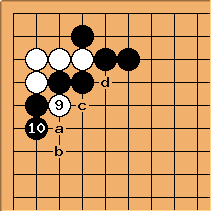 is the only move. Subsequently, White may start a possibly large scale fight by pressing down at a, with the result heavily hinging on the surrounding stones. When there are no support stones around, it is sufficient for Black to play at b, and White cannot get a good result because locally the corner is dead. In the absence of supporting stones,

playing at c, Black d, White b to push Black low is unreasonable; Black a can push through. 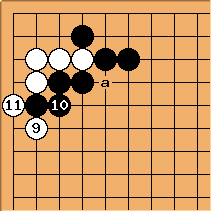 White can also clamp at

. This variation will typically be unfavourable for White because Whites position will be low. However, Black has to watch out for the cutting point at a.

In any case, if White ends up in this position, White would be crawling along the second line. Repeated playing of this variation would allow the White player to get strong at crawl. White would be better off playing the 4-4 6-3 enclosure, 2-4 approach rather than the 3-3 invasion. 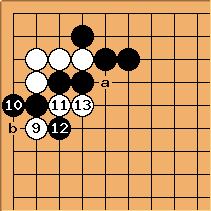 stone is an overplay. After

, a and b are miai so Blacks position collapses. 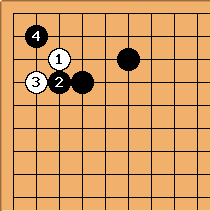 kb: An interesting counter to the 3-3 showed up in one of my games. 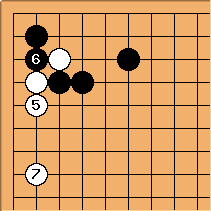 kb: In my game, I continued with

, giving up the corner for the side (I had a little bit of strength on the left side to support these stones). My question, though, is what is the best way to continue locally in this situation (assuming Black has strength first in one direction, the other, both, and neither)? I didn't find any matches in Gobase. 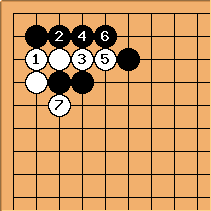 Matlock?: I think this is a mistake for Black. White can get a similar but much better result (or life in the corner if Black blocks on the outside). 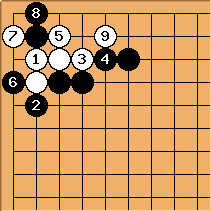 Matlock?: The 2-2 point response appears twice in Waltheri's go pattern search (as of 2015-03-19). In one case Whites 3-3 invasion looked like a mistake, as she invaded a strong position where Blacks response actually worked and White could not escape. In the other case, White was able to make life in the corner.