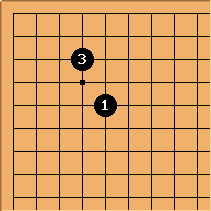 Hikaru79: Does this even count as an enclosure? It seems overly greedy to me. What's the best way to take advantage of it?

unkx80: I think one way to deal with weird enclosures is to ignore it for the time being, and wait for a suitable time later to exploit the aji. Usually, it takes more moves to fix a weird enclosure than to have a proper enclosure. Sometimes people play weird enclosures with a psychological purpose, opponents who have never seen such enclosures before will want to act immediately and then the player's weird enclosure plan succeeds. 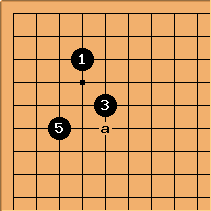 Bill: unkx80 makes an excellent point. In this case another play is needed to secure the corner, such as

might be better placed at a. That's a fine point, but these unorthodox moves are not as bad as they may appear. ;-)