In relation to the marked white stone,

is an angle play. After the contact play, the angle play is the most direct way to play against a stone of the opponent's.

The shoulderhit, footsweep, and ago plays are all special cases of angle plays; see also compromised diagonal. The Japanese term kado is the closest equivalent. 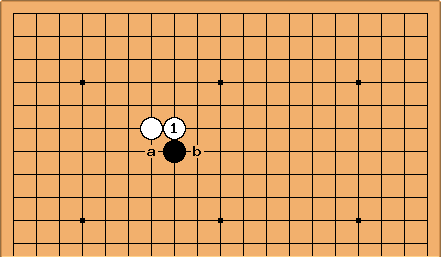 or a in reply. This is likely to lead into a fight with two characteristics:

For example Black at b will often cause a pushing battle. White has the initial choice of direction of play. The fights arising after contact and angle plays are often classified together as 'contact fights'. They are the most violent developments from a single stone, and very urgent.

Therefore angle plays must be used with caution: they don't by any means promise an advantage. See for example angle play after diagonal attachment, angle play attack.