Given some white territory and black thickness at the lower side, which is more or less played out, where to play as Black?

Both the thrust at a and the hane of c or the nobi at b are "hot" plays. Charles Matthews suggests the upper right is hotter. Suppose however, we go Upper left first. 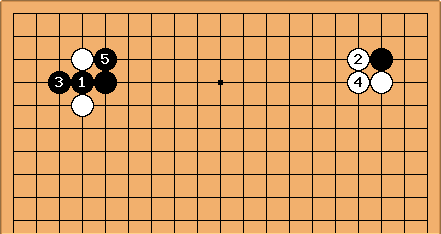 Both sides play tenuki. Black's stone upper right has no scope for development, while there White's upper left upper stone can still move with a. However, Black has sente and can block at a. This result seems equal to me.

DaveSigaty: Here I think that Black 3 is so good that White cannot play tenuki. Kagayama writes about this in Lessons in the Fundamentals of Go (Chapter Two - Cutting and Connecting). At the end of this diagram, Black has swallowed up two white stones in the upper left by cutting them apart. Meanwhile White has taken one black stone on the upper right. In effect they have each invested two stones (net played) in their respective corners. However, Black has gained much more than White. The upper left is significantly larger than the upper right. White must answer 1 at 3.

Now start at the upper right: 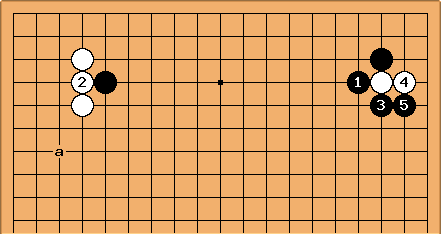 Black takes 15 points and influence to both sides, but a little bit of aji is left. White also takes 15 points, but her territory is open. She can choose to use her sente at a. Her influence along the top is somewhat mitigated by the black stone. This result is probably better for Black.

These are the results when both sides invest in one area each. If White starts competing in the area where Black plays, she might get the worst of both worlds.

DaveSigaty: I would view this last a little differently. 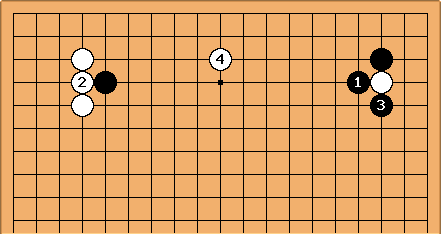 Both sides have played two moves. Who stands better? A big issue that I have with the upper right is that Black has wrapped around a low stone. I think that any form of tewari analysis of the upper right (i.e. remove the white stone and any black stone you choose) will show that Black's formation is inefficient. 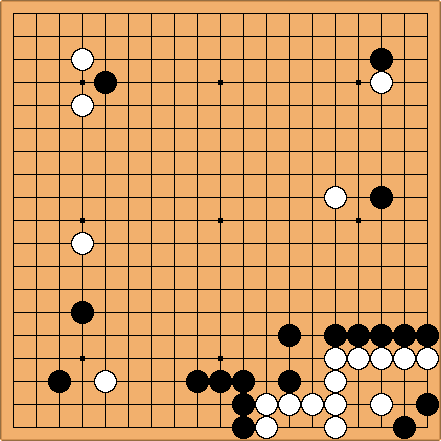 I just saw the original post in rec.games.go as shown here. Black has overwhelming thickness. I imagine that Charles Matthews' assessment was based on the whole board position. He may or may not feel the same way looking at just the upper side.

Charles Matthews Mmm - as I recall, someone was asking about this odd position from a strange source. Black is pretty clearly ahead, because of all the influence lower right. Since this looks much like a beginners' game, it is hard to say more. 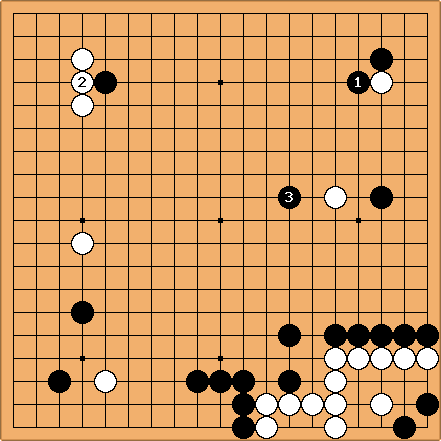 Black ought to play very aggressively on the right side. For example the ultra-cap 3. Anyway it seemed to me that globally Black should favour the upper right.