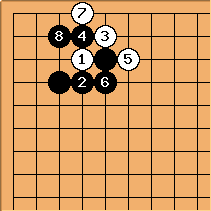 as forcing moves, serving to create something at the top. 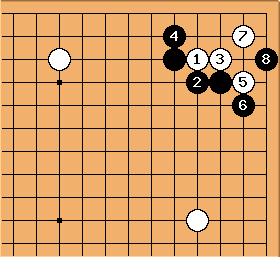 If White has neighbouring stones, she can start thinking about persisting with the invasion. If the stones are far away, Black can still kill the invasion. But his surrounding position is quite thin and if the conditions become favourable, White has a possibility to cut and make a fight of it. 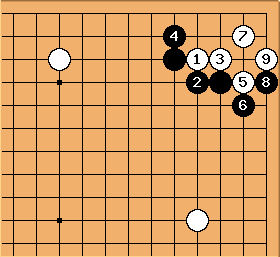 is this atari, then White can make a ko-fight of it. Usually this type of ko is a I-lose-nothing-ko. Any compensation for the group is good. 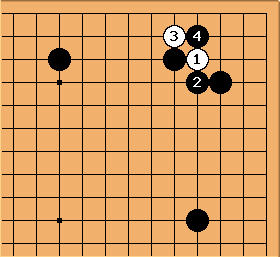 This pattern appears often when black is strong. In fact, white will sometimes tenuki after this and come back to do something with it later. 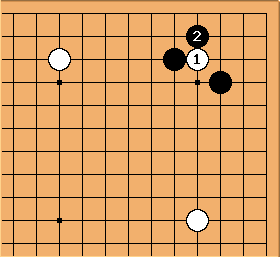 If White is considered very strong at the outside, Black could also consider this move for defending (see sabaki for a continuation). This is also discussed at light play example 4

This way of playing seems more appropriate if Black, not White, is strong and has stones around the side-hoshis. See for example part 9 of Charles Matthews excellent 'Setpiece Kos' series. There, move 2 above leads to an interesting ko (colors reversed).

gobase.org comes up with several games including the light play version.

These first three show the White kosumi-tesuji continuation on the 2-2 point:

In the first two games Black is very, very strong on the outside - very different from the diagrams up here where White is strong - and White uses the 5-5 shimari reducing move first, i.e. before the displayed moves. Similar but a little bit less strong is the Black position in the third game.