Add a second stone and sacrifice both

The proverb add a second stone and sacrifice both summarizes a common technique of sacrifice. Adding a stone has many possible effects:

Consider the following sequence (discussed by Sakata Eio in his book "The Middle Game of Go"). 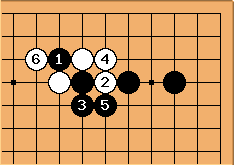 Black has just played the crosscut at

vulgar style in the context of the discussed game, but that is another matter. There are plenty of occasions where this sequence is perfectly OK.) 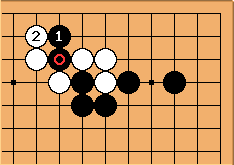 It is clear that

is going to be captured. Nevertheless Black adds another stone, in accordance with the proverb. 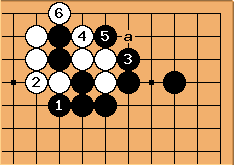 The thinking behind Black's line of play becomes clear in this diagram. Black has forcing moves at

. Thanks to his larger sacrifice, he has a move on the outside (

) and two which seal off the corner. (Note that

makes a a gote follow-up for White. See /continuation for further explanation.) 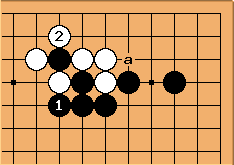 Compare this with an atari at

without adding the extra stone: White would capture (a ponnuki), and that would be the end of it. The block at a is no longer sente now. 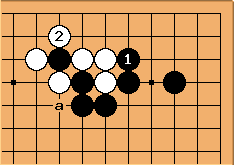 will capture and the atari at a is no longer there. 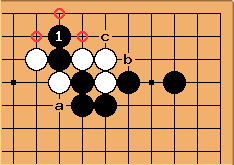 In summary: adding the extra stone increases the (marked) liberties of the black group. As White needs more moves to capture it, Black gets more forcing moves.

The simplest example is this corner shape. If Black is allowed to play at 1, he secures two eyes very efficiently. White simply adds a stone to be captured. Two stone capture consumes more eyespace for making an eye.

Making later atari not a ko

For example, Long L group with an outside liberty can only live by adding a sacrifice stone. See Diagram titled Variation 2.

Another example is from late endgame:

If Black plays at 1, he has two points of territory. White lures Black stone at 2 and recapture.

Black has got two prisoners and White one;

is worth one point in gote.