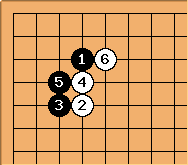 The avalanche or nadare is one of the most famous corner joseki. It arises from 3-4 point, high approach, inside contact. The diagram position leads to the avalanche pattern. The name refers to the shape resembling an avalanche (see diagram upside down).

This corner joseki used to be considered to give equal results for both players (despite the hane at the head of White's stones). However, AI analysis (as of October 2018) seems to indicate that the position is generally unfavorable for White.

Of the several variants, the large avalanche is the most famous for its complexity. This variation has many subvariations that can grow to cover over a third of the board. The other variants typically end up with White getting outside influence. With the exception of small avalanche, the influence will face towards the right side, and White will end up in gote. Therefore, the avalanche is usually played when White has a position at the upper-right corner (e.g., a White stone at the 4-4 point), and is not played when Black has a stone at the top-middle star point. 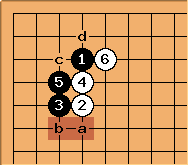 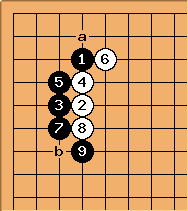 The large avalanche joseki begins with the hane at

. It starts a number of complicated variations. See large avalanche for these. If either player wants to avoid these complications, White can play at a or play tenuki (move elsewhere) with

, or Black can play at a or b with

. These are described in large avalanche simple variations. 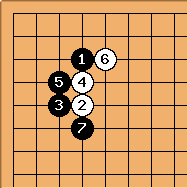 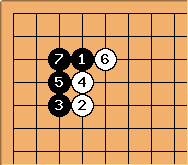 is advisable for those players who are not comfortable with their knowledge of the avalanche joseki. Black steers the joseki to a simple variation without giving in in any way - the result is equal. See avalanche - connection. 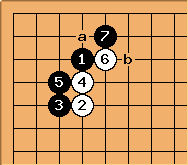 in this diagram. Traditionally, the answer to this move has been a, after which usually Black will try to get influence down the left side, but nowadays the white extension at b is gaining popularity. For the double hane variation, see avalanche - double hane. 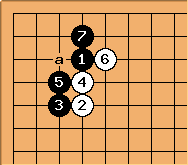 is similar to black a in that it is peaceful and takes territory. For this variation, see avalanche - descent. 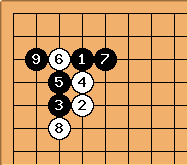 here would be a mistake. After

, White has no good move. 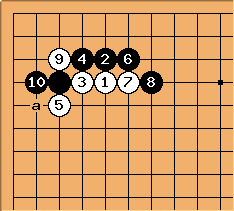 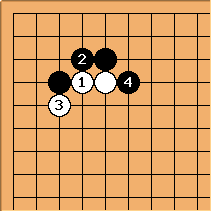 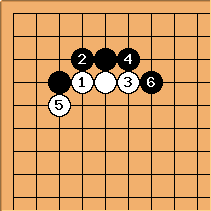