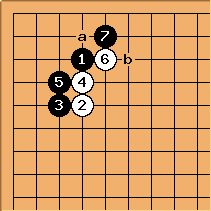 is the a variation of the avalanche joseki. The normal answer to this move is white a, but white b has been played as well. 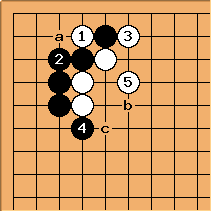 , White captures a stone making shape, while Black takes the key point with

. Next, a is a large point for both, while b is a nice tesuji for Black. Black c is not considered joseki: Black b is better. 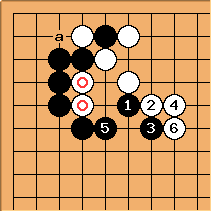 Black a is a big move (note that White is not guaranteed to answer it, though), but if Black wants to increase his influence, Black will play at

instead. The forceful response of

is White's best answer. Black should not play at

makes too good a shape. Neither player should place much importance on the

stones in this variation. White can also play

and try to get the best out of the ensuing fight. 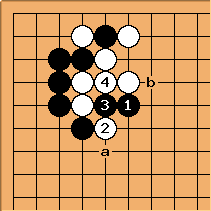 is possible too. The position quickly ramifies: 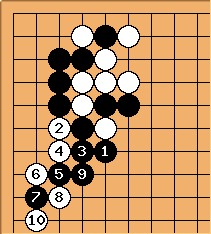 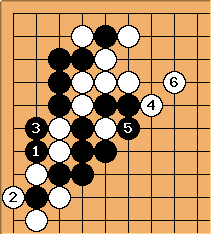 White has influence on both sides 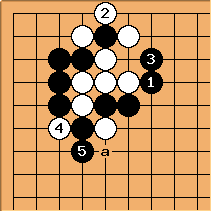 is not such a good idea. Although the pressure is on White's top group, Black has cutting points all over the place. 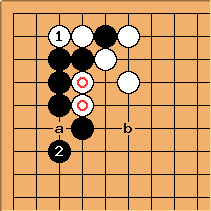 is larger than it looks (a black play at the same point is also large). White threatens to cut at a:

is a peaceful answer. The value of the

stones is even lower than before. White can also choose to play in the center at b instead of 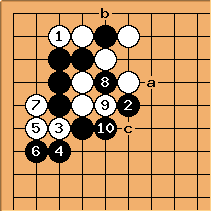 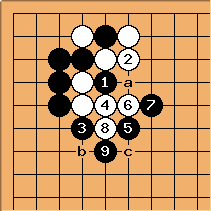 Black can also play atari at

. Although it looks vulgar, this is a viable way of playing. The correct continuation for Black is

: other moves do not work out well. After White captures with a, Black can connect either at b or at c.