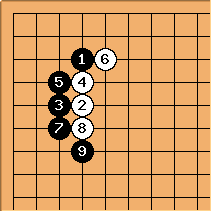 In this diagram we see the beginning of the large avalanche joseki. This joseki is quite complex, and one might want to avoid it. On this page, we will go into some variations where after

the large avalanche is avoided because either 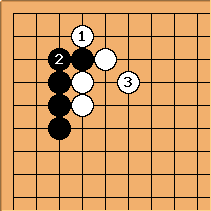 For White, a simple variation is the one in this diagram. White sometimes plays tenuki instead of

, or an extension along the upper side. In that case, she of course will have to be willing to regard her stones in this corner as easily sacrificed forcing moves. 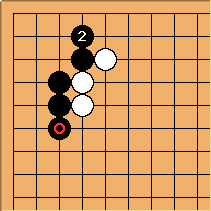 White playing tenuki after the marked black stone is not uncommon. White treats her stones here in a light way. Because Black has played all his stones on the inside, it might be argued that the white stones are merely forcing moves. If White does so,

is a good follow-up for Black. Rather than a complete tenuki,

might also be an extension along the upper side. If Black does not play

, White will probably soon give atari there herself, converting the position to that in the previous diagram. 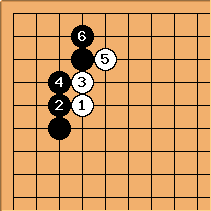 The same position can arise through this forcing sequence against the large knights move enclosure. This sequence is joseki, but in general advised against playing too early, so probably the result must be regarded slightly better for Black, but not disturbingly so. 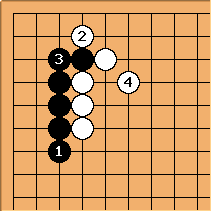 If Black wants to avoid the large avalanche,

would be the normal move. White will probably play the atari at

next, but she might decide to play tenuki instead of

can be regarded slightly submissive, this variation has been played in games between high-ranking professionals. 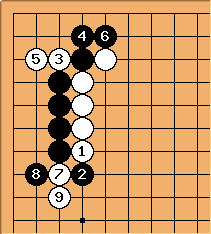 is an overplay. Because of his extra stone, the fight in the corner will go well for Black. 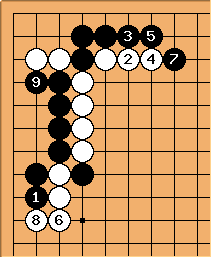 Black's profit makes this a good result for him. 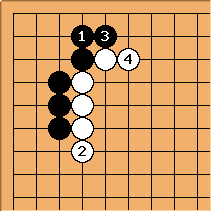 Another simple variation for Black.