There are some josekis where Gnugo just screws up EVERY time. If you know them, you'll improve your performance against Gnugo considerably. Don't let this fool you into thinking you got stronger: Gnugo just never learns (unless it's a version update). By adapting my playing style to Gnugo, I can improve my results in games against Gnugo by about 100 points, compared to normal style.

I will add more when I have time. Feel free to add your own nosekis if Gnugo regularly plays them. 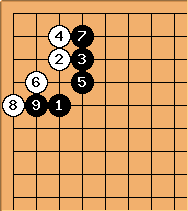 is a totally inhumane move 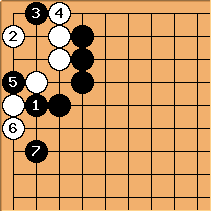 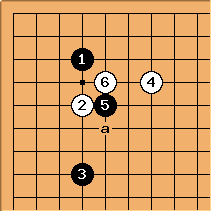 at a would be Joseki, if you play like in the diagram, Gnugo doesnt know how to continue and plays tenuki 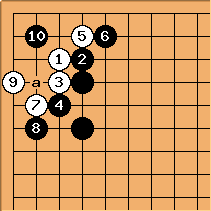 3-3 Invasion when black has played 4-6 (Gnugo is white). There is a Joseki with

at A which lives(see 4464 enclosure 3-3 invasion), but Gnugo obviously doesnt know it. W dies unconditionally. 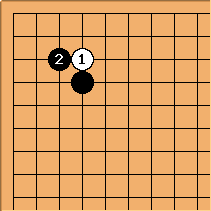 MrTenuki: The following sequence is seen in a 4-stone handicap game. Gnugo is black. The initial score estimate says "Black is ahead by 39.1 points." The first move seems reasonable, but the follow-up is... let's say submissive. 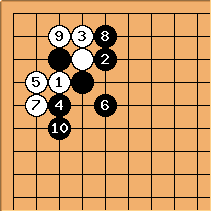 White seems to be confined to the corner, but... 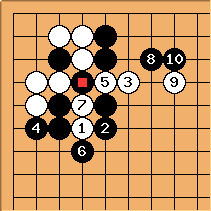 is an atari against the marked stone; 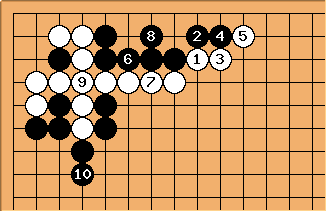 is normally an overplay, but Gnugo decides to play submissively, and white gets to connect at

, white ends in sente and has both influence and territory. Now the score estimate becomes "Black is ahead by 26.4 points." Please note that you can't repeat this in another corner, because black will tenuki to take big points. 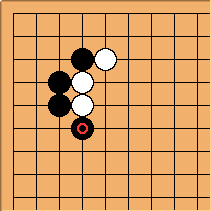 Starline: Sometimes GnuGo plays the avalanche joseki as White. If you hane to start the small avalanche, it will play terribly. Every time. 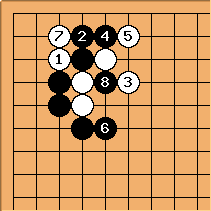 Moves 3, 5, and 7 are all mistakes. The sacrifice at 8 is the key to punishment. 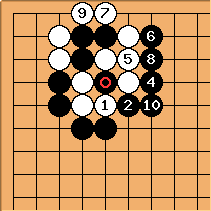 This is a terrible result for White. Through this sente squeeze sequence, Black gains great influence.

In one of my games, GnuGo actually played 7 at 8. Needless to say, it did not go well.

Reporting mistakes to the programmers

ihgo: The best reaction on such gnugo mistakes is to send an enhancement request to gnugo@gnu.org, the gnugo guys are very friendly (even better would be to code for the gnugo project...).

AndreasTeckentrup: Unfortunately, I am not a programmer, but I think that correcting single pattern mistakes won't help overall performance much. The aim of this page is not to deride or improve Gnugo, but to give some examples for the problems of computer go in general. I like the idea of Gnugo, and the program is one of the best available, so please don't think that I meant any disrespect to Gnugo with this page.

Steve: Hi Andreas. I think reporting these patterns are useful because the way programmers approach solving these problems (like debugging) involves looking at what causes the mistake, rather than just hard-coding a better move for specific situations. Thus, your reports may lead to new considerations for GnuGo's strategy, and perhaps a potential breakthrough in computer Go.

Imagist: I think that in general the problem with GnuGo is that it plays too submissively. Also, I don't think it understands the proverb "urgent points before big points". This is speaking as someone only two ranks stronger than GnuGo on KGS, though, so I may not know what I'm talking about. :)

Blake: Playing GnuGo, I get the impression that one of its major problems is that it doesn't understand the importance of connecting groups, and it doesn't check old groups at each move to make sure that they're still connected. I usually get behind on the board when I play GnuGo, because its fuseki isn't bad and mine is horrible. However, during the course of the game, I can usually kill two or three groups with a splitting attack, and end up winning by 50. (I won by 120 in a game tonight.) It's also very poor at cutting off the human's groups.

Cazort: On the 9x9 I find that GnuGo often abandons one or two of the first 3 stones it places, without gaining much in compensation. It reliably lets me totally kill stones placed on the 3x3 or 3x4 spots, sometimes without getting anything reasonable in compensation. This often results in a very huge win (out of proportion to the amounts I am usually able to win by when this does not happen). When I see a new player doing something like this I ask them a question: "What is the purpose behind your plays? What are you gaining by giving up those stones? If you give them up without gaining anything, why did you play them in the first place?" It seems the programmers might benefit from asking this question.

anonymous: I just start at tengen and blindly play anywhere above GnuGo, and wins a lot.

anonymous2: for some reason, if you start by the four 6-6 points it leaves half of the board to you.