The Shōwa period, or Shōwa era, (Japanese: 昭和時代, Hepburn: Shōwa jidai), meaning "period of enlightened peace/harmony" or "period of radiant Japan," refers to the period of Japanese history corresponding to the reign of Emperor Hirohito, from December 25, 1926 until his death on January 7, 1989. The Shōwa period was longer than the reign of any previous Japanese emperor. It was preceded by the Taisho period and succeeded by the Heisei.

Around 1950, this nirensei opening in Go Seigen style was called "Shōwa period 1-3-5" (昭和の一、三、五), an homage to Shusaku's 1-3-5 fuseki. (This was translated as the "Shōwa fuseki" in Go Review, Iss. Spring 1976.) However, it was unexpected that the Shōwa period would last more than 60 years, thereby causing the homage to describe a period far longer than intended. 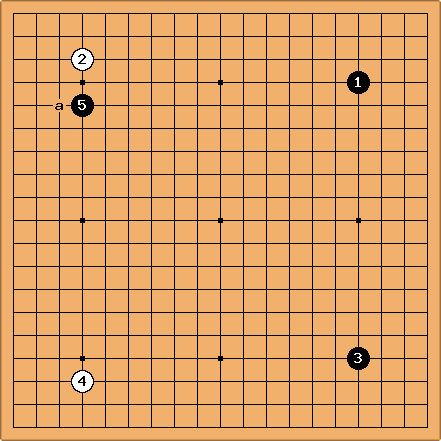 In sharp contrast to the Shusaku's classical 1-3-5, all stones are on the 4th line and the two star points emphasize freedom of development in either direction. If White replies at a, Black may play the Avalanche joseki to get strong influence in the center.