My question pertains to outside contact on a 3-4 approach to a 5-4 stone. 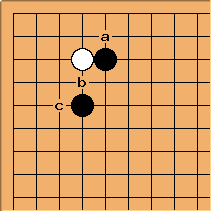 The only response for White given in Essential Joseki is at a. However, most players my level (now 5k* IGS) don't seem to know that that's the right way to play. At 6k*, they used to usually play at b, much to my sadistic delight (see Six Kyu Noseki for why this is a terrible move). However, at 5k*, I've started seeing c, to which I'm not quite sure how to answer. 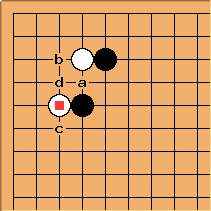 Simply playing at a occurs to me as a possibility, but with the inevitable White answer at d, Black has played into a Hane at the Head of Two Stones, so that's probably not so good. Instead, I usually play at b, in order to confuse my opponent as much as he confused me. From there, things inevitably get complicated, and sometimes it goes my way, sometimes not. I also thought about the hane at c.

So, basically, the question is, how should I be answering the marked White stone? a, b, c, or something else entirely? 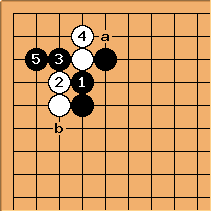 unkx80: I think this is very straightforward once you know the refutation. After

, a and b are miai so white collapses.

Alex Weldon: Thank you for your prompt response. I didn't manage to see that refutation until you pointed it out, but it is now clear that this White move is even worse than the Six Kyu Noseki. :) 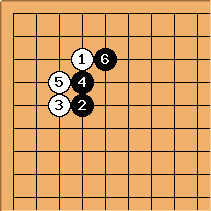 Andre Engels: Note that the same position would be reached if white played tenuki after starting the avalanche pattern as can be seen here. Naturally, given unkx80's variant above, to play tenuki at this point is not considered joseki.