Go World readers will remember a lucidly written thirteen-part series by Oya, some years back, on joseki innovations from Korea (The Korean Style: Korean Joseki Innovation. Parts 1-13 Go World 86  88, and 100  109). It probably left many readers wishing for a book-length treatment, by the same author, of more innovations; and the present volume does not disappoint. It discusses 45 recently developed (or recently taken seriously by pros) josekis. There is very little overlap with the Go World series. While only a few of the joseki are specifically identified as originating outside of Japan --from Korea or China, particularly-- the preface speaks of the current international climate of joseki development (not to mention the subtitle); so presumably many of them have been influenced by the clash of distinct national styles. A few have been favored by particular pros, but apparently not much played otherwise until recently.

Formally, the book is organized like a dictionary, with miniature diagrams serving as entries in the table of contents. Each section begins with a single theme diagram, displaying the initial moves of a joseki, with the new move explicitly identified in the accompanying text. The main discussion then employs three quarter-board diagrams per page, setting out the move sequences. A few whole-board issues (such as ladders) are explained in the text and, in addition, many sections include a few illustrative whole-board diagrams taken from professional games played within the last few years. But the main focus is on the local sequences, not on over-all strategy.

Actually, the book is more than a dictionary. While not as chatty as in his earlier series, Oya still provides considerable instructional commentary: he stresses key moves which must not be omitted, poor moves which must be avoided, vital points which must be seized, motivating shape considerations, and potential tactical pitfalls. He also occasionally discusses closely related conventional lines of play, to highlight the contrasting new ideas. As a unifying mechanism, he sometimes takes advantage of similarities of shape to shorten the discussions of later josekis via reference to earlier diagrams. But he also highlights seemingly minor shape differences which actually have important consequences.

Anyhow, in each section he singles out some main lines of play with the welcome caption "osusume" -- "recommended". These, he says, should be mastered first, and can be counted on for even results in ordinary circumstances. Other lines which aren't dismissed as downright inferior are characterized in the discussion as interesting playable alternatives, or sharp but difficult, or just too risky to try (in important games, presumably).

It is up to the reader to know how to match a joseki to the overall position. This book should be most appreciated by players within a few stones of shodan, and stronger, who are already at least a little familiar with some of the joseki lines from which the present ones depart. It is possible to read the entire book through, to get a quick feel for what's new; but serious study will be done in smaller doses. Also, I suspect that a strong player could learn a fair amount from the diagrams alone, without reading knowledge of Japanese. (But note: osusume = おすすめ.) 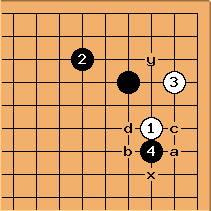 is the innovation. Oya examines responses beginning with W hane at either a or b. He also briefly considers Wc and Wd but finds them to be inferior. Later he examines the same

is on the 4th line instead of the third. (These josekis were also discussed in the Go World series.)

at x, a standard joseki, allows W to play in the corner at y. The new 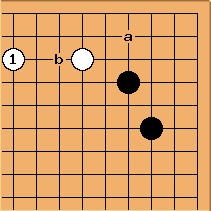 If W finds the variations of the previous josekis too intimidating, then playing

instead of Wa, so as to forestall Bb, leads to a perfectly adequate game for W. 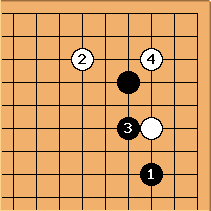 is the new move. Oya also examines related josekis in which either 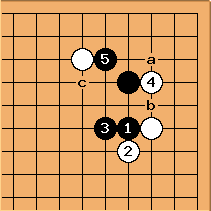 is the new move. According to Oya both Takeo Kajiwara and Yamashita Keigo have explored this joseki.

at a would be more standard. In response to the present

, Wb or Wc may look natural, but B does too well, and a variation beginning with

at a is recommended.

This chapter includes several other variants of the attach-and-extend joseki. From chapter 2: 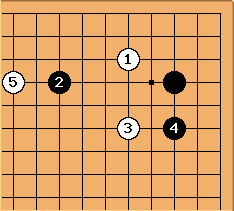 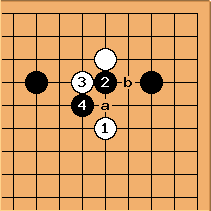 was a favored tactic of Go Seigen. Although

at a looks natural, B does too well. So Oya recommends a line of play beginning with 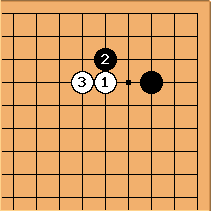 is a new lead-in to the large avalanche. 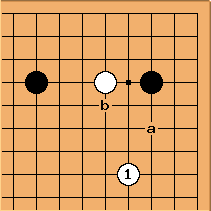 is a favorite move of Kudo Norio. Oya recommends a variation beginning with

at a, instead of contacting at b immediately. 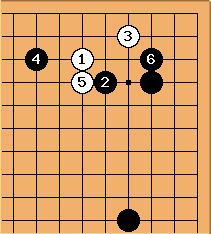 is the new move, which arose from Chinese and Korean joseki research. From chapter 3: 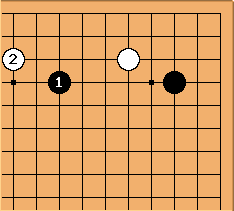 is new. Variants of this joseki are also discussed, in which the initial W kakari is high and/or

is one space closer (and then so is 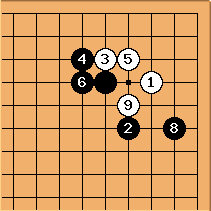 . According to Oya, Yoda Norimoto likes to play this way.

tderz: Thank you for the review - you can write so eloquent.

JOhn F. Can I suggest the title be corrected to "leading-edge josekis"?

Will do, thanks for the correction. My references translated the furigana (sai sen tan) as "ultra-fine", which I took to mean "exquisite." Next time I'll think more about the kanji themselves.

Uberdude Is this book in English or Japanese?

Bob McGuigan: It's in Japanese.

isd: Why is the title not Cutting-edge Joseki?

Main Entry: leading edge
Pronunciation: \ˈlē-diŋ-\
Function: noun
Date: 1877
1 : the forward part of something that moves or seems to move
2 : the foremost edge of an airfoil
3 : cutting edge

They also list "vanguard" as a synonym. I'd say it's a matter of taste in this case.